A SkyCity worker says he was outraged when staff were initially told yesterday they had to take annual leave if they wanted to go home as the nearby international convention centre burned. 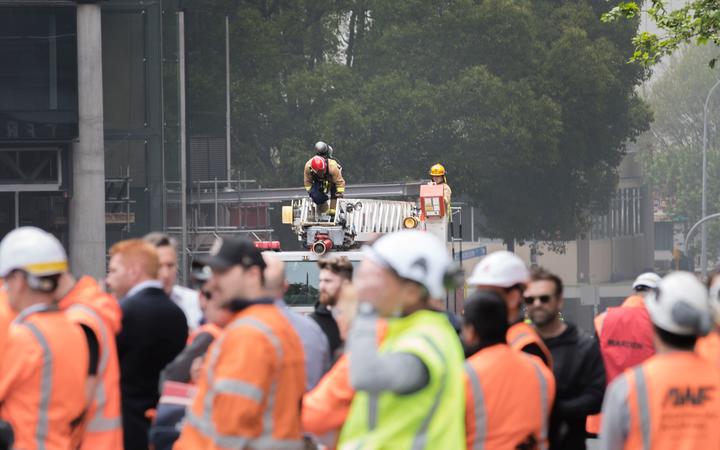 The company denied this and said it's confident with the way the Auckland CBD precinct evacuation was handled.

But at least one employee - who asked not to be identified - said it was confusing at times and there were a lot of mixed messages.

He was worried when he smelt the smoke around 1:30pm.

"It's quite serious, you're told you're all safe and then you can smell smoke in the middle of the building," he said.

"The smoke sort of disappeared for a couple of minutes but then it came back stronger and if you looked around you could see smoke within the building."

The staff member said everyone on his floor was told to move to Sky City's current convention centre shortly before 3pm.

Managers took the roll and the worker said his department had to stay behind, while others were allowed to leave.

"There were a lot of mixed signals, people from HR were saying things like 'you can go home now' to certain staff members [but] the department I was in was told to wait for the head of our department to arrive and inform us what to do," he said.

"There were talks of 'you can go home but you have to use your leave to go home, otherwise you wait here in case the centre is open later'."

He said no one wanted to go home when they were initially told they had to use their annual leave.

"It was quite the shock initially to be told that... was fairly outraged to be honest," he said.

The employee said he was eventually told at 3:45pm that he would be paid if they went home and they did not need to use their annual leave.

Out on the street, the SkyCity worker said only about a third of staff had face masks.

He was frustrated by the entire evacuation process.

"For such a dangerous time, it was really done in quite an ineffective manner - it needs to be done better if it was ever to happen again," he said.

"It was very frustrating to be a part of, confusing, different departments being told different things - you would think that the policy would have to be consistent."

Joe Carolan from Unite Union, who was with workers during the evacuation, said it was unacceptable it took an hour and a half.

"Once we smell smoke we should just get everybody out, no questions asked, no time to run sections of the business, just clear everybody out," he said.

Mr Carolan said one manager was telling staff if they wanted to go home, they could take leave.

"They had to wait until their supervisor arrived to approve that [leave], we were straight in from the union going, 'absolutely rubbish...people should be paid for this' and that argument [continued until] senior managers and supervisors arrived," he said.

But SkyCity said it was confident in the way it carried out its crisis management plan.

It said evacuations were completed early in a controlled and phased approach.

The company said because the smoke was at a contained level, the use of face masks was not deemed necessary at the time.

Taxis were also provided to workers who need transport to get home.

SkyCity chief executive Graeme Stephens was adamant it was made clear from the beginning that all staff who were rostered to work would be paid for the period the precinct was closed.

"There was never any hesitation or debate around that, so they were fully paid for shift work...no one's taking annual leave as a consequence," he said.

He told RNZ there was "no substance" to the claims that staff were told they would have to take leave if they left the area.

"I was involved in immediate decision to say staff would be compensated, they will get paid for shifts rostered and not worked. That was an immediate decision, there was no debate about it, and I'm afraid the union has been misleading with the comments it's been making."