Oil prices have tumbled and global markets are in turmoil as Donald Trump stuns the world by winning the US presidential election. 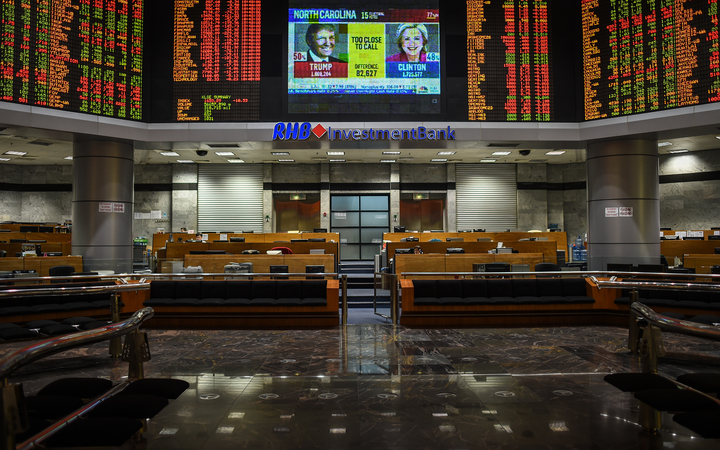 Share markets collapsed on Wednesday and the dollar tumbled against the yen and the euro as Donald Trump looked on course to win the race for the White House. Photo: MOHD RASFAN / AFP

Crude oil futures prices fell 4 percent to $43.07, their lowest since September, before recovering to $44.36.

Gold, a traditional safe-haven for investors in times of high economic risk, jumped, while the dollar fell sharply against a basket of other leading currencies.

"This is deja vu of the Brexit moment, very worrying," Bob Takai, the president at Sumitomo Corp Global Research in Tokyo, said.

In the longer-term, Mr Trump's pro-oil sector policies and anti-Iran views could result in higher prices, he said. 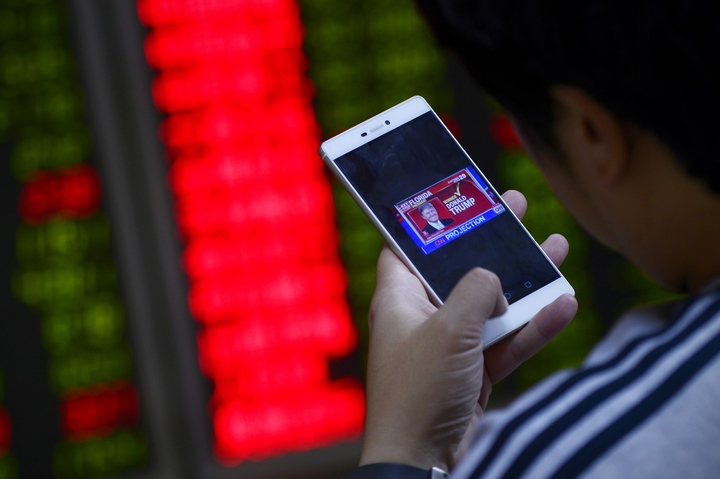 An investor looks at his phone in Beijing showing results from the US presidential election. Photo: WANG ZHAO / AFP

Earlier, as the polls closed and results started to come in, investors started to sell risky assets, such as shares and commodities, and chased the security of currencies such as the Japanese yen, the Swiss franc and gold.

The markets started the day banking on Democrat Hillary Clinton winning, but the strong showing for Mr Trump in swing states such as Florida and Ohio saw markets overturn early modest gains and head lower.

Earlier, the New Zealand sharemarket, which was up about 0.3 percent in early trading, fell nearly 2 percent in less than an hour, and closed down more than 3 percent - or 230 points to 6664 - to a four-month low, as Mr Trump's numbers started to look promising.

Other stock markets in Australia and Asia also turned negative.

The yen was stronger across the board, while gold leapt more than 2 percent and oil fell by the same amount.

The New Zealand dollar held its own against the US dollar around 73.4 cents, but was weaker against the British pound and the euro.

It finished the day about a third of a cent lower against the US dollar, but fell more than 3 percent against the yen.

It finished sharply lower against the euro and British pound.

The Mexican peso, meanwhile, has collapsed. It was down by more than 13 percent in after-market trading for Mexico and, in Wednesday trading in Asia, breaking 20 pesos per dollar - its biggest fall since the 1994 Tequila Crisis.

"There's a lot of panic in the market, it is definitely an outcome it was not expecting," said Juan Carlos Alderete, a strategist at Banorte-IXE.

Mexico's central bank has called a joint news conference with the Finance Ministry for 7am (local time).

Mr Trump's threats to rip up a free trade agreement with Mexico and tax money sent home by migrants to pay for a wall on the southern US border once elected president made the peso particularly reactive to events in the race for the White House.