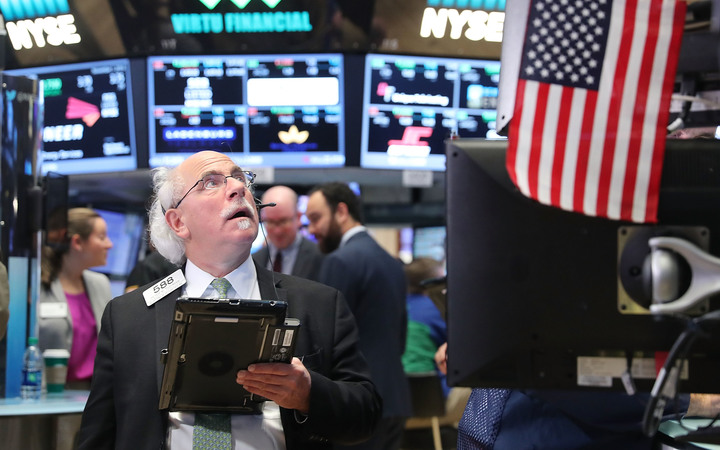 Traders work on the floor of the New York Stock Exchange on 1 November, 2016. Photo: AFP

While most national polls still favor Democrat Hillary Clinton to win, she has lost the comfortable lead she held late last month and investors are starting to factor in the possibility that Republican Donald Trump might pull off a victory on 8 November.

World stocks, the US dollar and oil all fell on Wednesday, while safe-haven assets such as gold and the Swiss franc rose as investors showed nerves over the tightening race.

"The lead up to the US presidential election was always expected to be lively but the events of the last couple of days have seriously taken their toll on investor sentiment," Craig Erlam, senior market analyst at Oanda foreign exchange company in London, said.

Investor anxiety has deepened in recent sessions over a possible Trump victory, given uncertainty about his stance on issues including foreign policy, trade relations and immigrants. Mrs Clinton is viewed by markets as a candidate of the status quo.

Currency traders have sold the US dollar this week in part because they suspect Mr Trump would prefer a weaker dollar given his protectionist stance on international trade, and in part because the uncertainty surrounding a Trump win might lead to a more dovish stance from the Federal Reserve in the months ahead.

A Reuters equity market poll last month showed a majority of forecasters predicted US stocks would perform better under a Clinton presidency than a Trump administration.

US stocks were also lower after the Federal Reserve, in its last policy decision before the election, kept interest rates unchanged but signalled it could hike them in December.

Mrs Clinton's narrowing lead over Mr Trump since early last week could include negative fallout from the re-emergence of a controversy over her use of a private email server, instead of a government one, when she was US secretary of state.

An average of polls compiled by the RealClearPolitics website showed Mrs Clinton just 1.7 percent ahead of Mr Trump nationally on Wednesday, with 47 percent support to his 45.3 percent.

Mrs Clinton's position is stronger than national polls imply, given that the race is decided by the Electoral College system of tallying wins from the states. Some 270 electoral votes are needed to win and Democrats have a built-in advantage, with large states such as California and New York traditionally voting Democratic.

Mrs Clinton looked likely to win at least 226 electoral votes, leaving her needing 44 votes to pick up from the 132 votes at stake in 'toss-up' states such as Florida, North Carolina, Virginia, Ohio, Iowa, Arizona, Colorado and Nevada, according to estimates by RealClearPolitics.

Mr Trump, on the other hand, has a steeper path to climb, looking likely to win 180 electoral votes and so needing 90 of the 132 votes from the current battleground states, the website showed.

Both candidates were focusing their final campaign efforts on those crucial states. 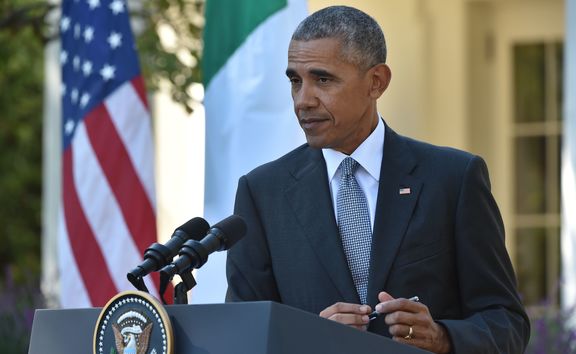 Mr Obama said US investigations should not operate on the basis of "innuendo" or "incomplete information".

The FBI is now investigating new emails that may be linked to its probe into Mrs Clinton's private email server.

Mr Comey has faced a fierce backlash for announcing the move just 11 days before the presidential election.

Mr Obama's remarks are his first public comments since Mr Comey's announcement on Friday that the FBI had discovered a new batch of emails that may or may not be relevant to an earlier, closed investigation into Democratic presidential candidate Mrs Clinton's handling of classified information.

"I've made a very deliberate effort to make sure that I don't look like I'm meddling," Mr Obama said in an interview with website NowThisNew.

It emerged in March 2015 that Mrs Clinton had been breaking federal rules by operating a private email server while she was secretary of state between 2009 and 2013.

Her lawyers combed through the server and provided the state department with 30,000 work-related emails, but her campaign deleted another 33,000 messages, saying they were personal in nature.

Mr Comey concluded in July that Mrs Clinton had been "extremely careless" in handling classified information, but there were no grounds for any charges.

The latest emails were found in a separate investigation into allegations that former congressman Anthony Weiner sent illicit text messages to a 15-year-old girl in North Carolina. Mr Weiner is married to one of Mrs Clinton's closest aides, Huma Abedin.

The FBI has reportedly obtained a warrant to search the cache of emails belonging to Ms Abedin, which are believed to have been found on her estranged husband's laptop.

There are reportedly 650,000 emails to search through on the laptop, but it is unclear who sent or received the emails or what they were about.

Mr Comey and Attorney-General Loretta Lynch have said they are working quickly to sift through the newly discovered emails.

Democrats have angrily demanded that the embattled Mr Comey rapidly make public what the agency knows about the new email trove.

On Sunday, the Democratic leader in the US Senate Harry Reid accused Mr Comey of violating an act which bars officials from influencing an election by revealing the bureau was investigating emails possibly linked to Mrs Clinton.