Donald Trump has won the race to the White House in a boilover after a dramatic day at the polls.

The controversial Republican candidate beat Democrat rival Hillary Clinton to become the 45th US president after a long and tumultuous campaign.

A handful of key swing states, including Florida, Ohio and North Carolina, cleared the way for his Brexit-style victory, which followed months of polling favouring Mrs Clinton.

While votes were still being counted, he had won enough electoral college votes to put him over the 270 out of 538 needed to secure a win, according to projections.

How did it happen? Review RNZ's live online coverage of election day here

At his victory rally in New York, Mr Trump thanked supporters, who chanted "USA, USA", before starting his speech:

"I've just received a call from Secretary Clinton. She congratulated us - it's about us - on our victory ... I congratulated her and her family on a very very hard-fought campaign.

"Hillary has worked very long and very hard… we owe her a major debt of gratitude for her service to our country. I mean that very sincerely."

Mr Trump said it was "time for us to come together as one united people".

"I pledge to every citizen, that I will be president for all Americans." 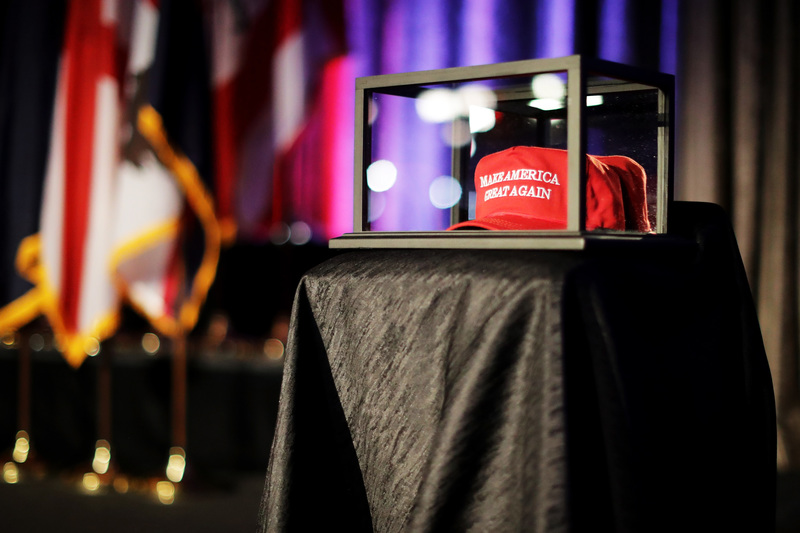 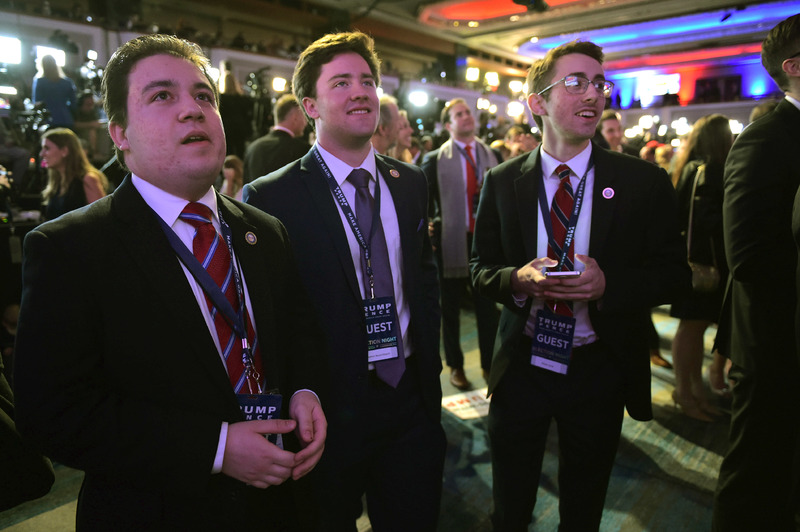 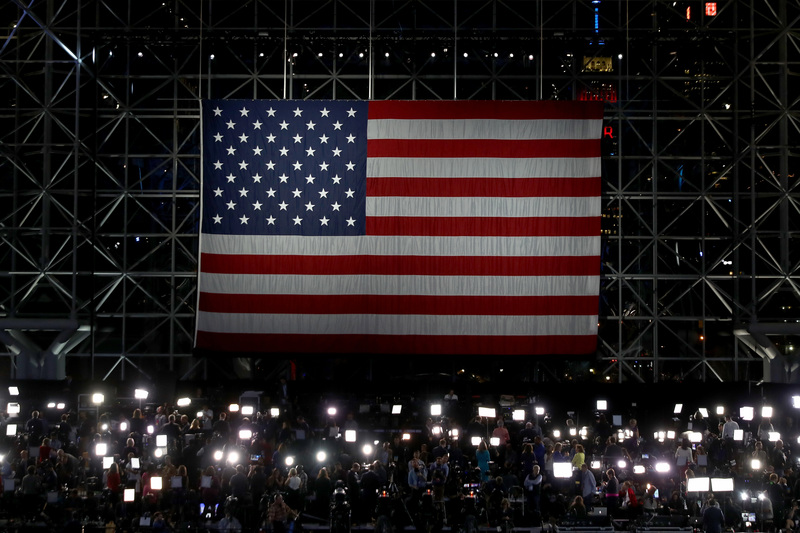 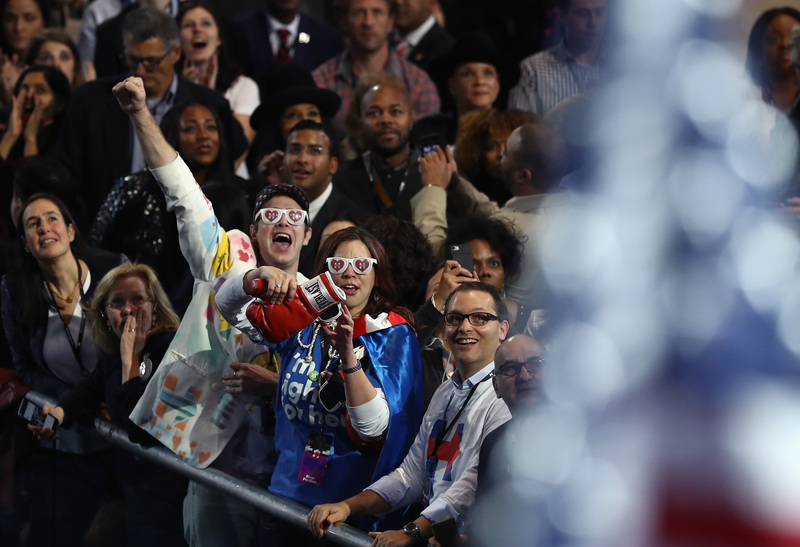 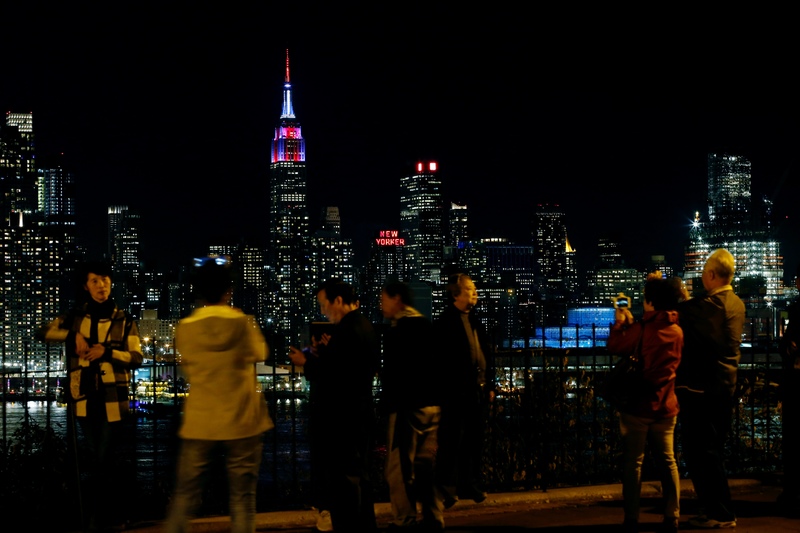 People take a look on the Empires State Building as it is seen lit in Blue, Red and White colors before the closing polls during the presidential election on November 8, 2016. in Weehawken, New Jersey. AFP 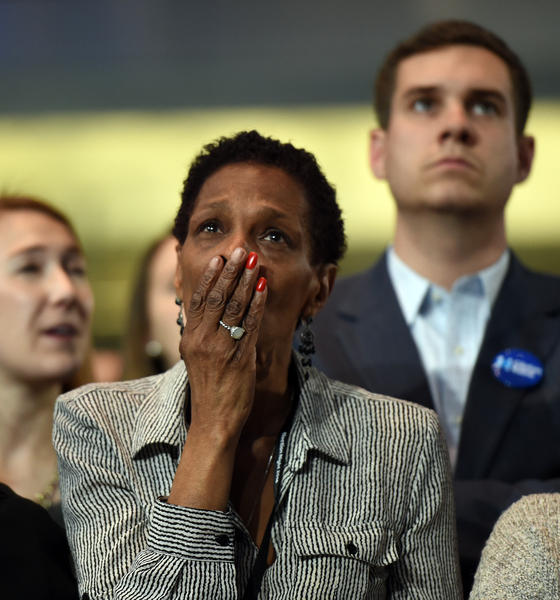 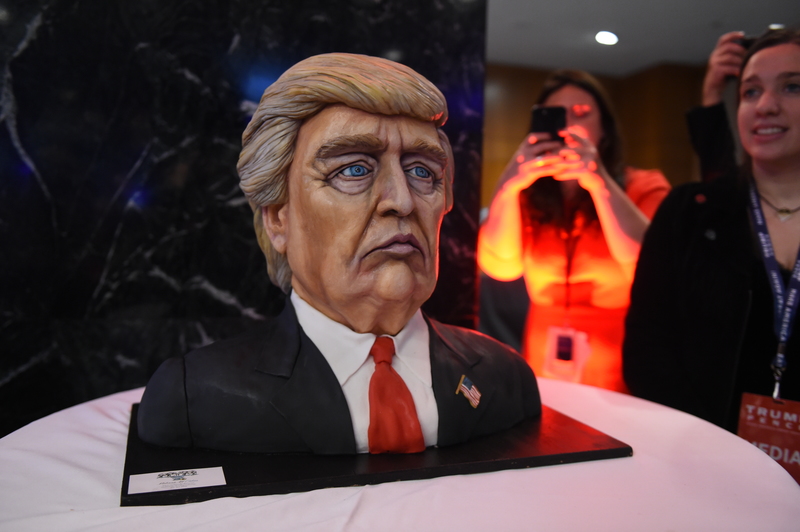 A cake in the likeness of Republican presidential nominee Donald Trump is on display at his election night event at the New York Hilton Midtown in New York on November 8, 2016. AFP PHOTO / Timothy A. CLARY 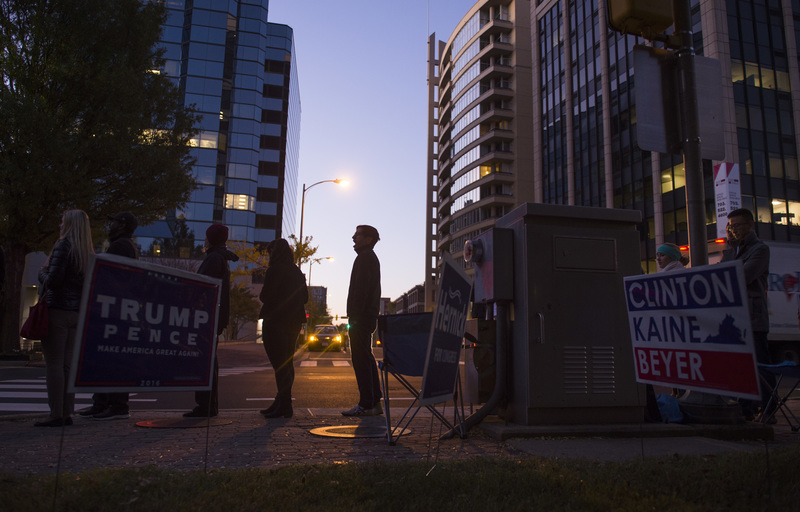 People wait in line to vote at a poll station in Arlington, Virginia on November 8, 2016. AFP / Andrew CABALLERO-REYNOLDS 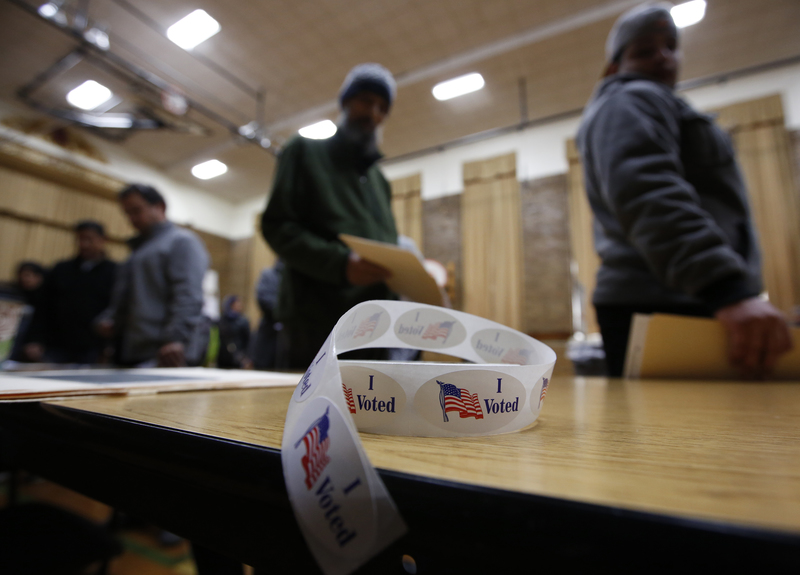 A roll of I Voted stickers sits on a table at Oakman Elementary School during the US presidential election on November 8, 2016 in Dearborn, Michigan. AFP / JEFF KOWALSKY 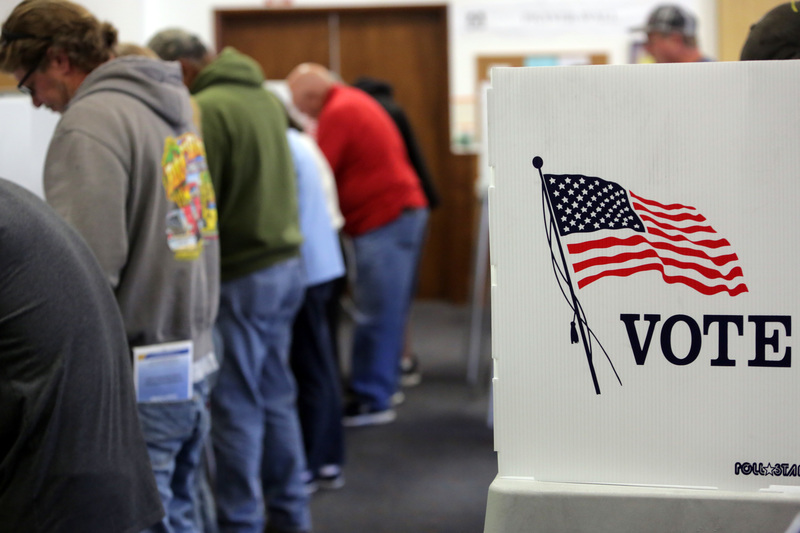 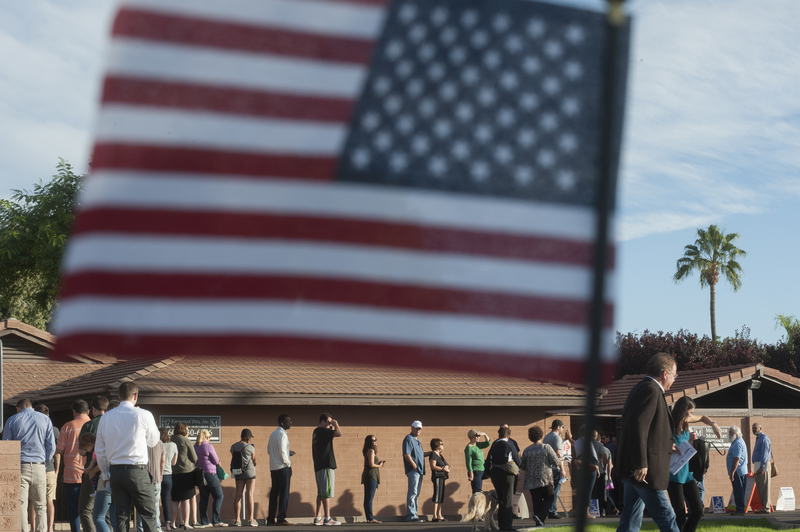 Voters wait in line in front of a polling station to cast their ballots in the US presidential election in Scottsdale, Arizona on November 8, 2016. AFP / Laura SEGALL 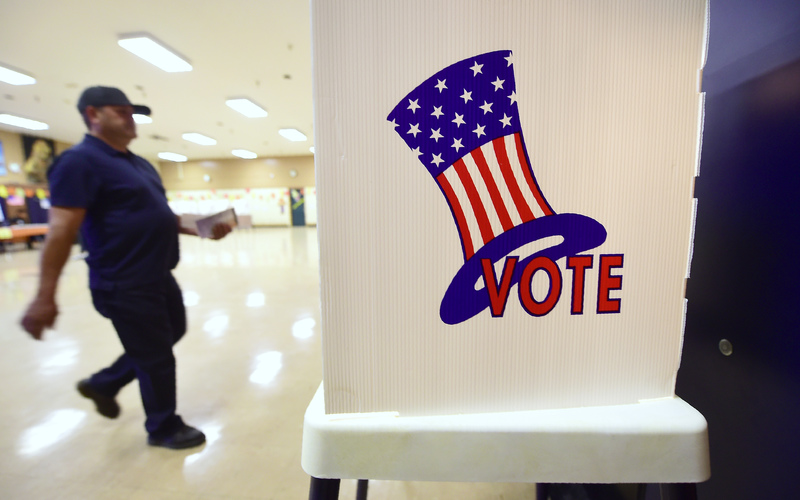 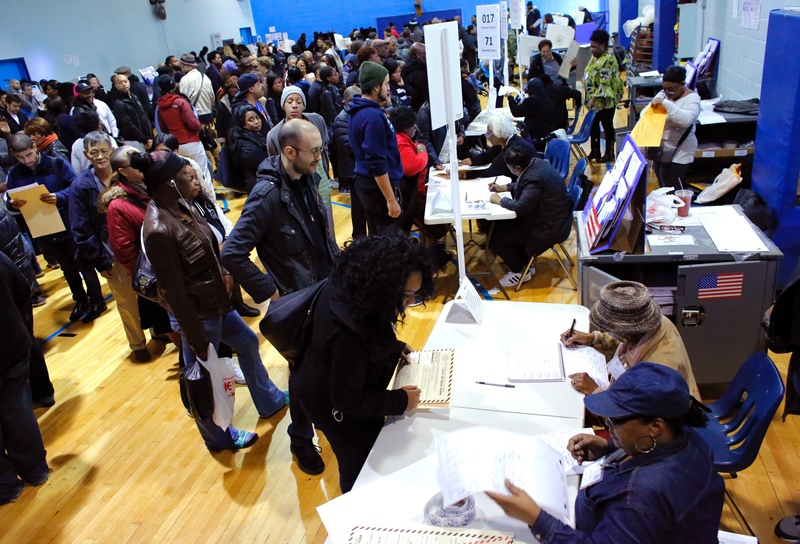 People wait in line cast their vote at Samuels Community Center as New York voters turn out to vote in the presidential election November 8, 2016 in Harlem, New York City. AFP 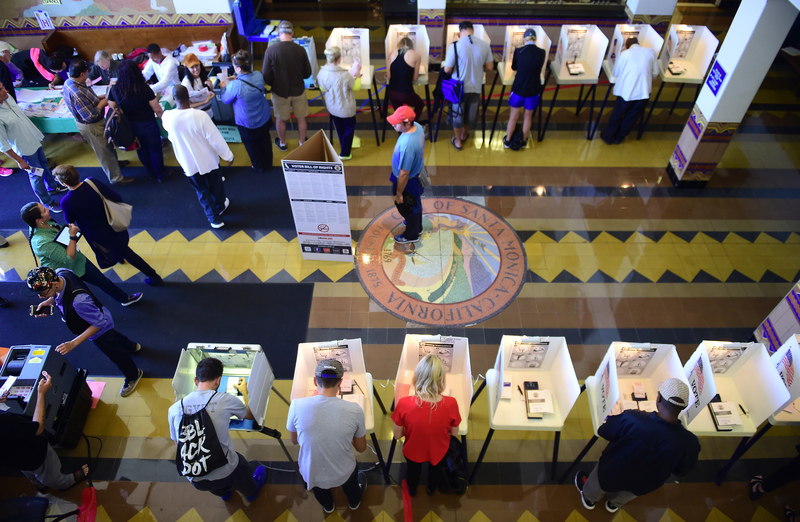 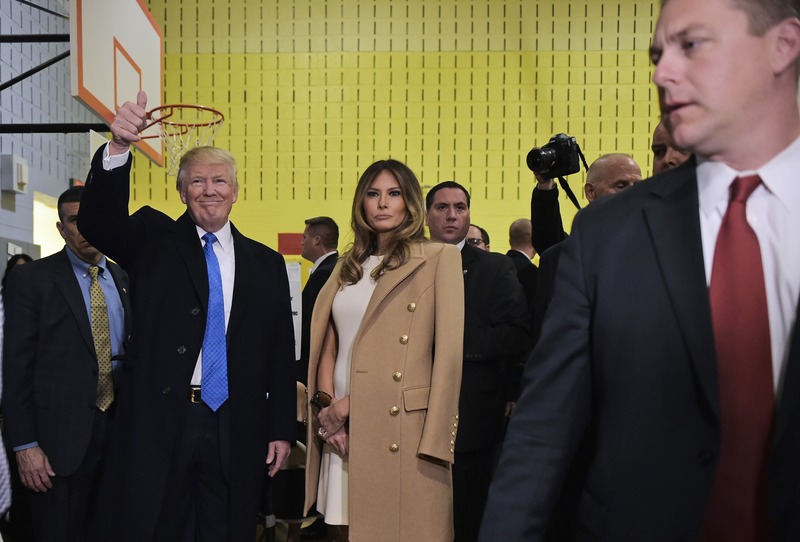 Republican presidential nominee Donald Trump gives the thumbs-up after he and his wife Melania (R) submitted their ballots at a polling station in a school during the 2016 presidential elections on November 8, 2016 in New York. / AFP PHOTO / MANDEL NGAN 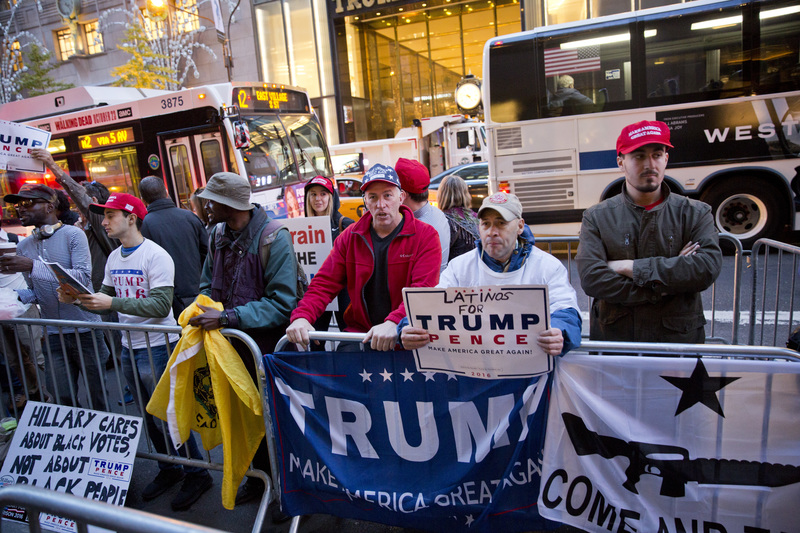 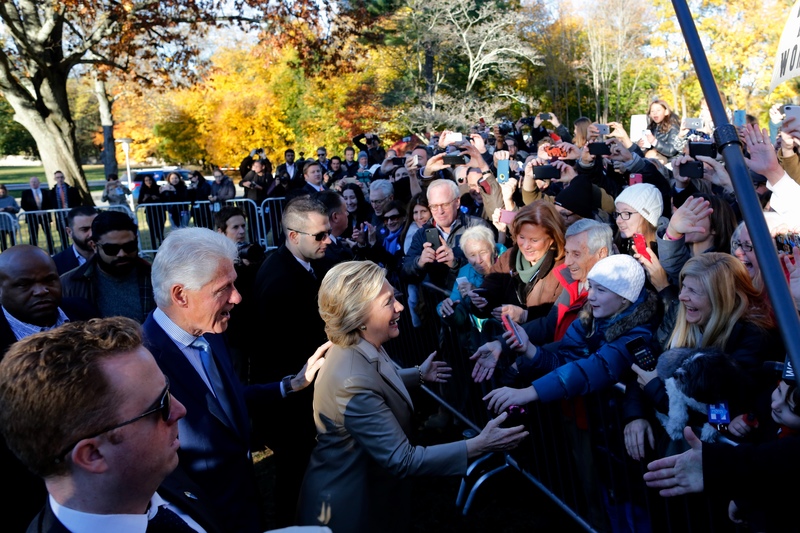 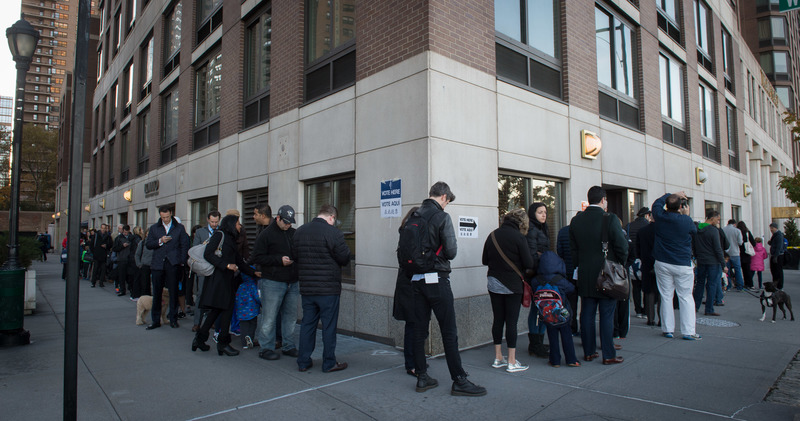 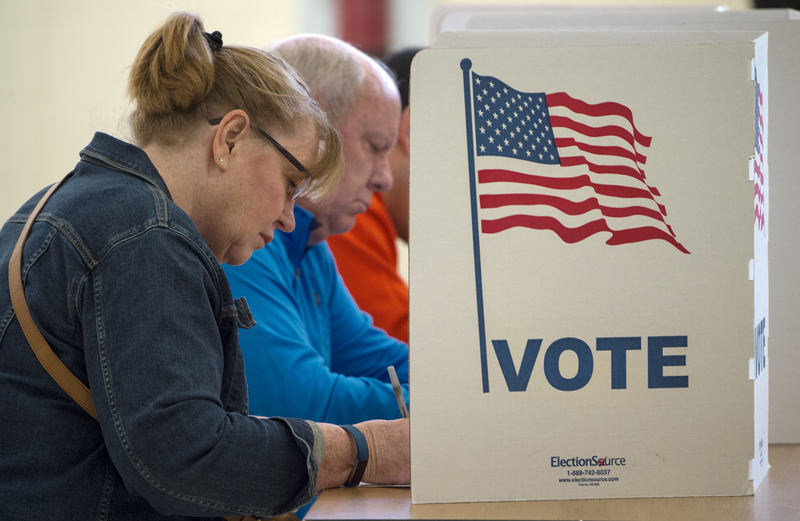 He asked for his opponents to help him "unify our great country".

"Ours was not a campaign, but rather an incredible and great movement, made up of millions of hard working men and women who love their country and want a better brighter future."

He went on to say the US needed to reclaim its destiny: "America will no longer settle for anything less than the best."

He said US interests would come first but, under his leadership, the US would deal with other nations "fairly".

Mr Trump thanked his family for their support. "We're going to get to work immediately for the American people," he said. "It's my honour ... I love this country."

Mrs Clinton, who would have become the first female US president, did not show up for what was meant to be her victory rally across town in Manhattan.

Democrats were also unable to wrest control of the Senate from Republicans, who retained their majority in both chambers of Congress.

Mrs Clinton clawed back some ground, winning Nevada, but it was not enough.

Mr Trump claimed victory in Pennsylvania and, leading in Michigan and Wisconsin, victory was his.

Earlier in the night, as the results looked set to go Mr Trump's way, the Clinton camp was dumbfounded, with some supporters crying.

Before the last votes were counted, US media commentators called Mr Trump's success a "rebellion against the elites" and a "whitelash against a black president". Some said immigrant families would go to bed in fear. Others called him a bully and a bigot.

Mr Trump ran a divisive campaign. He created fractions within the Republican party. His policies included building a wall on the Mexico border, a 45 percent tariff on Chinese imports and deporting 11 million undocumented immigrants. Violence marred some of his campaign rallies, which Mr Trump failed to condemn. He had favoured a "stay unpredictable" foreign policy.

He made several claims that the election was rigged, suggesting he would not accept its outcome if he did not win.

The billionaire celebrity's pundit-defying victory was expected to have an immediate impact on markets around the world.

The markets soured as Mr Trump's lead became apparent, with the Mexican peso crashing to a record low against the greenback.

The New Zealand Institute of Economic Research (NZIER) earlier described a win for him as "horrible" for New Zealand's economy.

Stocks fell throughout Asia with the Nikkei in Japan closing down 5.36 percent, Australia down 1.92 percent and Hong Kong nearly 3 percent down.

Wall Street was picked to have one of its biggest falls with futures pointing to a 800-point drop - more than 5 percent - when it opens on Wednesday.