Standing Room Only for Sunday 27 September 2015

New York Choreographer Leslie Scott is collaborating with Christchurch dancers on a project about decaying and demolished buildings and rebullding. Christchurch offers many options in all three categories. (re)BUILD as a collaboration with the Christchurch Arts Centre and Hagley Dance Company and opens at the Centre this Friday as part of the Body Dance Festival.

12:48 A different perspective on the Garden City

Large banners with images of cabbage trees, daffodils and even weeks have been handmade for the SCAPE outdoor art biennial. Ōtākaro Plant Parade is a new artwork by Fiona Jack which has been developed for SCAPE 8 New Intimacies, Christchurch's biennial outdoor art event. Over the past year Fiona has spent time in Christchurch, talking with locals and learning about ecological stories and histories of the Garden City. Her work celebrates and responds to these gathered narratives: from the historic trees planted by Samuel Barker along Oxford Terrace, to the daffodils which appear every year through the efforts of the Christchurch Beautifying Association; from the cabbage trees at Burnside High School to the self-seeding weeds that occupy the city's vacant lots. Next Sunday morning banners will form a procession the path of the Ōtākaro-Avon River.

1:34 Finding a choral niche in the capital

It's a brave choir that takes on the music of seminal musicians like David Bowie and Fleetwood Mac. You have to please people who know and love every note of the original version, yet put your own stamp on it.One of Wellington's newest choirs Supertonic whose singers are in the 20s to 30s age group, is taking on the challenge. While it's only been going since early last year, Supertonic's put on several concerts and been recorded by the sound wizards at Park Road Post. Founding member Evie Rainey and Supertonic's Music Director Isaac Stone explain why they started a new choir rather than join one of the many existing ones in the Capital. The choir's next concert 'Fighting in the Dancehall' is on Saturday 3 October at The Hunter Lounge in Wellington.

New Zealand doesn't have a long history of puppeteering compared to other parts of the world where puppets still continue to serve as storytellers, reinforcing cultural traditions and bringing myths and legends to life. Sonia Sly went to meet some puppeteers to find out how they're keeping the world of puppetry alive in New Zealand ahead of Out of the Suitcase Puppet festival in Wellington. 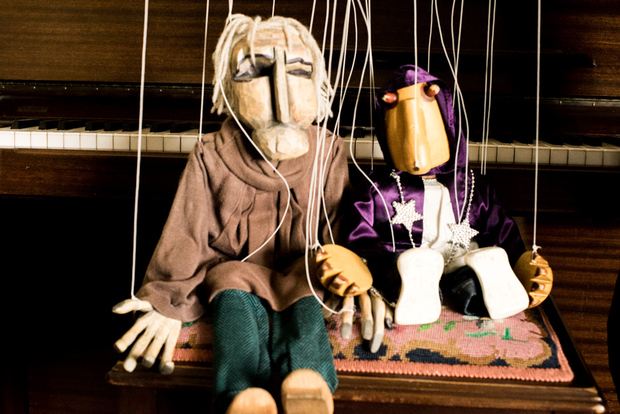 Musician Gerry Paul is a man of many parts - he's a songwriter, a TV presenter, a producer and the creator of "Hank the Wrestling Shark" opened many doors for him after winning the 2010 Grand Prize at the international John Lennon Songwriting Contest. Gerry's spent a big chunk of his life touring overseas with some big name acts and a variety of bands. He's about to perform at several New Zealand venues, including at the Tauranga Arts Festival in collaboration with Trinity Roots in a show called Motu-Oileain, and also with singer/songwriter Mel Parsons. He shares some of his favourite comedians including Brendan Grace, Ricky Gervais and Billy T James, and New Zealand TV show Seven Periods with Mr Gormsby.

Zahra Killeen-Chance is an award winning choreographer and dancer, whose choreographed work has been produced in Auckland, Wellington, Dunedin and Taipei. Currently Zahra is studying for a masters in Performance and Media at AUT. Her upcoming work The Fallen Mystery, is inspired by 1940s-1950s Film Noir film style, where elements of these films are explored through dance. It started as a 10 minute piece performed at Auckland's Tempo Dance Festival in 2014 and returns to Tempo this year as a full length work. The Fallen Mystery is non-linear and characterised by short tableaus full of imagery. Adding to the show Hermione Johnson will perform live music alongside the dancers.

It was one of New Zealand's most shocking and most reported murders back in the late 19th century. Most of us have never heard of Mary Dobie, a young artist killed while out walking on in Opunake. But in the 1880s the newspapers and their readers just couldn't get enough of the murder mystery. Writer and Journalist David Hastings has researched Mary's story, which is remarkable in its own right, for his book, The Many Deaths of Mary Dobie. It is published by Auckland University Press.

David Hastings' career in journalism spans more than four decades. He began working as a copy boy on the Melbourne Sun in 1970 and ended in 2013 as editor of the Weekend Herald. In between times he worked for Australian Associated Press, the Australasian Express in London, the ABC in Melbourne as sub-editor, producer and then television news editor. At the New Zealand Herald between 1987 and 2013 he was a sub-editor, foreign editor, news editor, deputy editor and, finally, editor of the Weekend Herald. He left the Herald in January 2013 to pursue his interest in writing history. 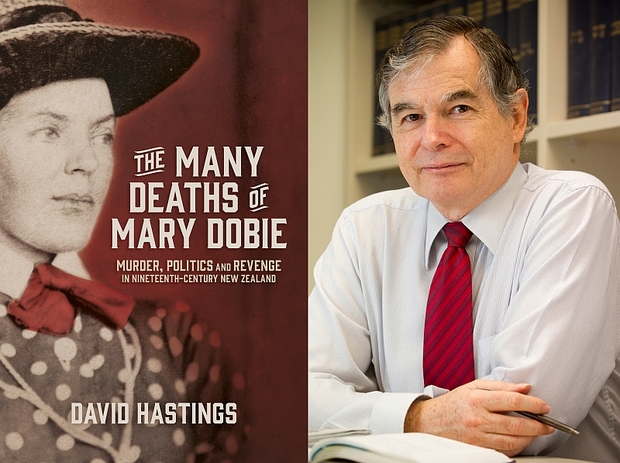 Mike Gourley checks out this year's IHC Art Awards and talks with national judges, Boh Runga and Dylan Horrocks. He also interviews the event organiser Penny Harding - about the winning work, and IHC National Communications manager, Gina Rogers, about the glossy and stylish booklet she edited, marking a decade of the Awards from their beginnings in 2004 through to last year. The sponsorship has now been taken up by the Holdsworth Family Trust. Auckland artist Chris Wills won the IHC Art Awards 2015 and $5000 with an intricate map of New Zealand embroidered on linen, while teenage Gisborne artist Keitha Taylor is this year's People's Choice winner. She entered a pen and watercolour pencil drawing Baby and Mother Giraffe. 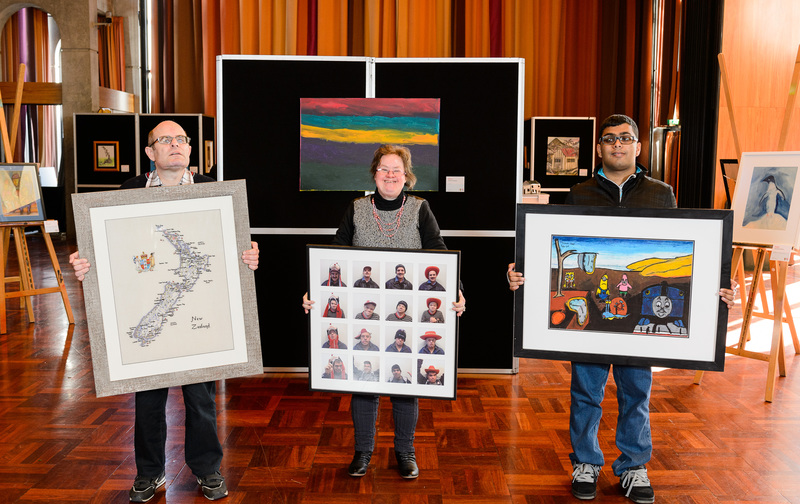 All three winners from the IHC Art awards. From left: Chris Wills with New Zealand; Best Friends with Sheryl McIlroy. Dharmesh Chand with A Train Station for Me and My Friends. 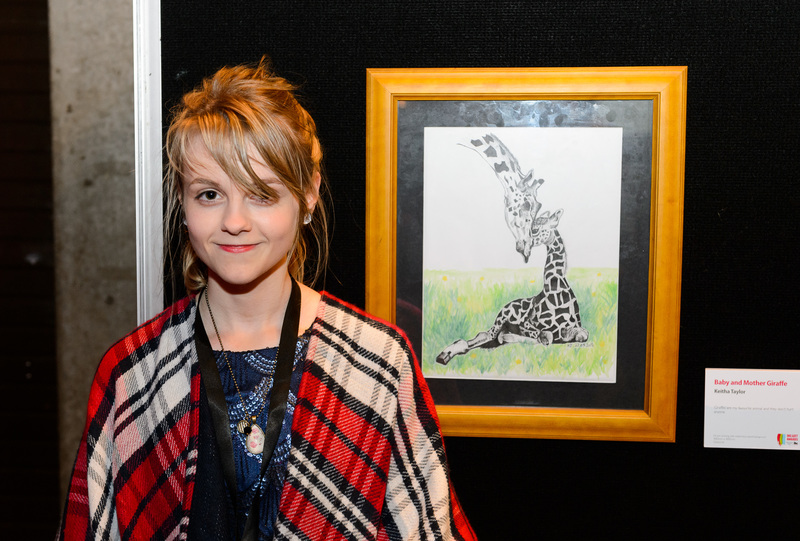 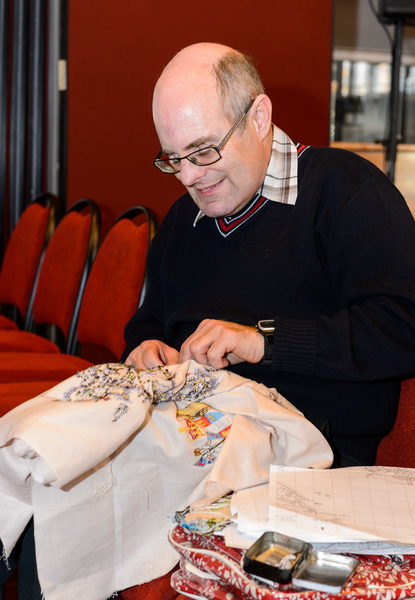 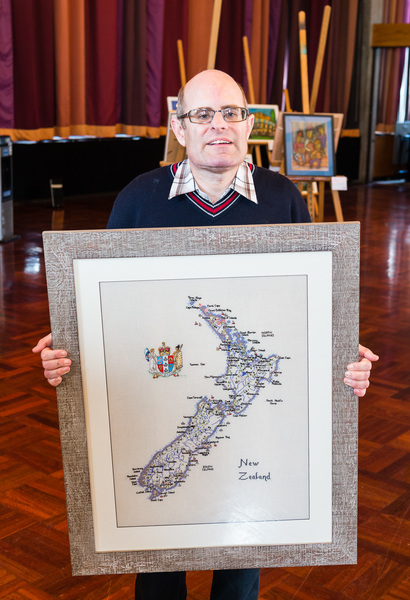 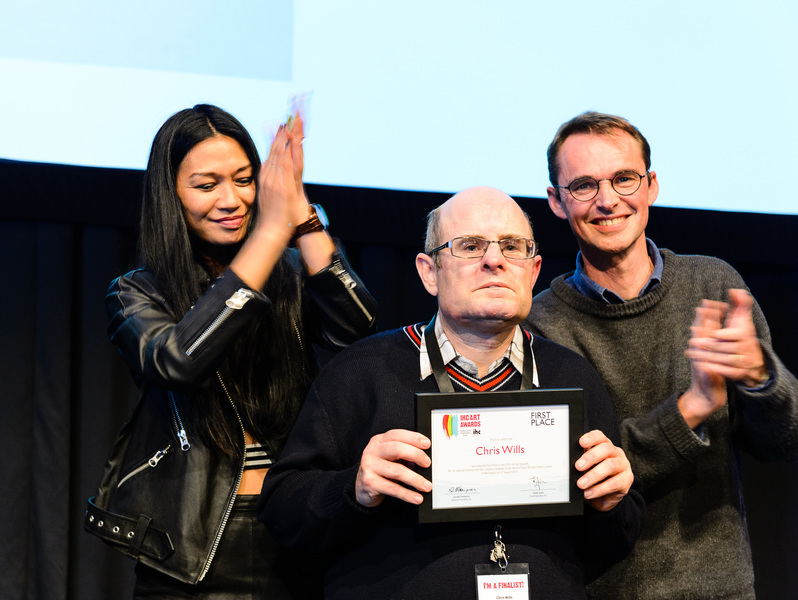 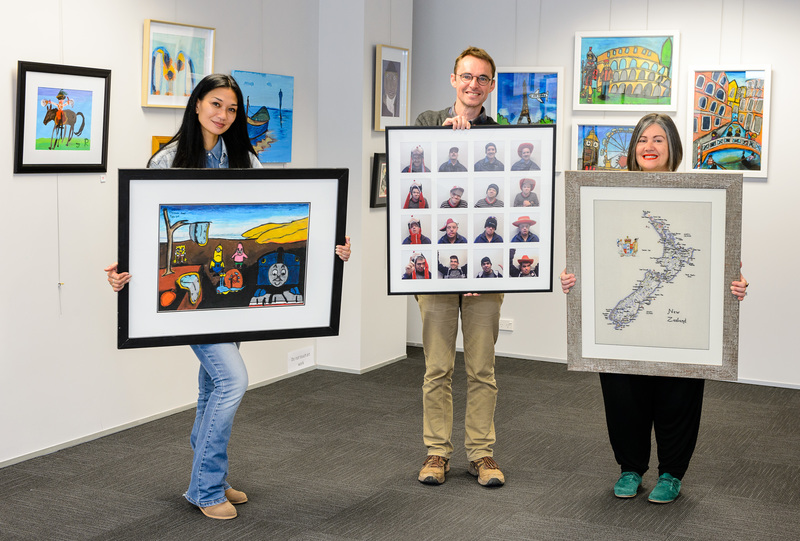