Dr Josh Davis is a Reader for Psychology in the Department of Psychology, Social Work and Counselling at the University of Greenwich. His PhD was on “Forensic Identification of Unfamiliar Faces in CCTV Images” (2007) and he has published research on human face recognition and eyewitness identification, most recently on the abilities of “super recognisers”. He works closely with London's Metropolitan Police Service on the deployment of officers possessing super-recognition ability.

Dr Vincent Covello is the founder and director of the Center for Risk Communication in New York. He has worked as a researcher, teacher and consultant advising over 500 government agencies on high-concern risk and crisis situations, including Ebola, the Fukushima meltdown, the water contamination crisis in Flint, Michigan, and the recent Zika virus outbreak in South America. He is visiting Wellington to speak at the HASANZ Conference 2016 (8 September). 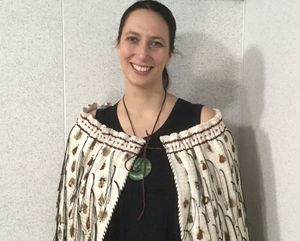 Jacinta Ruru, wearing “Rauaroha”, the korowai that is presented every year to the winner of the Supreme Award at the Ako Aotearoa National Tertiary Teaching Excellence Awards. Photo: Mark Cubey

Professor Jacinta Ruru (Raukawa) has been the only Māori Law Faculty staff member at the University of Otago since 1999. She has designed a new experience of learning law that brings into the classroom Māori experiences of the law, Māori relationships with land, and Māori challenges for change. This week she won the Prime Minister’s Supreme Award, and a Sustained Excellence Award in the Kaupapa Maori category, at the National Tertiary Teaching Excellence Awards run by Ako Aotearoa. 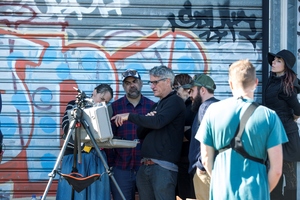 Ryan Griffen (with green cap) on the set of Cleverman. Photo: supplied

Indigenous Australian director Ryan Griffen is the creator of the television series Cleverman, a futuristic drama with roots in Aboriginal mythology co-produced by Goalpost Pictures Australia and New Zealand’s Pukeko Pictures (Thunderbirds). Double episodes will screen weekly from Wednesday 31 August on the DUKE channel, and the series is available for viewing now at TVNZ OnDemand.

David Lawrence is director of The Bacchanals, a Wellington theatre company he founded in 2000 to explore text-based theatre and redefine classic works, and research and development consultant for the Popup Globe. He will discuss the Shakespeare play The Winter’s Tale, described alternately as a comedy, late romance, or “problem play”. 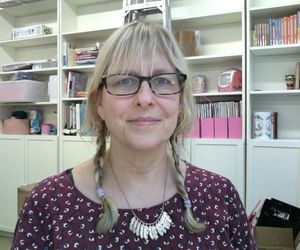 Debbie Stoller is the co-founder, co-publisher and editor-in-chief of BUST magazine in New York, and co-edited The BUST Guide to the New Girl Order and The BUST DIY Guide to Life. In 1999, she formed a Stitch 'n Bitch group to teach and encourage others to knit, which led to the 2003 bestseller, Stitch ’n Bitch: The Knitter’s Handbook, and four more Stitch ’n Bitch titles. She is a guest at the WORD Christchurch Writers & Readers Festival 2016, speaking at two sessions (27 and 28 August).