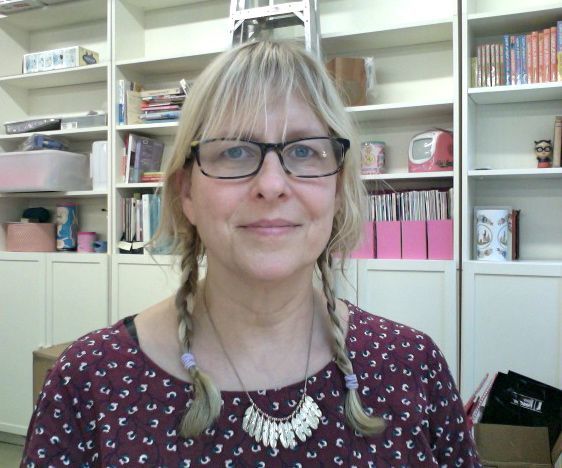 Debbie Stoller is the co-founder, co-publisher and editor-in-chief of BUST magazine in New York, and co-edited The BUST Guide to the New Girl Order and The BUST DIY Guide to Life.

She is a guest at the WORD Christchurch Writers & Readers Festival 2016, speaking at two sessions (27 and 28 August).

I don’t know if you would describe yourself as a third-wave feminist, but you are described as such. I wondered, how would you define that? What would that actually mean?

Third-wave feminism started up in the late ‘80s, early ‘90s and feminism was just becoming popular again among women after ‘70s feminism becoming a little quieter, but really for me it was just some different strategies than what was taken by the second-wave, which was a ‘60s and ‘70s feminist movement. Not against those strategies, just a different emphasis, but all towards the same goal, which was to achieve equality between the sexes in the world.

1970’s wanted to reject a lot of things, they wanted a lot of words to no longer be used in relation to women, and they had a lot of focus on the political. That strategy actually came out of the civil rights movement, which was happening at the same time.

I think that third-wave feminism actually got a lot of ideas from the queer rights movement that was setting up during the AIDS crisis and that had different strategies that were more about reclaiming, rather than saying, ‘Don’t call me this word’, you can actually flip the meaning of certain words and own them and make it so that, rather than forcing people to not say things, they can’t say them with the same meaning, because you’ve changed the meaning.

Also, I think a much bigger focus on the importance of pop culture as a place that determines what women’s position is in the world, what they think their opportunities are and so on. I firmly believe that pop culture, especially in America where we don’t really have any other kind of culture, we don’t really have the history, it’s not like certain places in Europe where they have something else that binds the people together, and I think that really pop culture has a lot of power to change people’s beliefs and their values. Once those values change, then you can change things in the law.

I don’t know! But I do know that the women who intern with us, and when I see the stuff that the younger women write about, I think they are less about reclaiming in certain ways. There is more of an emphasis on using language correctly. There is definitely a lot of advancement in more inclusive feminism that looks across race and class as much as it does across genders and also issues of transgender are very important to this generation. Those are issues that have always been important, but there is a real focus on it, so I have long thought that those are the issues that will really shape the fourth-wave of feminism.

In a recent edition of Bust, you editorialised that feminism has gotten cool lately and everyone was embracing it and you wrote, “Speaking as one who has tracked the rise and fall of the F word for a few decades, a backlash must be imminent.” Where is the backlash coming from? Can you see it coming over the hill?

I don’t know. Not yet. I don’t think it has happened quite yet, but I know it’s going to happen. Part of it is finding its place in the kind of misogynistic hatred that can be thrown towards Hilary Clinton and when Trump talks about being tired of being PC what he really means is he’s tired of being inclusive and not being sexist and not being racist. So, the fact that there are all of these people who support him who think that these are things that people should embrace and feel completely comfortable saying out in public about women and people of other religions and other races is definitely a blow-back to the kind of progress these groups have made in America. It is like white man’s last stand, or something.

If there is always going to be a backlash, does that mean that the need for feminism will never end, because the norm is misogyny?

I hope not, no. I think that it will be possible to get to where we need to go, but we are working against centuries and centuries of traditions that have worked towards one group’s advantage and the other group’s disadvantage. That is not an easy thing to change. It is a very, very complicated issue and people can’t even quite agree about how that should change, which I think is fine.

I think that is culture experiencing all sorts of growing pains and figuring out how to advance, but it’s always two steps forward and one step back. You get there, but you get there slowly and people become more and more aware.

I was doing some research for one of the presentations that I am going to be giving at the festival in Christchurch and I was looking at things that people used to say about women in the 1910’s and the late 1800’s when women were starting to fight for their rights and suffrage. You wouldn’t believe how many editorials and cartoons were about, ‘These women hate men and they’re ugly and they scream’. The same kind of blow-back that women got in the ‘60s and 70s, which was of course nonsense then and nonsense now, but somehow that becomes popularised.

I guess certain people are unwilling to educate themselves about stuff, so with my generation if you mentioned feminism to them, a lot of them would say, ‘Well, I don’t hate men’. They’re afraid to call themselves feminists because they thought that men wouldn’t think they’re sexy or something. Luckily the new generation, these millennials that everybody wants to talk about, are much more willing to call themselves feminists, so maybe they’re more media literate than woman of my generation.