Penny Eckert is a professor in the Department of Linguistics at Stanford University, and has been studying vocal fry, a guttural growl sound formed in the back of the throat that is prevalent at the end of words and sentences.
Photo: Linda Cicero 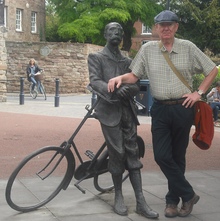 8:30 John Kirkhope: powers of the Sovereign

Dr John Kirkhope is a Notary Public, a visiting research fellow at Plymouth University, and author of the 2013 book An Introduction to the Laws of the Duchy of Cornwall, The Scilly Isles and Devon. He fought a freedom of information case to access papers showing the extent of the Queen and Prince Charles's secretive power of veto over laws in the UK.

Winston Cowie is a New Zealand author and award-winning environmental policy manager who works as the Section Manager of Marine Policy, Planning and Regulations at the Environment Agency in Abu Dhabi. His latest book, Conquistador Puzzle Trail (Northern Tuatara Pres), is a comprehensive assessment of possible pre-Tasman Portuguese and Spanish discovery voyages to Australia and New Zealand.

9:45 Andreas Elpidorou: the value of boredom

Andreas Elpidorou is an assistant professor in philosophy at the University of Louisville. His book Physicalism and the Spell of Consciousness will be published in 2016. He will discuss his article about the value of boredom, The Quiet Alarm, recently published in Aeon magazine.

Musician, singer, composer and music educator Julian Raphael is the director of Community Music Junction, an organisation which enables people to sing together and learn a range of musical instruments. He is  founding musical director of the Wellington Community Choir who are presenting their anniversary event, Celebrating 10 Years of Singing People Together, on 29 August at the Michael Fowler Centre.

Australian writer Michael Robotham worked as a journalist in the United Kingdom, and as ghostwriter for fifteen high-profile politicians and celebrities, with twelve of his “autobiographies’ making the Sunday Times bestseller list. Since 2002 he has been a bestselling crime fiction writer, and his latest novel is Close Your Eyes (Sphere). He is visiting New Zealand for public events in Auckland, Wellington, Nelson and Christchurch (24-28 August).

New Zealand writer Kate De Goldi is the author of many books. Her new novel for children, From the Cutting Room of Barney Kettle (Longacre) will be published in September. Kate will discuss a picture book, a 'middle-school' novel, and a YA graphic memoir:
When Dad Showed Me the Universe by Ulf Stark, illustrated by Eva Erksson (Gecko Press);
Three Times Lucky by Sheila Turnage (Penguin Books); and
Honor Girl by Maggie Thrash (Candlewick Press).