Australian author and filmmaker Damon Gameau went in front of the camera to explore the impact of a 40-teaspoon daily diet of sugar, eating only food presented as healthy. He documents the results in That Sugar Book (Macmillan) and That Sugar Film, which has its New Zealand premiere during the 2015 NZIFF Autumn Events programme in Auckland (16-19 April), Wellington (17-18 April), Dunedin (17-20 April), and Christchurch (2 May). (The SugarScience resource site is mentioned during the interview.)

Bronwyn Hayward is Associate Professor of politics and heads the Department of Political Science at the University of Canterbury. From January 2016, she will lead one of nine research teams on five-year international research programmes for the new international Centre for the Understanding of Sustainable Prosperity (CUSP), directed by Prof Tim Jackson, Surrey University. The CUSP centre is funded by a $12m grant from the British Economic and Social Research Council.

Levi Armstrong is the founder of whanau-based gym Patu Aotearoa, and is working with Jackson Waerea, and Kia Diamond to bring group fitness and wellbeing to communities that struggle with obesity and other health-related issues. They have two gym sites, in Hastings and Wairoa, and have developed a home and office gym app. Patu Aotearoa was one of 11 businesses selected to participate in Contact Launchpad, the Akina Foundation's social enterprise accelerator programme, and won the People’s Choice Award of $20,000 earlier this week. 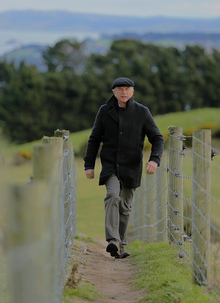 Sam Neill is an actor, and vigneron at Two Paddocks winery in Central Otago. He was most recently seen on New Zealand television screens in the BBC series, Peaky Blinders, and is the executive producer and presenter of the documentary, Anzac: Tides of Blood, which explores his family’s experience with war and the legacy of Anzac on both sides of the Tasman. It will premiere on Maori Television on Anzac Day (25 April, 7am and 8pm), and be available on demand for 14 days after transmission. A Radio New Zealand series, The Godley Letters, features Sam Neill and Ginette McDonald reading the letters between Major General Alexander Godley and his wife Louisa at the time of Gallipoli. The ten-part series will be broadcast on Nine to Noon from 13 April.

11:05 Mike McWilliams: science past and future

Mike McWilliams is the chief executive of GNS Science, which this week marked the 150th anniversary of its ancestor, the Geological Survey, the first New Zealand Government science entity, set up by James Hector in Dunedin.

Dr. Lynsey Hayward is an Auckland gynecologist, and Vice President (and incoming President) of the International Urogynecological Association.