The political economy of Covid-19 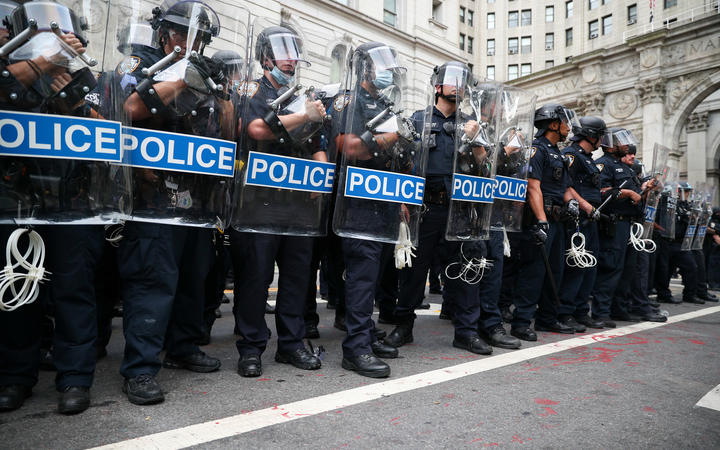 Otago University Associate Professor Bryan Roper says big business interests are pushing for austerity measures similar to those imposed after the global financial crisis in 2008, which would decimate public services and hit the most vulnerable in society the hardest.

Roper, who has co-edited The Political Economy of New Zealand and is the author of The History of Democracy, says people simply won't accept that this time.

He tells Nights that, although the current economic crisis has been brought about by circumstances different to those that threatened the collapse of the financial system in 2008, fiscal measures to save the economy are following a similar trajectory.

“The sequencing of the crisis has been quite different in that respect in terms of how it’s played out, at the least in the initial stages.

“But nonetheless, what we’re seeing with the fiscal stimulus is obviously a huge increase in government debt… and business is going to be lobbying very hard that the poor and middling folks pay through a sustained campaign of fiscal austerity, so that there are sweeping cuts to public provision of health, housing, education, superannuation, provision for old age.

“This is going to contribute to another wave of social and political unrest because I don’t think people are going to sit back and take it.”

After the 2008 sub-prime mortgage scandal sent ripples across the global financial world, governments across the world bailed out banks as they considered these underpinning institutions ‘too big to fail”.

The UK government alone initially launched a bank rescue package totalling £500 billion on 8 October 2008. The Wall Street bail-out in the US is thought to be much higher than the $US700 billion figure given at the time by the Treasury Department, as payouts continued.

The ensuing years brought economic misery for millions as public spending was reduced and social provisions for those struggling in society were severely cut. Public resentment at political elites who they saw as protecting corporate interests while austerity measures further destroyed the fabric of society, spilled over electorally, with populist demagogues voted into power.

Roper says, although the Far Right’s rise is a concern, he believes intersecting social justice movements are forming more of a critical mass, as increasing sections of society face the brunt of a failing free market model.

“The Far Right are going into this crisis in far better shape than it did with the 2008 financial crisis,” he says.

“But then if we look at the Black Lives Matter movement, I still think that the rise of movements on the Left are likely to be much larger… If you look at who is going to suffer in the most severe economic crisis since the 1930s, it’s going to impact on young people, Maori and Pasifika, workers in hospitality and areas related to tourism, blue-collar working-class people who have less secure employment than white-collar professionals. It’s going to substantially increase a broad range of class, gender and ethnic inequalities within society, as well as young people.”

Roper rejects the idea that Covid-19 presented an “external shock” to commodity capitalism. He says the crisis has been internally generated and is a severe manifestation capitalism's contradiction - its characteristic boom-bust cycle. He says the lockdowns expose a persistent ideological mystification - the popular but false belief that free market economies are inherently self-adjusting and if left alone naturally produce efficiency and the best outcomes.

“If one looks at the responses to the pandemic lockdown and the economic crisis – the International Monetary Fund, the World Bank, the OECD and so forth, one can certainly agree with their assessment of the severity of the many economic implications of the crisis,” he says.

“What I would quarrel with and question is the depiction of the impact taking the form of an external shock, which is impacting spontaneously on the demand and supply sides of the economy.

“It’s impacting on the demand side of the economy obviously because lockdowns mean that people are spending less so there’s a dramatic and sudden decline on consumer demand and it’s impacting negatively on the supply side, because if you have workers staying at home then obviously the worlds of industry grind to a halt.

“Underpinning this is something that is absolutely central of the worldview of neo-classical economics, which is the idea that capitalist market economies are inherently self-adjusting entities that are always tending towards general equilibrium, full employment and resources, unless you have various institutional rigidities inhibiting and impeding price flexibility markets – you know, ‘nasty horrible things’ like trade unions and minimum wage legislation and so forth.

“One of the problems about viewing this as external shocks is that it’s a fantasy. This pandemic has not come from outside the capitalist economic system. It’s been generated from within it."

Two of the antecedents to the crisis had been industrial farming practises and unsustainable models of generating economic wealth, he says.

The pandemic was not unexpected and as far back as 1982 experts had warned that China would serve “as ground zero” for the next influenza pandemic and the conditions for this would get worse with a further liberalising of the economy, Roper says.

Scientists like Rob Wallace in his book Big Farms Make Big Flus contain criticisms of China from as far back as 2007 for creating conditions of an epidemiological disaster.

“The spread of Covid-19 is consistent with this broad analysis,” he says.

“It’s been generated, among other things, by the very loosely regulated, profit-proven and government supported and promoted wildlife farming industry in central and southern China and a range of other factors including a massive rural-urban migration in China as peasants have slotted into these special economic zones, which has brought animals that had previously been in remote habitats into close proximity to large human populations."

Tourism had also played a factor and the unsustainable and exploitative nature of this sector was now being exposed.

“In terms of the virus’ spread, a huge increase in international tourism between 2010 and 2019 took place. According to the World Tourist Organisation, which is affiliated to the UN, in 2010 952 million international travellers. By 2019 that had increased to 1.46 billion…”

“This is clearly environmentally unsustainable. Also, if you look at the cruise ship industry, run under flags of convenience, you have de-unionised vessels with inadequate protections for the workers on those ships…”

Although there could be a strong economic rebound if a vaccine was found for the virus, austerity measures would present a problem for governments, with public anger increasingly boiling over, Roper predicts.

In emerging industrial power houses like India and China - which are grappling with new social forces as more industrialised working-class populations form in cities - this popular discontent could be significantly amplified and become a structural challenge to power, he says.

“There are signs that they’re organising, particularly in China. One of the problems is, despite the false proclamations of China as being communist – keep in mind Marx defined communism as being a classless, stateless, self-governing society – clearly today China is neither classless or stateless, it is a nasty authoritarian dictatorship. It doesn’t allow workers to freely associate and to organise in free trade unions to defend their interests… We’re seeing a very intense, bureaucratic form of state capitalism in China, which I think has already generated resistance and will continue to generate resistance on a much larger scale going forward.”