The coronavirus has turned into the perfect storm for thousands of Marshall Islanders living in the United States. Since March, Marshallese have experienced extraordinary Covid-19 infection and death rates in many American states.

"The most vulnerable people in the United States in almost every state where there are large numbers of Pacific islanders, are Pacific islanders," said Marshall Islands Health Secretary Jack Niedenthal in Majuro.

"And of those Pacific islanders, Marshallese are the most vulnerable." 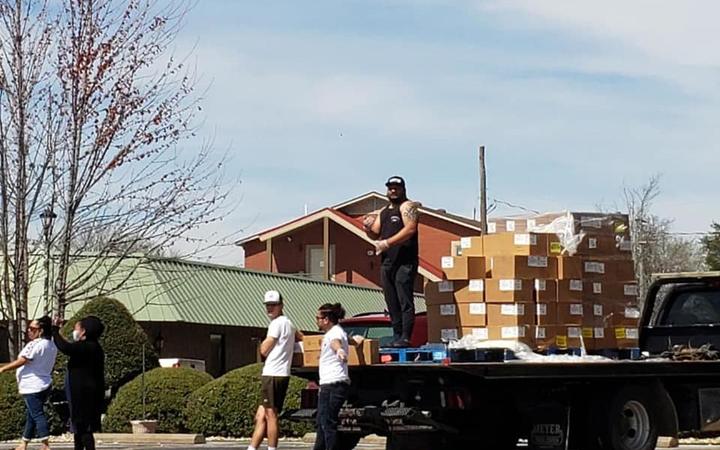 An exodus of Marshallese to the United States over the past three decades has seen many islanders benefit from jobs, education and healthcare opportunities not available at home.

A visa-free provision of the Compact of Free Association treaty with the United States opened the door to greener pastures and saw Marshallese flock to many parts of the United States, but particularly mid-western states where employment is plentiful in meat processing factories.

The benefits were many and the number of Marshall Islanders and from the two other freely associated states in the north Pacific migrating to the US skyrocketed after the treaty containing visa-free access was approved in 1986.

The spread of Covid-19 in the US abruptly changed life in America from a blessing to a curse for many Marshallese who are experiencing virus infection and death rates many times above the average in states in which they live.

In Northwest Arkansas, home to multiple meat processing plants that employ thousands of islanders and have been hard-hit by Covid-19, they account for half of the deaths in that area.

This is a confluence of chronic health problems, high-risk work locations, and cultural norms.

Over a quarter of all Marshallese adults have type 2 diabetes, the third highest country rate of the chronic illness globally.

The heavy diabetes affliction has resulted from changing lifestyle patterns of islanders who were once self-reliant on isolated islands but in the past several decades have moved to urban areas where diets based on white rice and processed meats coupled with little exercise have contributed to an epidemic of diabetes and other chronic illnesses.

Arkansas health authorities reported that 14 of the first 28 people to die of Covid-19 in Northwest Arkansas had type 2 diabetes - and 12 of them were Marshallese.

Not all US states include a "Pacific Islander" designation or a "Marshallese" box to check for healthcare workers filling out health data. But for the ones that do, the rate of infection and death among Marshallese and other Pacific Islanders is far out of proportion to their populations.

"Covid-19 has been devastating for Freely Associated States/Marshallese citizens in certain areas of the US," said Mr Niedenthal.

Aside from the serious underlying health conditions that raise the risk of serious illness or death for Marshallese, Mr Niedenthal cited reasons why the spread of Covid-19 has been problematic in islander communities in the US.

"One reason is fairly straight-forward for this quick spread of Covid in their communities: They can't seem to break with their customs of having their important social gatherings for birthdays, funerals, weddings, and church services," he said.

"Secondly, when an islander gets sick, the Marshallese kind, humanistic ways make them want to surround this sick person and take care of them, not isolate them." 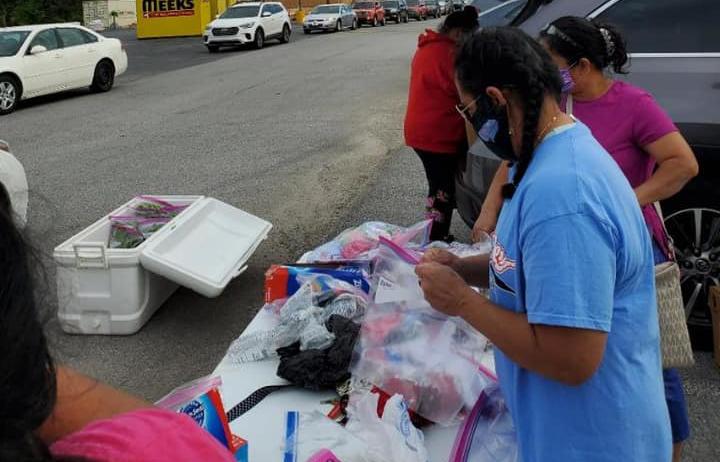 A glove and mask drive organised by the Marshallese community Photo: Arkansas Coalition of Marshallese

A report issued last week on the situation of Marshall Islanders in Arkansas by the country's Ministry of Foreign Affairs bluntly observed: "We are unhealthy. Most of the deceased Marshallese here had underlying illnesses - cancer, diabetes, renal disease (and) hypertension."

Dr Adam Maass, an endocrinologist for Northwest Health System in Arkansas, said people with type 2 diabetes are at high risk for severe illness and death if they get the virus.

"In comments to the Arkansas Democrat Gazette earlier this week, Dr Maass expressed particular worry about the Marshallese living in Northwest Arkansas because they have a high level of diabetes and also because they work in meat processing and other essential industries. "All of that has made them very, very vulnerable," he said.

As Covid-19 spreads rapidly across the United States, closing in on three million cases this week, the Marshall Islands has remained free of Covid-19 by keeping its borders locked down since March 8. The government's Chief Secretary Kino Kabua issued the 15th Covid-19 travel advisory July 3 extending the ban on inbound travel to August 5. 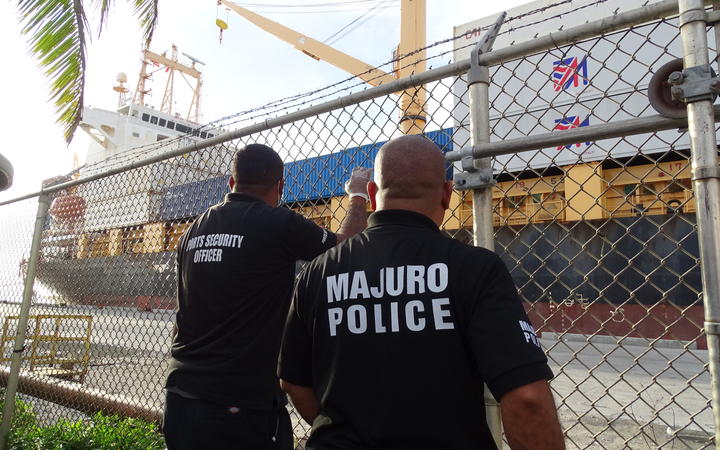 Majuro police enforce a border lockdown at dockside as a container ship offloads food and other goods in the Marshall Islands capital Majuro. The country has banned inbound travel since March 8 to prevent arrival of the coronavirus and so far remains one of the few nations without a confirmed case. Photo: Hilary Hosia.

The way cultural norms have helped Covid-19 infections flourish among Marshallese communities in the US underlines the determination of the Marshall Islands to prevent the virus from entering these islands.

"One of the reasons we are fighting so hard to keep Covid out of the Marshall Islands is for these very same reasons," said Mr Niedenthal.

"We fear we won't be able to stop people from doing what they believe are mandatory expressions of love and faith in their culture."