Papua New Guinea's prime minister says he will work to enable more young people from his country to come to New Zealand for seasonal work. 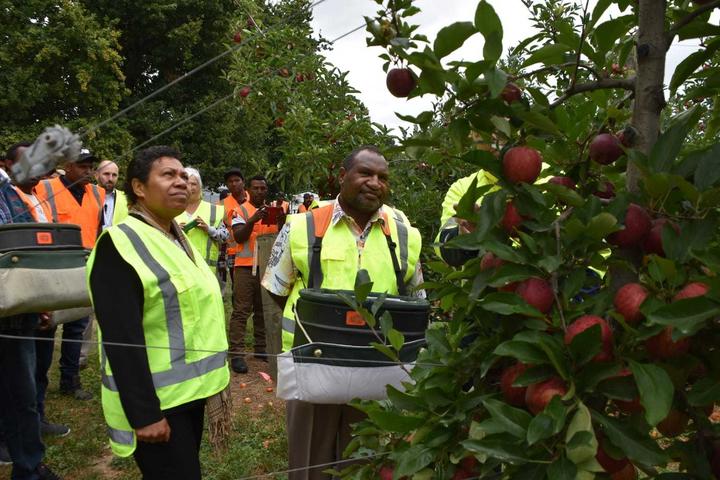 James Marape made the comment yesterday at T&G apple orchard in the Hawke's Bay region of New Zealand, where he is on a four-day state visit.

A number of Papua New Guineans are working at the orchard as part of the Recognised Seasonal Employer, or RSE scheme.

Mr Marape commended the PNG fruit-pickers on the outstanding report he received from their employer.

More than 100 PNG people participate in the RSE scheme each year, although thousands come from some Pacific countries such as Samoa and Vanuatu.

He said when back in PNG, he would get the Labour Department and the National ID Office to speed up processes.

That, he said, would allow more PNG students to come to New Zealand and Australia and find seasonal labour opportunities.

"My delegation has taken note of the issues hindering the process of engaging more of our people in this labour mobility programme and we look forward to rectifying this matter," Mr Marape said.

"Our government aims to promote this programme with New Zealand and Australia, where our people can save some of the money they earn and engage in starting up SMEs when they return home to PNG after they retire."

About 12,000 people from overseas, mostly Pacific Islands countries, work in the RSE scheme. While many work in the fruit-picking sector, Mr Marape said he wanted to increase opportunities for Papua New Guineans to participate in technical avenues as well.

"It is obvious Australia and New Zealand will require our skilled labour in the not too distant future; hence we have to prepare our young people for this, and in the SME secter as well.

"With this, our delegation will return home and ensure our Labour Department and NID processes are streamlined to quickly send more people over to work in New Zealand, and Australia for that matter," Mr Marape said.

The prime minister later visited the Geothermal Plant and hotspings in Rotorua, saying PNG could gain a lot in terms of electrification programmes from New Zealand.