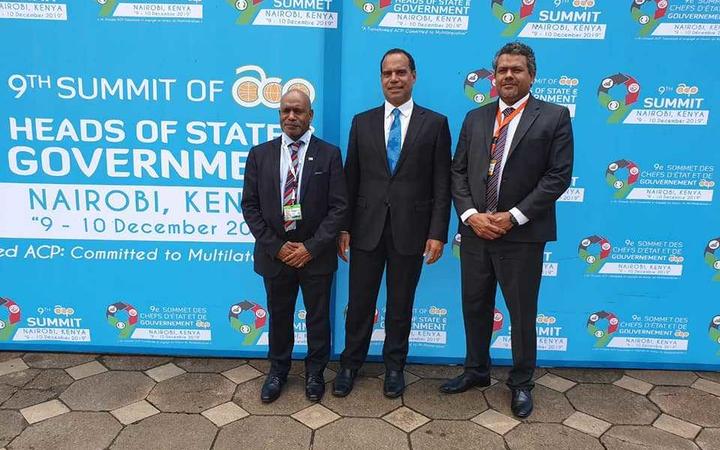 Vanuatu was represented at the ACP 2019 Summit in Kenya by Minister of Foreign Affairs, Ralph Regenvanu (centre) Ambassador to the ACP, John H Licht (right), accompanied by the Chairman of the United Liberation Movement for West Papua, Benny Wenda. Photo: Supplied

A resolution was passed by the group at its 9th ACP Summit of Heads of State and Government, calling for urgent attention to be paid to the rights situation in Indonesia-ruled Papua region.

The resolution supports and adds significant diplomatic weight to a resolution passed by the Pacific Islands Forum in August this year.

Among other things, ACP states called for an international mission to visit Papua and provide an evidence-based, informed report on the human rights situation there.

This report should be submitted to the Pacific Forum in time for its next annual leaders summit in July next year, they said.

The ACP resolution, of which Vanuatu was a key driver, seeks for the Papua human rights situation to be a standing item on the agenda of the United Nations Human Rights Council.

Indonesia's government said it had extended an invitation to the UN Commissioner's office, and that discussions on the matter were ongoing.

But Pacific Island countries voiced concern that the invitation had not materialised in a visit, despite the Commissioner's office having sought access to Papua for years.

The ACP's resolution, which was endorsed unanimously by all ACP members at the summit that concluded at the weekend in Kenya, calls on all concerned parties to:

a) Conduct a mission to West Papua and provide an evidence-based, informed report on the human rights situation before the next meeting of the Pacific Islands Forum Leaders in July 2020;

b) Allow international media access to West Papua to provide ind-ependent coverage on the human rights situation ahead of the next meeting of the Pacific Islands Forum Leaders in July 2020;

c) Work together to address the root causes of the conflict in West Papua by peaceful means, and protect and uphold the human rights of all residents in West Papua; and

d) Seek to include the human rights situation in West Papua as a standing item on the agenda of the United Nations Human Rights Council.

Indonesia's government has previously warned Pacific Island countries not to interfere in issues relating to West Papua, referrring to it as a domestic matter. 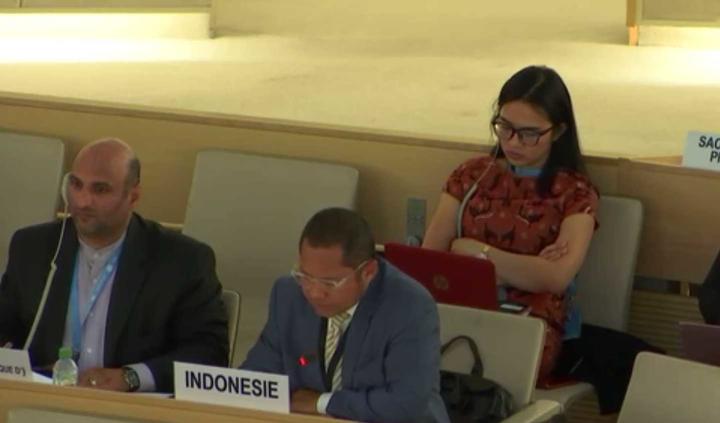 Speaking in September at the UN Human Rights Council in Geneva, Andreano Erwin from Indonesia's Permanent Mission at the UN, characterised recent deadly unrest in Papua as "unfortunate" and "isolated". Photo: WEBTV.UN.ORG

But the administration of Joko Widodo continues to face criticism from international human rights groups over ongoing arrests of West Papuan expressing their independence aspirations.

Widespread pro-independence and anti-racism protests which broke out across the Papuan provinces in August and September prompted an increased security forces deloyment to the region by Indonesia.

Amid the security crackdown, and blocking of internet, some of the protests descended into violent unrest, which left dozens of people dead.