As thousands of delegates enter this convention centre on the outskirts of Madrid, a giant screen pierces through the murky morning fog.

"Tiempo de Actuar," the blue and white letters cry. "Time for action," it tells the suits filing in beneath.

But after nearly two weeks of negotiations, that call doesn't seem to have been heeded. 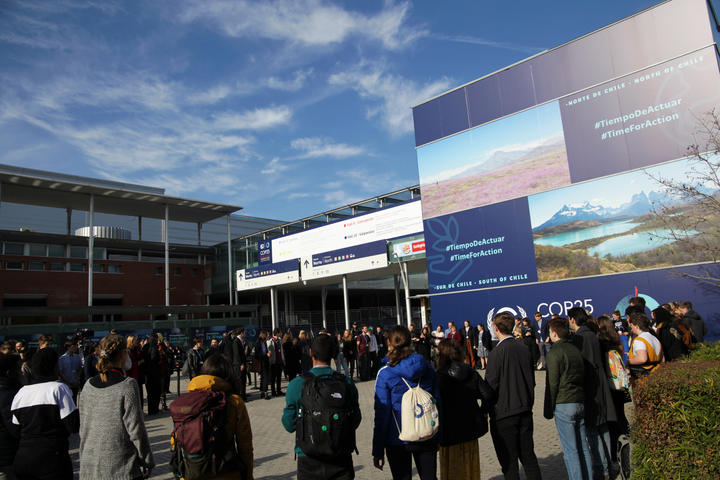 The talks, known as COP25 in UN parlance, appear to be faltering, according to interviews with negotiators, delegates and observers, who say there is a serious risk of failure.

Developing countries are growing increasingly angry at what they have called concerted attempts by high-emitting countries to block progress in Madrid.

"There are troubling signals that many countries are prepared to accept an outcome that represents little more than business as usual," said Tina Stege, the Marshall Islands climate envoy, who chairs a group called the High Ambition Coalition that includes Pacific states, New Zealand and the European Union.

"The urgency as agreed to in the Paris agreement is not matched up by action delivered by those responsible,' said Taneti Maamau, the president of Kiribati. "

Since last Monday, negotiators have been trying to agree the final rules for the Paris Agreement, which comes into force next year and under which nearly every country has to restrict their emissions in order to limit global warming to no more than two degrees.

But few countries are on target to achieve that, let alone the ambition of 1.5 degrees, which scientists believe is needed to save low-lying countries like the Marshall Islands, Kiribati and Tuvalu.

The summit also comes in the wake of mass protests that have drawn millions of students and young people around the world, demanding more urgency in the fight against climate change.

In central Madrid last Friday, half-a-million people gathered as the sun set through the golden autumn leaves on Paseo del Prado. For more than two hours they marched, calling for world leaders to take notice, and commit to immediate reductions.

"Listen to young people, it's our future," said Clara, 22, one of the marchers.

At the COP talks, the ministers said they were listening. Nearly every speech has drawn attention to the strikes that have swept the world. When Greta Thunberg, the Swedish teen who became the emblem of furious young people the world over, arrived in Madrid, she was mobbed by a large crowd.

On Wednesday, she was named Time magazine's person of the year.

But the urgency outside has only met a wall of politics and obstinance inside the convention centre.

"It is very clear that there is a significant disconnect between what those outside these halls are demanding and the positions that are being taken in the negotiating rooms," said Simon Stiell, the climate resilience minister of Grenada, a low-lying country in the Caribbean.

Already, issues like rules around transparency have been kicked to next year's meeting in Glasgow. 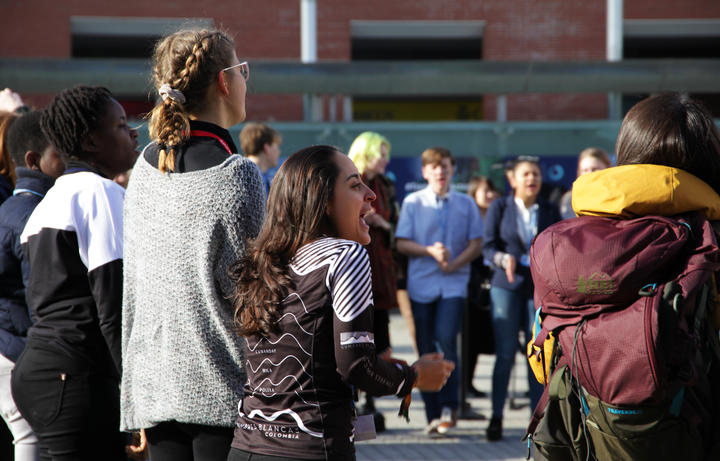 Protestors in Madrid and all over the world are calling for world leaders to take notice, and commit to immediate reductions Photo: UNFCCC/COP25

The two main sticking points continue to be rules around loss and damage and the question of carbon markets, both of which were deferred to this year after they couldn't be agreed a year ago.

But they - again - appear to have reached a deadlock.

"It's tough," one negotiator for a Pacific Island country told RNZ, releasing a deep exhale. Another negotiator said a handful of major emitting countries had blocked agreement in several areas.

The question of loss and damage centres around what compensation could be paid to small countries that are affected by climate change, a problem their emissions contributed little to, if they're paid anything at all.

The carbon market question is more technical. It revolves around a marketplace for carbon credits and the regulations that would govern that system. Say, if one country exceeds their Paris targets, their credits could be traded with another country so that they could meet theirs.

But the debate has stuck over how tightly-regulated that market should be. Small Pacific countries are calling for tough measures that tie the market directly to emissions reductions, with strict transparency requirements.

However a few countries, including Australia, want to use measures that could see credits "double-counted" or "carried over." In Australia's case, it is wanting to use credits it still has from the Kyoto Protocol of the 1990s to meet its Paris targets. More than 100 countries, including New Zealand, have spoken directly against such a loophole, saying it goes against the spirit of the Paris agreement.

At events like these - where a unanimous vote is needed to pass anything - it only takes a few countries to derail a plan. On Tuesday, a member of the European parliament, Bas Eickhout, hit out at Australia, Brazil and Saudi Arabia, telling the agency Euractiv that they were blocking rules that would govern carbon markets.

"The same parties that negotiated every single word and sentence in the [Paris] Agreement, are this week suddenly finding legal loopholes, using narrow interpretations and disguised excuses to renegotiate the spirit of the agreement to conveniently opt out of their obligations," said Feturi Elisaia, Samoa's ambassador to the United Nations, who is leading that country's delegation. 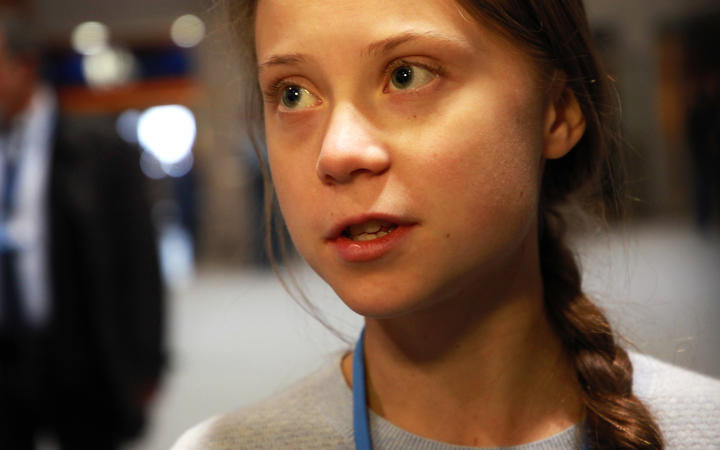 Time Magazine's "Person of the Year 2019" Greta Thunberg has called out world leaders for their empty promises at COP25 in Madrid. Photo: UNFCCC/COP25

The energy and urgency seen by the loud and lively demonstrations on streets world-wide is a stark contrast to the diplomatic tedium inside Feria de Madrid, where hours have been whittled away with arguments over the placement of commas, brackets and phrases; Over whether to 'note', 'be concerned by' or other bureaucratese; Where great portions of speeches are consumed by delegates thanking each other.

"The real danger is when politicians and CEOs are making it look like real action is happening when, in fact, almost nothing is being done apart from clever accounting and creative PR," the 16-year-old said.

Mr Stiell agreed: "This is not an academic exercise. This has to go beyond talk and the political rhetoric that we are seeing," he said. "The call for greater ambition is not just a wish, it's an absolute necessity for those who are struggling."

While negotiations on the final points will continue until the final day - Friday - and possibly be extended to Saturday, the mood among many here is low. Eyes are weary, deflated sighs a common greeting.

"Our role over the coming days is to apply as much pressure to ensure that the outcome of this COP is meaningful," said Mr Stiell, his voice bellowing with frustration. "And [that it] pushes this process of greater ambition and addressing the challenges of this climate crisis in a meaningful way."

If these issues are not resolved, then the questions will take over next year's talks, getting in the way of the substantive issue: the fact that by next year at the latest, countries are supposed to realign their emissions-cutting targets with scientific advice of staying within 2 degrees.

"Climate change is a daily occurrence that has daily consequences for the lives of our people," said Mr Maamau, the Kiribati president. "They can't wait 12 months."

With three days to go, there won't be much sleep being had.

"We've pulled off miracles before," said the Pacific negotiator before letting off another sigh. "But it's been pretty frustrating." 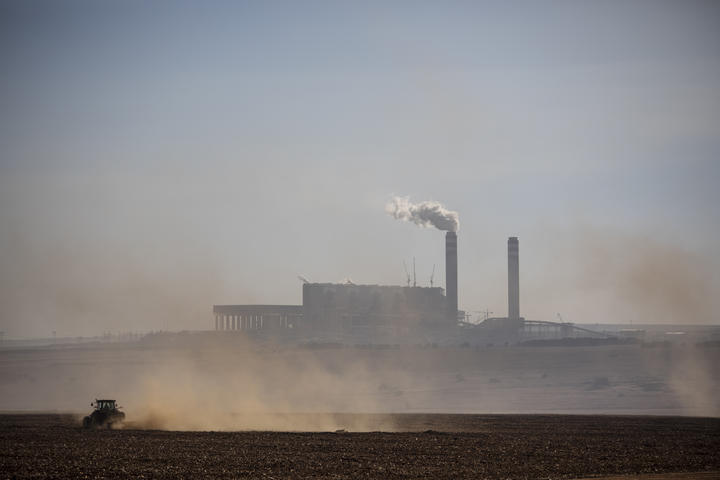 In this file photo taken on June 13, 2019 A farmer works with a tractor in front of the Kendal Power Station located in eMalahleni, part of South Africa's Highveld region turned over to mines and power plants. Photo: AFP or licensors