Asylum seekers sent to a new detention centre in Papua New Guinea are the victims of a flawed process, a refugee advocate says. 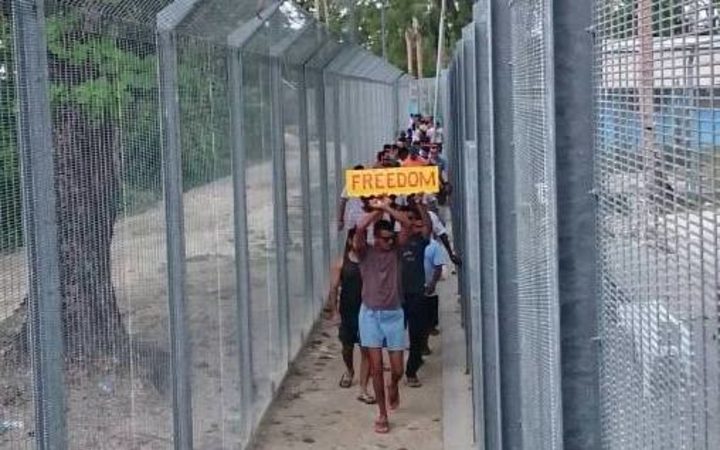 An image from the 84th day of protest in the Manus Island detention centre. Photo: supplied

About 50 men deemed to be non-refugees or negatives were moved to Port Moresby's Bomana prison at the weekend.

Advocate Anne Moon said their status was defined by PNG's "flawed" refugee determination process, which she described as "a farce".

"There were no investigations done properly," she said. "We can show by their refugee status assessments that it was flawed and that's for the majority of them."

About 85 non-refugees are left in PNG, including about 30 men who abstained from the process, Ms Moon said.

"Therefore they did not take part in that process."

Further evidence that the process was deficient were the Positive Deportation Risk Assessments given to some of the non-refugees, the advocate said.

These so called negative positives, were refused refugee status but judged in danger of death if returned to their countries of origin.

Ms Moon estimated about 30 non-refugees were granted these assessments. The PNG government did not respond to a request for confirmation of the number.

A note from the government to non-refugees seen by RNZ Pacific described them as "unlawful non-citizens" to be detained "pending their departure".

But Ms Moon said most of the non-refugees would not leave voluntarily and could not be deported.

"Two of those community groups are Iranian and Pakistani and neither of those countries will accept forced deportation," she said.

"They can't be returned unless they volunteer. Anybody with any sense would know that if they've put up with six years of this hell, if they could've gone home they would've," she said.

"So they're not going to go home voluntarily and they can't be forced to go home."

That would leave some of the most mentally unwell Manus Island men languishing at Bomana indefinitely, Ms Moon said.

"Most of them at some point have tried to commit suicide. They will again. Once you take all hope there's nothing left."

Ms Moon said she had lost contact with non-refugees moved to Bomana. Manus Island refugee Shaminda Kanipathi said the men had had their mobile phones confiscated.

"They cannot communicate with anyone, including the doctors who are helping with their Medevac applications. This will prevent them from getting the treatment they have desperately needed for years," Mr Kanapathi said.

The refugee estimated the combined number of refugees and non-refugees in PNG had fallen to about 250. Of the non-refugees, 52 are in Bomana, 26 are in Port Moresby's Granville Motel awaiting medical treatment and five are still on Manus, he said.

Also on the island, 104 refugees are in the East Lorengau detention centre and 33 are in the West Haus compound, while about 20 men are trying to settle in the PNG community, he said.

"Before we were transferred to Manus Island against our will, we were told that we would be resettled in PNG if we were found to be legitimate refugees," he said.

"Because of this, many asylum seekers refused to undergo the refugee claim process, fearing permanent resettlement in PNG. These men were given a negative refugee assessment, not because their claims as refugees are not valid, but because they refused to be part of the process.

"Those people who refused to initially participate in refugee assessment should be reassessed and given a fair evaluation of their asylum claims."

Ms Moon said there were human rights lawyers available to reassess the men's claims to "make sure it's done properly".