An apple harvest no one will ever forget

Simon Easton sounds relaxed. The fourth-generation apple farmer grows 61 hectares of fruit outside Motueka with his brother. They are nearly at the end of this year’s harvest - a week more picking, a month more packing and they’re done. 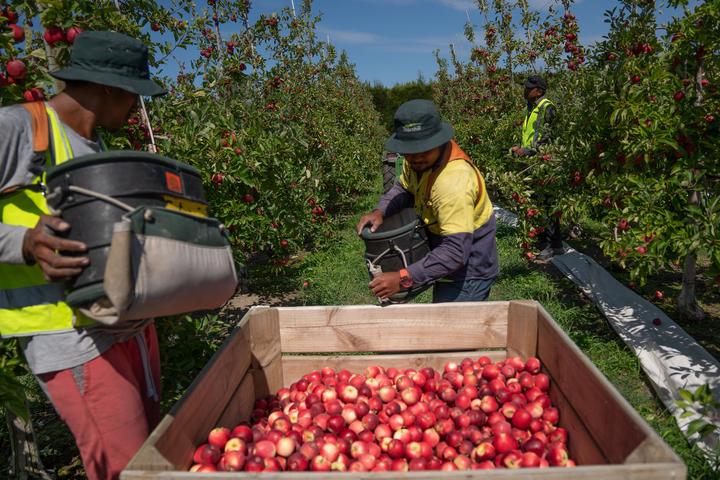 On a scale of one to 10, Easton reckons his stress levels this season have been up around 9.8. Particularly at the beginning of the pandemic.

“Early on we didn’t know if we were an essential service, it wasn’t clarified. We had a few days when it became clear we were heading towards a lockdown and we really didn’t even know if we could pick the apples. If we couldn’t, then we were screwed."

Even once that was sorted, it didn't get a lot easier.

For example “there was the risk of getting Covid-19 in your picking crew. So yes, very stressful." 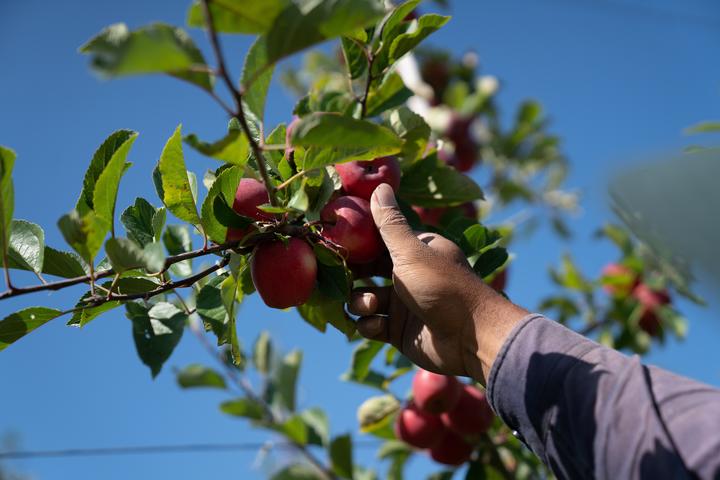 The Easton farm isn’t huge. Still, the brothers have 62 Pacific Island workers picking and packing apples this season under the recognised seasonal employer (RSE) scheme, as well as a number of locals.

Establishing safe bubbles, particularly for the RSE workers was tough, because it’s not just about work bubbles, it’s about home and travel bubbles too.

The 62 Tongan and ni-Vanuatu workers live in a mixture of houses and purpose-built accommodation blocks on the Easton farm and a neighbouring property.

Easton had to work out how to form bubbles for his RSE workers - and how to keep people safe and healthy in those bubbles.

“It was very difficult. In the end we decided we had to basically make each house a bubble,” he says. The crews lived and ate together, picked together, travelled to the orchards in the same van, and once there used the same facilities.

“So they had their own tractor driver and their own washing station - water, hand cleaner, paper towels. There was a separate toilet for each bubble, so we just picked it up and moved it around with each group and got it cleaned regularly.”

And if you think it’s hard keeping your teenage kids or your flatmates following strict isolation rules, imagine trying to keep 60-odd fruit pickers together - and apart.

“We had to educate them that they had to stay in their bubbles, they couldn’t cross the courtyard to hang out with their mates. And just little things, like don’t share a cigarette, even in your own bubble and keep washing your hands. Washing hands was a big one.”

Many of Easton’s RSE workers have been coming to the farm for years. In a normal year, they get together after work, meet up for kava on their days off, pile in the van and go to town for supplies.

“We’ve had to bang all that on the head, unfortunately,” Easton says. “They can’t even go to town when they are sick and buy aspirin. The pastoral care officers have to do all the shopping.”

The same tricky decisions are being made on farms all over the country.

Some of the bigger orchards have introduced a system of wristbands to keep different bubbles apart. If you wear a blue wristband, you live in a house with others in the blue team, travel in the blue team van, work, eat and socialise only with the blue team.

If there is more than one wristband bubble sharing the same accommodation block then washing and toilet facilities have to be kept separate and mealtimes have to be staggered to keep cooking teams separate.

Everything has to be disinfected between teams. 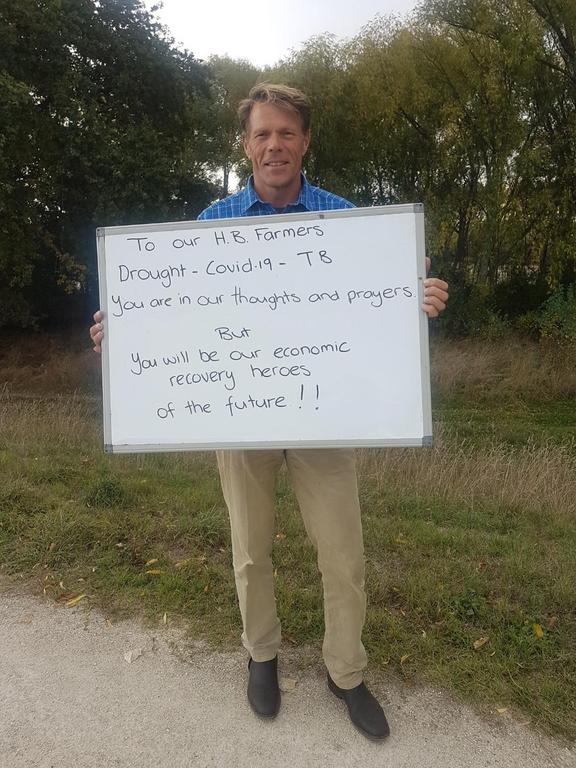 Jerf van Beek is Horticulture NZ’s national coordinator for season labour; he also runs an accommodation business for close to 350 RSE workers in the Hawkes Bay.

“I've got a staff member living at one of these larger accommodation sites, and all she does is sterilise,” he says.

“So as soon as the workers go out, all the light switches, all the door handles, everything gets sterilised. That's the way we have been able to keep Covid-19 out.”

This year’s apple harvest is expected to be close on 600,000 tonnes. Ironically, it’s a bumper crop. Unlike cows, apples love the dry weather if there's water for irrigation.

So how many apples are New Zealand's growers having to harvest under lockdown?

If for ease of calculation you say an average apple weighs 140g, that’s seven apples in a kilo and 7000 in a tonne. That works out at 4.2 billion apples New Zealand farmers need to get off the trees and out of the gates this year.

Helping with the harvest are some of the 15,550 seasonal workers in the country this year, and on top of that there are New Zealanders and backpackers. All are needed to pick the crop, but all bring their own tough decisions around bubbles and safety.

“Backpackers became a problem for us because they were living in backpacker hostels,” van Beek says. “To maintain our essential service status we had to guarantee to MPI that our workforce was working, living and travelling in bubbles. And for backpackers, that was really difficult.”

In the end, civil defence got involved.

“We put pressure on our backpacker fraternity to make sure they were segregating in their hostels as well, and that they were travelling in the groups that they lived with. We got there.”

Van Beek organised his bubbles around the size of a van. Each van load was its own distinct bubble, so there wasn’t any risk.

Which was perfect, except that’s not what people from the outside saw. And the dob-in-a-Covid-lockdown-breaker network had a field day.

“They see this group of 15 guys jam-packed in a van, and they're having a good old time," Van Beek says. ". And straight away people are going on social media and they are going ‘What’s happening here? I'm not even allowed to have my elderly mother in my car. And here they are, you know...’”

Same thing when a couple of van bubbles went to Hastings racecourse for a bit of R&R one sunny lockdown weekend.

“They are going ‘Here I am stuck in my bubble at home and I'm not allowed to do anything and these guys are having fun and playing sport.’ It wasn’t a good look, so unfortunately we had to ask them to stop.”

Pain in the packhouse

It’s annoying, but manageable, van Beek says. More difficult has been trying to run a packhouse without people getting close to each other.

Think of a packhouse as a factory for apples. A huge shed where apples go into big washing troughs and then shuffle along conveyor belts where they get graded and put into trays and boxes. 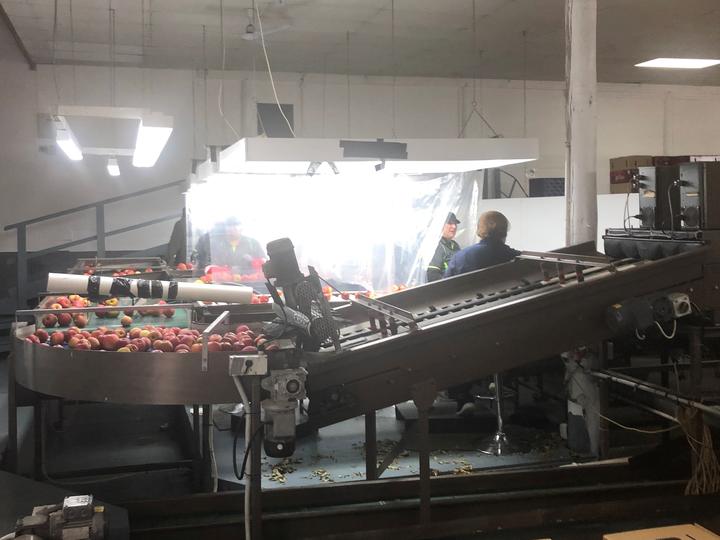 Apple packing is often a surprisingly manual process on New Zealand farms. And farmers told Newsroom trying to have people two metres apart didn’t work. So packhouse owners had to get creative

The solution for many, like Havelock North Fruit Company, which produces the teeny Rockit apples, was installing plastic screens between each worker - turning the workspace into a series of cubicles, with the conveyor belts in front.

“We've built polythene frames and put them either side of people,” says Rockit Global Ltd CEO Austin Mortimer. “So if they look to the left or to the right, there's a polythene sheet there that they can't breathe past or cough past so and everyone's facing in one direction.”

Same in the lunch rooms. Workers take staggered breaks in shifts and sit in a kind of plastic bubble.

Restrictions have cut productivity by 20 percent, Mortimer says, but the market is strong, including the export market.

“We aren't actually able to meet demand. We are packing and shipping everything we could possibly get out the door at the moment. The constraint in our business right now is simply due to the lower numbers in the pack house to get the apples out the door.”

Actually, “mixed” might be a better way to describe demand from around the world.

In a normal year, a lot of New Zealand apples end up in so-called “wet markets” in China - the huge fruit, vegetable, meat and fish markets many Chinese use for domestic and wholesale supplies. 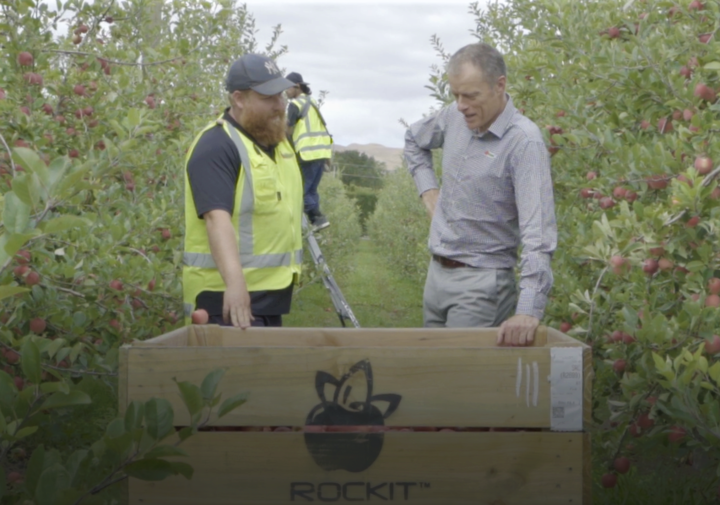 Most of these wet markets have now reopened after being shut down when one was identified as the original source of the Covid-19 outbreak. But customers are not surprisingly reluctant to go back, Rockit Global Ltd's Austin Mortimer says. Demand has slumped where wet markets are the norm.

Demand from Thailand is also down, as the country struggles with the shutdown of its tourism sector. But other markets are buoyant.

Singapore, for example, has doubled its usual apple orders, Mortimer says, and demand is strong from places where most people buy from supermarkets, he says.

“New Zealand-grown fruit has always been respected. But I think given Covid-19, fruit that’s grown and packaged in New Zealand, virtually untouched since it's left our shores, has hit a vulnerable spot for a lot of Asian customers.

“We’ve started to emphasise the provenance of our apples and the fact they are washed and packed and almost sealed here in New Zealand.” 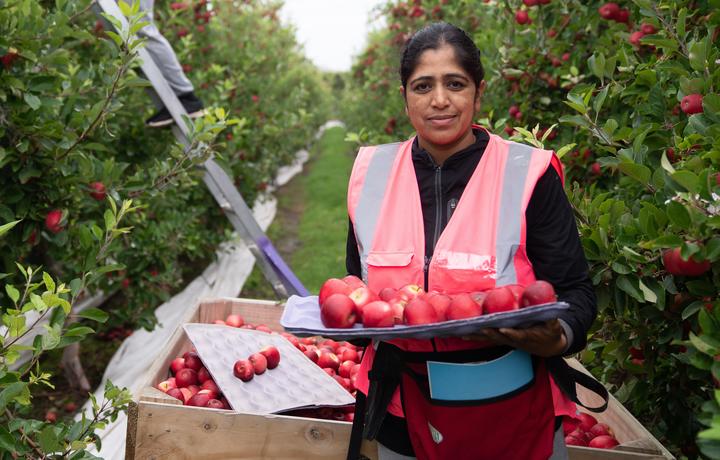 Mortimer says many Asian customers look at New Zealand as having successfully tacked the coronavirus, and that helps too.

“They put two and two together and realise that there's such a low infection rate here in New Zealand. The chances of somebody picking or packing an apple here having been infected is almost negligible.”

He recognises there’s no logic to that - the science shows no coronavirus particles are going to survive three weeks in a refrigerated container.

But sentiment is strong.

“Consumers still make those little connections around food safety,m which is always high on their priority list.”

Apples sales in Europe and America have benefited from the fact fewer people are eating out, and more are thinking about ways to boost their immune system.

An apple a day keeping the doctor away, and all that.

But that doesn’t mean the last few weeks haven’t been super-hard, Mortimer says.

“Oh my God, that week we went to alert level 4, my stress levels were probably at a heart attack-inducing level.

“It's very hard in a pack house to maintain any level of distancing between people and we've never done it before so it was all new.

“People were afraid for their own safety, they were afraid for the safety or their families and everybody was exhausted just from the amount of brain power that was going on in the background - constantly trying to figure out the consequences of everything.

“By 3pm, everybody was beat from the sheer mental exhaustion and all the stress.”