What becomes of the housing market?

Victoria Butterworth was pretty sure she had a house post-lockdown buyers would like. It’s a four-bedroom, two bathroom beautifully renovated home, at the end of a cul-de-sac, on three levels, with great views over the upper harbour, lots of sun and garaging, and a swimming pool. 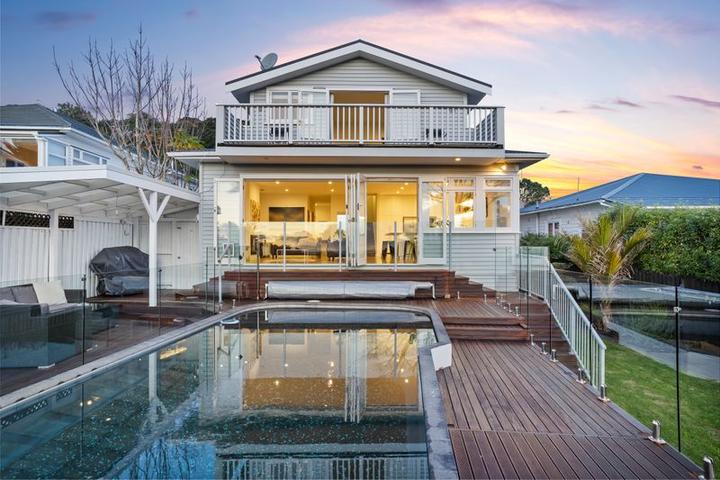 Butterworth's house was on the market for a week and still sold for nearly 50% over CV.  Photo: Ray White

Butterworth was expecting to get over the CV, which was low - $1.73 million. She was not expecting to get four offers ranging between $2 million and $2.3 million in the first week, and to sell her house for $2.563 million - 50 percent over CV.

But her real estate agent, Rachel Berry from Ray White, says that’s not unusual at the moment. The housing market is stronger post-Covid than it was in June 2019, she says. In fact the most recent Real Estate Institute figures show median house prices rose 9.2 percent in June and in many parts of the country - including Otago, arguably one of the worst hit regions economically - there were double digit year-on-year increases.

This buoyant market flies in the face of what economists were predicting just three months ago. For example, Kiwibank chief economist Jarrod Kerr who, in an interview with Two Cents Worth’s Bernard Hickey in April said house prices could fall around 10-20 percent over the next year, before rebounding into 2022 and 2023.

Faced with the early stages of an unprecedented crisis, economists trying to pick the housing market tended to look at the most recent global downturn, the Global Financial Crisis (GFC) in 2007-2008. Then, rising unemployment and job uncertainty curtailed demand for homes, while bank foreclosures increased the supply on the market. Inevitably prices fell - around 10 percent. 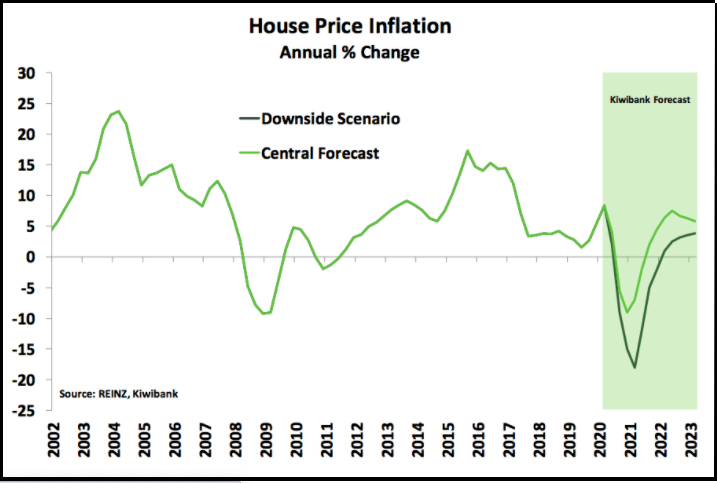 Kiwibank was predicting a massive drop in house prices in this graph released during the lockdown.  Photo: Supplied

But this time it’s different - at least in the short term.

“We've got a lot of factors supporting the market,” says Bindi Norwell, chief executive of the Real Estate Institute. “There have been low interest rates, and wage subsidies, which have been helping people pay mortgages and rent. And we’ve also had mortgage holidays.”

These have helped avoid any rush of mortgagee sales which might have brought more homes onto the market. In fact, there’s a continuing housing shortage - a very different situation to the ample supply of homes in the market at the time of the GFC.

“We've had a lack of listings coming onto the market,” Norwell says. “And that's put more pressure and more competition on those properties that people want, which has bolstered the price.”

Some of the strongest interest has come from first home buyers, who have taken advantage of another support measure, the Reserve Bank’s lifting of 80 percent loan-to-value restrictions on mortgage lending for the next year or so.

This wasn’t the aim of the measure - RBNZ introduced it to encourage banks to lend more to homeowners or small businesses in Covid-related financial difficulties.

But it’s given people struggling to raise a 20 percent deposit on their home a 12-month window to get a mortgage without it. Many are rushing to take it.

How about future house prices?

Norwell says September will be a key month in terms of what the medium-term future might be for the housing market.

“First, the wage subsidies will finish. Second,  the mortgage holidays will finish. And third, we're got an election.” And that tends to create uncertainty. 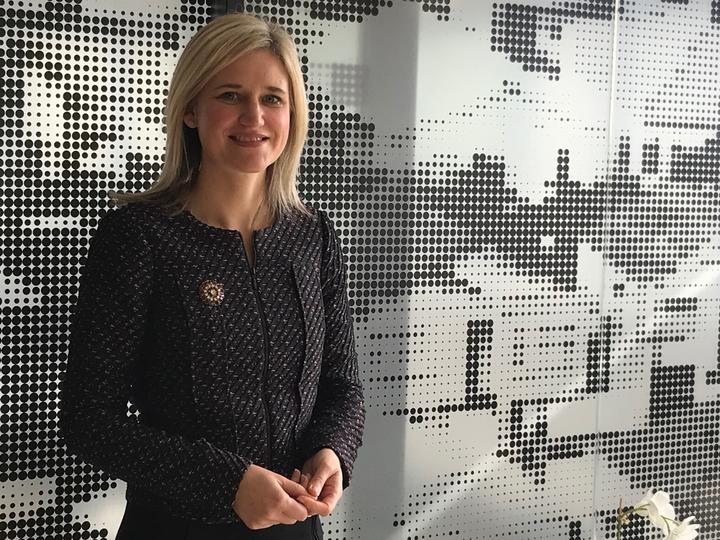 “Who knows what will happen; whether the market is recovered enough to be able to cope without these factors supporting it, or whether it will see some impact from that. But at the moment it's defying all reasoning of what was originally predicted.”

Kiwibank senior economist Jeremy Couchman says unemployment is key. He is expecting jobless figures to rise, with companies cutting the number of workers they have, and an increasing number of businesses going under.

He predicts unemployment could potentially rise to around 10 percent, and that would see house prices likely to fall.

“The unemployment rate peaked at around 6 or 7 percent in the GFC. And we saw some quite sharp declines in house prices back then - I think 8 to 9 percent at the trough.”

If unemployment got to 10 percent “we think there will probably be a similar decline in house prices,” Couchman says.

And insolvency specialist John Fisk from PwC says Covid-related unemployment could continue for some years as SME businesses struggle on, but eventually fail.

“In the GFC, a lot of banks found the non performing loans peaked about three years after the start of the GFC.”

A boost for affordability?

While house price falls are tough for homeowners, they would be a big relief for those New Zealanders, including so-called ‘millennial renters’, who for the last few years have had no real hope of getting into the housing market.

For them, a slump is a much-needed move towards affordability. 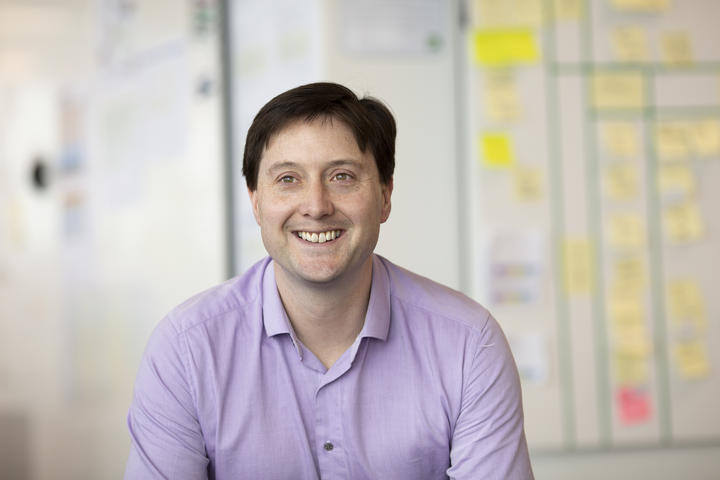 The market is unlikely to pull back to three times incomes, he says, but it might get to, say, six in Auckland and four or five in other parts of the country.

“There needs to be a price reset in terms of house prices. I think what Covid is doing is possibly accelerating the pace at which that reset might happen.” 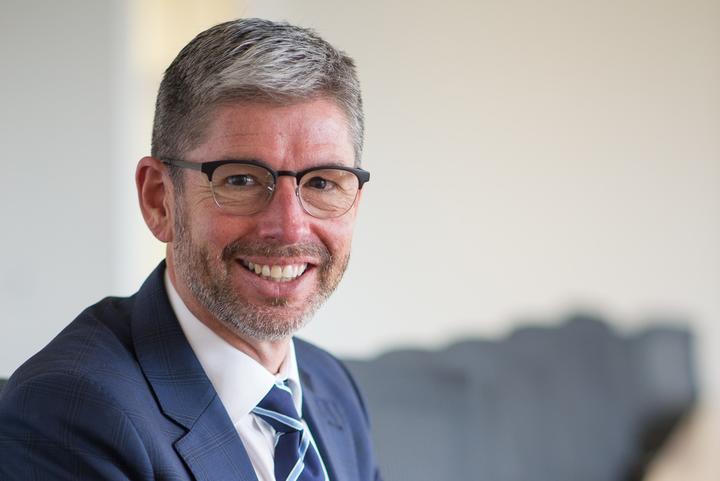