This year a study out of Sussex University referenced the term ‘vicarious trauma’ to describe how Muslims react to events that happen in different parts of the world.

Because of a shared sense of community, a brotherhood, Muslims often feel a deep sense of sadness, even a personal grief, when they hear or read about the suffering of others. 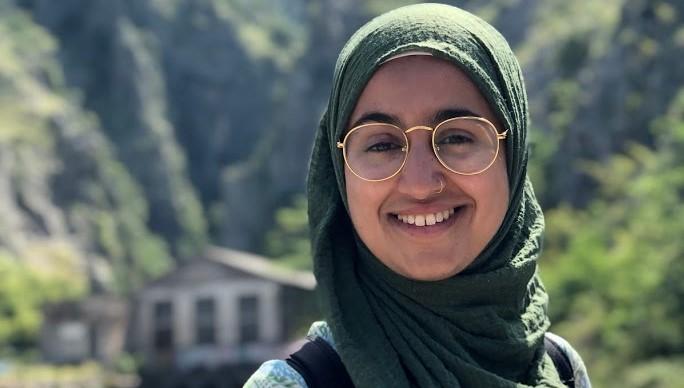 These days, it’s hard to escape. When looking at the headlines of events taking place around the world, it often feels to many in the community as if Muslims are a constant target for those with far-right ideologies, populist political figures growing in popularity by focusing on immigrants and refugees, and demagogues scapegoating Muslim minorities to expand their control.

As Muslims, we watch with a sense of growing dread and helplessness the ethnic cleansing of Rohingya in Myanmar, the millions of Uyghurs held in concentration camps in China, the lynch mobs hunting Muslims in India and the millions of Syrians fleeing for their lives only to face cruel and unsympathetic borders.

It often gets overwhelming.

On the day of the Christchurch attacks a year ago, Muslim communities around the world felt a very similiar shock to Muslims in New Zealand. The sudden and calculated attack on worshipers during Friday prayers felt to millions worldwide like it had struck the heart of their own neighbourhoods, their own mosques.

Poet and activist Suhaiymah Manzoor Khan remembers the day very well, and how she felt attending Friday prayers in London only hours after hearing the news.

“In the women’s section of my mosque, there’s a very narrow set of stairs. I’ve always thought ‘oh God, this badly needs renovating’, because it takes so long for everyone to get out,” she says.

“It took on a more sinister meaning on that day, and I kind of thought ‘wow, there are no escape routes in here’. Then you suddenly start thinking of fears you used to brush off before and think ‘gosh, I’m so paranoid’.”

Those fears included imagining scenarios where her local mosque would be attacked, or if members of her community and family were targeted on their way back home from prayers.

“It was this sudden realisation that it’s not absurd, it’s not crazy, it doesn’t make us insane to imagine an incident like what happened (in Christchurch), happening.”

Khan has used her voice as a poet to speak out against the issues she sees in British society, and to address the growing xenophobia head on. The video of her poem 'This Is Not A Humanising Poem' was shared widely on social media, and earned her praise for questioning the double standards of what it meant to be a citizen in a country but constantly have to jump through hoops to prove loyalty.

The Friday of the Christchurch attacks, her local imam looked visibly distressed, but tried to contain his own uncertainty to reassure his congregation. He told them to consider focusing on exercise in their lives to improve their fitness. To be able to protect themselves and run in the event of an attack.

“I remember staying at the mosque a long long time that day, and just crying into my hands.”

Khan says she felt an easy and sinister sense of validation about how she often felt as a visibly Muslim woman in British society. The Christchurch attacks proved that her concerns about growing anti-Muslim and anti-immigrant sentiments she was seeing all around her could lead to horrendous act of violence, and that her safety and that of her family weren’t guaranteed.

Islamophobic attacks have been on a steady rise in the UK over the last few years, according to the country’s Islamophobia watchdog Tell MAMA. They’re fueled by a rise in anti-immigration sentiments in the era of Brexit, and the emergence of far-right groups like the English Defence League and its de facto leader Tommy Robinson.

Another figure who’s fed the angry hoardes is the country’s newly elected Prime Minister Boris Johnson, who once described Islamophobia as the “natural reaction” to Islam - compared women who wear the niqab to bank robbers and postal boxes - and in 2005 wrote “the problem is Islam. Islam is the problem”.

Johnson and other public figures’ continued appeals to the fear and distrust white working class communities are feeling about immigrants has had real impacts on the Muslim community. In the weeks after the niqab comments, dozens of reports of verbal and physical attacks

Last year, a YouGov study found racially fuelled attacks had gone up by 14% and religious hate crime went up by 40%. In 2015, another found 56% of the British public believed Islam was a threat to Western democracy.

“My family migrated from Pakistan to West Yorkshire in the 1960s. People would say to them ‘Go home Pakis, go home’,” says Khan.

“And here we are 60 years later, and that sentiment remains.”

In 2017, things came to a head when a mosque in East London was attacked. 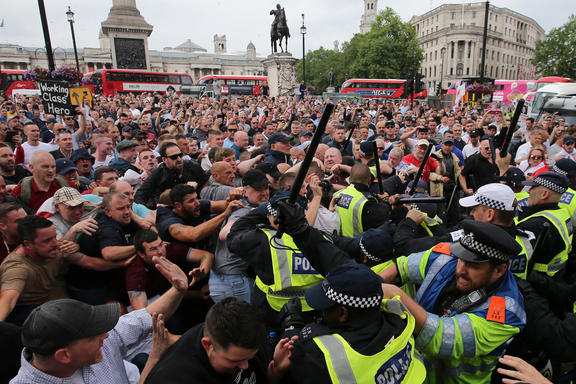 Protesters scuffle with police at the junction of Whitehall and The Mall during a gathering by supporters of far-right spokesman Tommy Robinson in central London on June 9, 2018, following the jailing of Tommy Robinson for contempt of court. (Photo by Daniel LEAL-OLIVAS / AFP) Photo: AFP or licensors

Darren Osbourn, a 48 year-old man who heavily consumed anti-Muslim propaganda like that of Tommy Robinson, drove his van into worhsippers outside the Finsbury Park Mosque, killing one person and injuring nine.

Khan says attacks like this, and the constant reports of women being pushed on trains, having their hijabs ripped from their heads by strangers in the street, create a sense of trauma for her and her community.

“The thing about communal trauma, is that I don’t have to have personally experienced that sort of verbal or physical forms of violence because of wearing hijab. But because I know that other people have because I’ve had to read those stories, I then still experience the hyper-vigilance felt by all women who wear the hijab.”

Khan says she wants to wear a coat with a hood on when she gets onto the train, or the bus, to hide her hijab. She tried to act overly friendly with people so as not to upset anyone and face an angry or violent reaction. These days that has become her norm.

Over five episodes, and five intimate conversations, The Guest House will unpack the complex and often conflicting stages of grief Muslims passed through as a community, to make sense of what was a senseless act, and to say the things they never had a chance to say.