Googie Tapsell and the Patu Parāoa

This patu parāoa (whalebone hand weapon) used during the New Zealand Wars offers a window or "little cobweb” into New Zealand’s past. 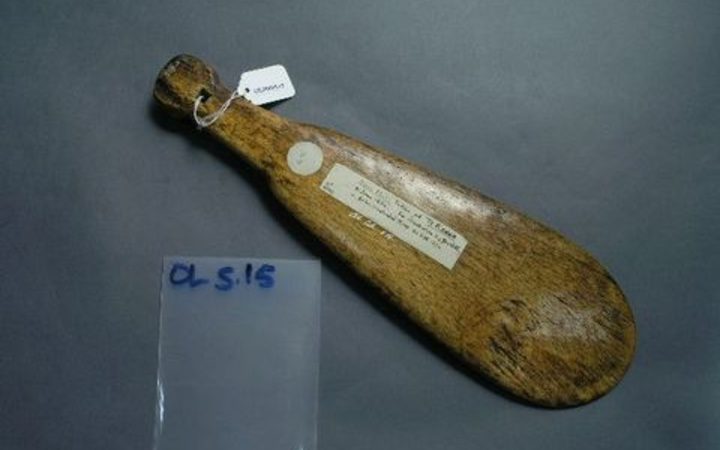 The patu parāoa, now safely stored at Te Papa, may look ornamental, but do not be deceived.

It has many stories to tell, including an unlikely connection with a British general.

In Te Ao Māori, taonga resonate according to the events and people with whom they are associated.

It’s believed this patu, a whalebone hand weapon, was used in the battle of Te Ranga in Tauranga Moana, on 21 June 1864.

“After the Māori triumph at Gate Pā was the battle of Te Ranga, which we lost. The colonial forces overwhelmed us and overtook us,” Te Papa’s acting head of Mātauranga Māori, Puawai Cairns, says.

“It’s a lot more complicated but I see Te Ranga as a huge tragedy and great sadness for the tribes of Tauranga.” 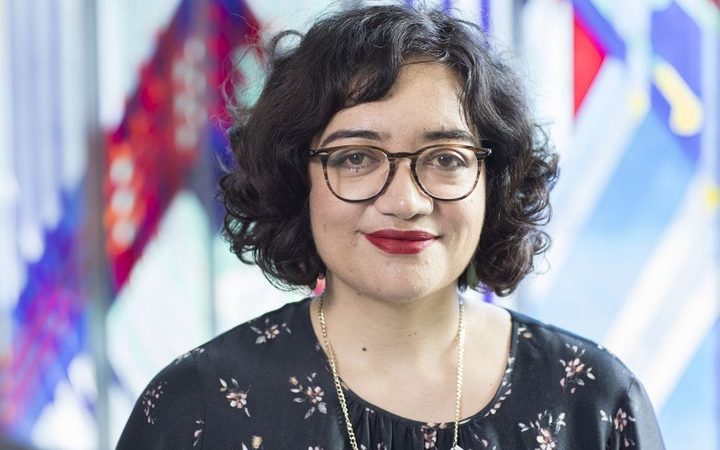 For Cairns, who has tribal affiliations to the iwi of Tauranga Moana, Ngāi te Rangi, Ngāti Ranginui and Ngāti Pūkenga, this patu has personal significance.

“As a descendant of Tauranga, as someone who will always have the soul tie back to my ancestors, this is like a little window or a little cobweb that helps me connect to home and to the stories I was brought up with,” she says.

The patu has been well-handled and had a lot of wear, Cairns says, with a good patina on it.

While we don’t know exactly who used the patu in battle, a paper label fixed to its surface in another century tells of a fleeting association with an English soldier, a collision of Māori and Pākehā worlds that echoes across time and space.

His name was General Horatio Gordon Robley, and he fought at Gate Pā and Te Ranga.

During his time in New Zealand, Robley sent sketches to the Illustrated London News, Victorian Britain’s most widely read weekly newspaper, communicating a vision of the New Zealand Wars to the seat of colonial power.

That included a sketch of what is believed to be this very patu.

Cairns says she has been trying to figure out this special object’s history, ever since she started working as a curator.

“If it is one of the weapons in the sketch referred to on the label, this patu parāoa becomes a witness to a very profound event in my whakapapa,” Cairns says. 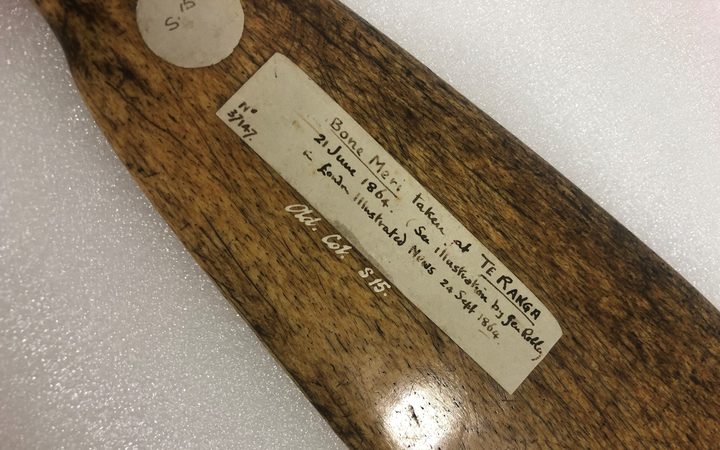 The patu comes with a note saying it was illustrated by General Robley in the London Illustrated News, 24 September 1864. Photo: Te Papa

Tim Walker is an expert on Robley who’s been following his trail for four decades.

He says that Robley’s fascination with Māori never left him: more than 30 years after he left New Zealand, he was writing books about tā moko and collecting artefacts across Europe, continuing to document the culture for posterity.

“The really interesting thing about that patu is that the day that he drew it was the beginning of his really close engagement with local Māori,” Walker says.

Robley was in New Zealand for just 18 months but his art made him a kind of messenger between worlds. And as he drew Māori and their environment, Robley’s life became intertwined with theirs.

While living in New Zealand, Robley fathered a child in Tauranga with a woman called Harete Mauao.

Cairns says she had been told that he abandoned the child, but she later learned that he tried to retain contact, and sent money to the family.

“It had to be very discreet because he was a son of a family that had some repute and that he had a child out of wedlock to a native woman would have been considered hugely scandalous.” 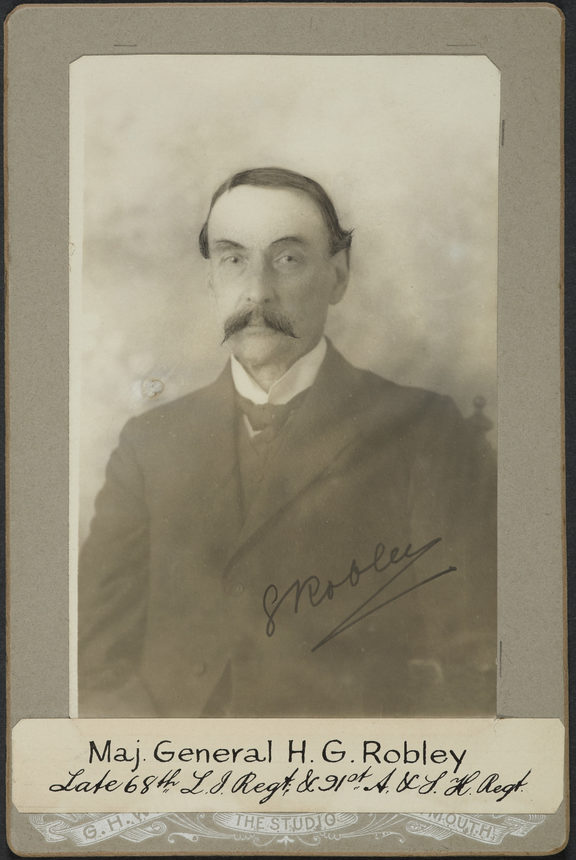 One of his descendants is Googie Tapsell, 84, who lives in Maketu.

Robley was her great-grandfather.

“Googie remembered that the story she’d grown up with was that the Robley name was shameful as part of her whakapapa,” Walker says.

He was able to tell Tapsell a little bit more about Robley.

“As soon as I was able to give them a greater sense of who he was and what he’d really been interested in - her family, her children and grandchildren, carry that name with some pride now.”

Tapsell says Robley did make contact with the family, including her mother.

“He wanted to take her back to England for her education, to be educated. But she didn’t want to go, I know that much.”

Robley later became a prominent collector of mokomokai, or preserved Māori heads, when he retired in England - his collection has recently been repatriated by Te Papa - but that’s another story altogether.

As to the patu, Cairns says they are weapons but also emblems of chieftainship, of rangatiratanga.

“In Māori community life, weapons like this, taonga like these, were handed down through generations, so they themselves became almost mnemonic devices to help generations remember. So museums are just catching up to what Māori have always done,” Cairns says.