The names are instantly recognisable to a generation or more, because they were the toys that belonged to us all... Humpty, Jemima, Big Ted, Little Ted and of course New Zealand's own Manu.

Sometime it's not the significant or serious things that tell us most about ourselves. So in this week's Ours we look at the dolls that really were ours.

As Te Papa's Modern New Zealand curator Kirstie Ross says "they're part of shared national popular culture and memory". They were on the one and only TV channel, and we entered the world of games, crafts, stories and these toys through the iconic Play School door ("Ready to knock? Turn the lock. Play School!"). If nothing else, we learnt dozens of things to do with old toilet rolls and cotton wool. 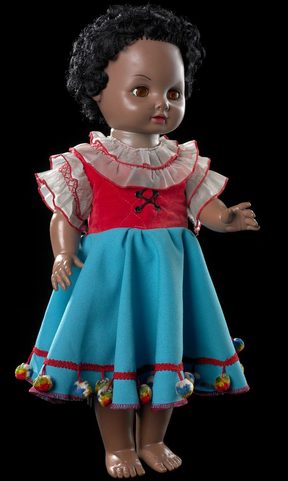 Play School began in New Zealand in 1972, a knock-off from the BBC, but it came at a time when New Zealand was changing, and the way our hosts talked, acted and played with those dolls reflected those changes.

Actor and one-time Play School host Theresa Healey recalls that when she worked on the programme in the 1980s "we were getting away from the British, about being a New Zealand voice. Because in the show, it always used to make me laugh, we'd go through the window - it was always these  - you'd go through to the Thames. If we were talking about rivers we'd go to the Thames... And it as like - we've got so many amazing things here, why aren't we using New Zealand stuff?"

Humpty, Jemima, and the Teds all derived from the British series that started in 1964. Humpty, Healey especially recalls as "just gorgeous... round and cuddly".

But the dolls didn't always cooperate. "They never quite did what you wanted them to do. You'd be putting them in the boat, because you were going boating and one would fall over."

But we also got one of the earliest indigenous characters on New Zealand television - the doll Manu.

"For Manu," says Ross, "we do have a piupiu and a feather cloak as well, because she's a Maori doll she would wear those for special events. And Manu was what made New Zealand's Play School quite special."

Working with those dolls, Healey knew her place.

"They were the stars of the show... they were telling the stories and that's what the kids identified with."

But the programme's producers weren't always focused 100% on the kids.

"I remember the producer saying 'wear cute stuff'. And I'm going - 'we're doing it for kids... and he was like, no, actually there is another demographic that we are performing to. And I was like, who? Kids and their mothers. He said, no, unemployed men. I was like 'Whaaaat?!'"