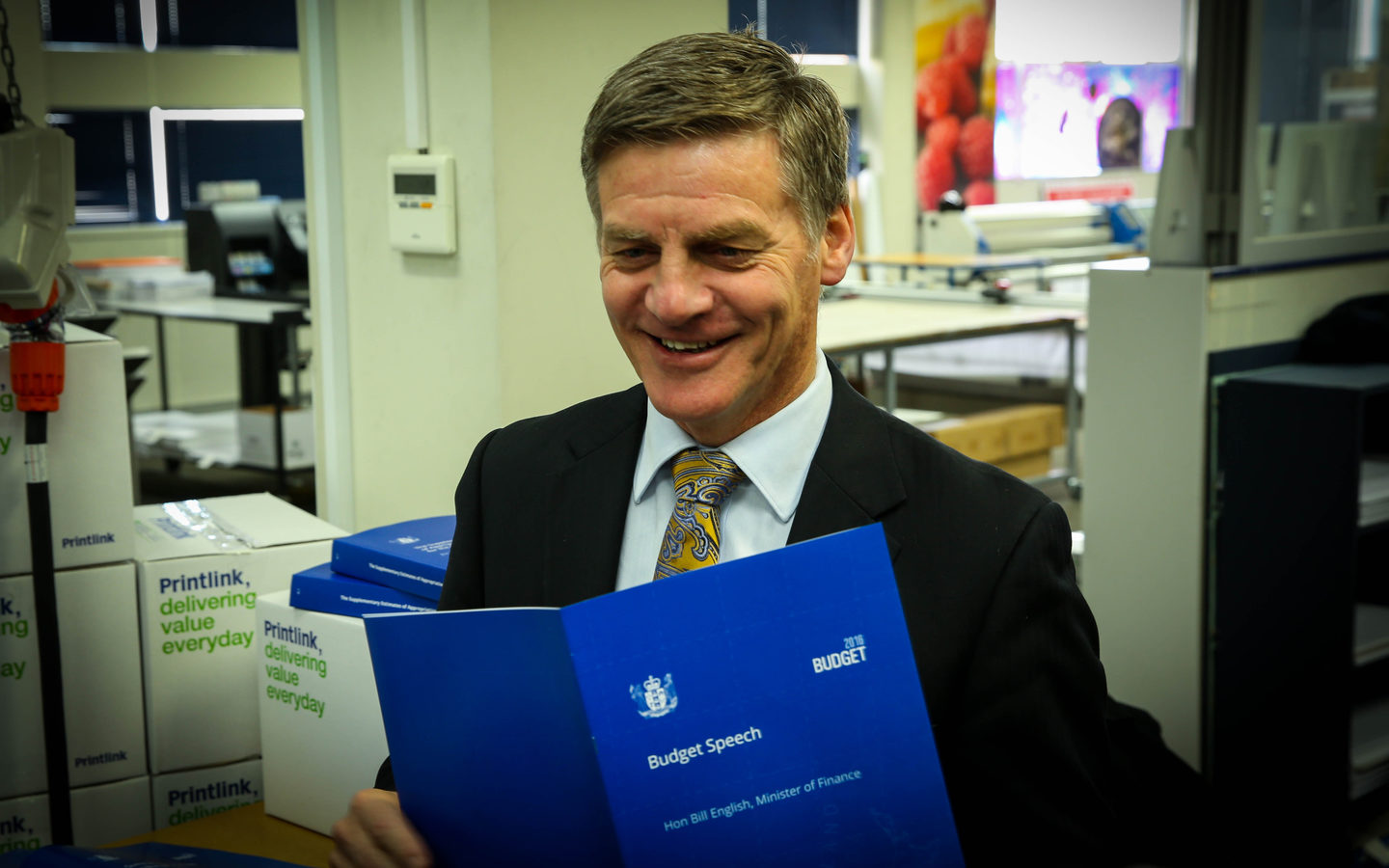 But the winds were rapidly shifting, with the financial crisis already engulfing the globe. Within months of the election, New Zealand's own economy contracted, joblessness rose and deficits ballooned.

Yet New Zealand managed to avoid the worse of the fallout. Even the devastating 2011 Christchurch earthquake failed to stall the steady economic recovery.

Employment has grown, incomes have risen, and the government has recently returned the books to surplus.

The economy began contracting at the end of 2008 before recovering from 2010 Photo: Source: Treasury

National likes to present itself as the best manager of the economy, compared with parties like Labour and the Greens.

Structural problems persist, though. Inequality has edged up, particularly when housing costs are included. Women earn less, and Māori and Pasifika have higher unemployment rates.

The economy contracted 0.1 percent at the end of 2008. Throughout 2009, as the financial crisis continued to bite, gross domestic product (GDP), a broad measure of the country’s health, continued to shrink before beginning a steady recovery from 2010.

As of March 2017, annual economic growth was 3 percent.

Growth in that time has partly been driven by China's increasing demand for dairy, while the Christchurch rebuild boosted the fortunes of the construction and manufacturing sectors.

The risk of New Zealand’s reliance on dairy was starkly demonstrated when dairy prices took a dive in 2015. The industry itself estimated that by 2016, the value of dairy exports to New Zealand’s economy had halved since the peak of the 2013/2014 season.

Prices are now recovering after two seasons of low pay-outs, though dairy farmers are concentrating on reducing debt from record levels.

While dairy took a hit, the economy was held up by tourism and construction.

The future picture for tourism numbers is very upbeat – government officials say if the current situation continues, international visitors will increase by about 50 percent by 2023, and spend $15 billion a year.

But there are fishhooks – that money includes spending from international students, and major problems with false visas and low quality courses have been identified in that sector.

There are also questions about whether the industry and regions can cope with the predicted 2.5 million people from overseas expected to visit New Zealand each year by 2023.

Construction, largely driven by low interest rates, the rising population and Canterbury rebuild, has provided a large number of jobs in the past five years. Building activity has peaked in Canterbury and will continue to tail off, but strong demand for new houses in Auckland is going to keep the industry pumping along for some years to come. 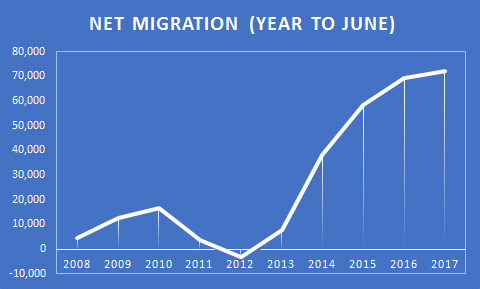 Treasury is predicting 'stronger for longer' migration, expected to add 212,000 people to New Zealand’s population over the next four years.

The rising figures have created a deep political divide about whether high net migration is a good thing for New Zealand.

The government argues it’s a sign of success as the strong economy has attracted New Zealanders living overseas to return home, and persuaded those living here not to flee offshore in pursuit of better opportunities.

A stumbling global economy also made New Zealand a beacon for international immigrants.

While that growth is helping drive the economy, critics argue it puts more pressure on the housing and infrastructure, while keeping wages down.

In 2013, Statistics NZ began recording arrivals according to visa type. That has revealed a steady increase in work, residence and student visas, alongside New Zealanders and Australian citizens, who are categorised in the same way.

The government insists New Zealand is well-equipped to deal with the burgeoning population in future years - a claim forcefully questioned by many other parties in parliament. 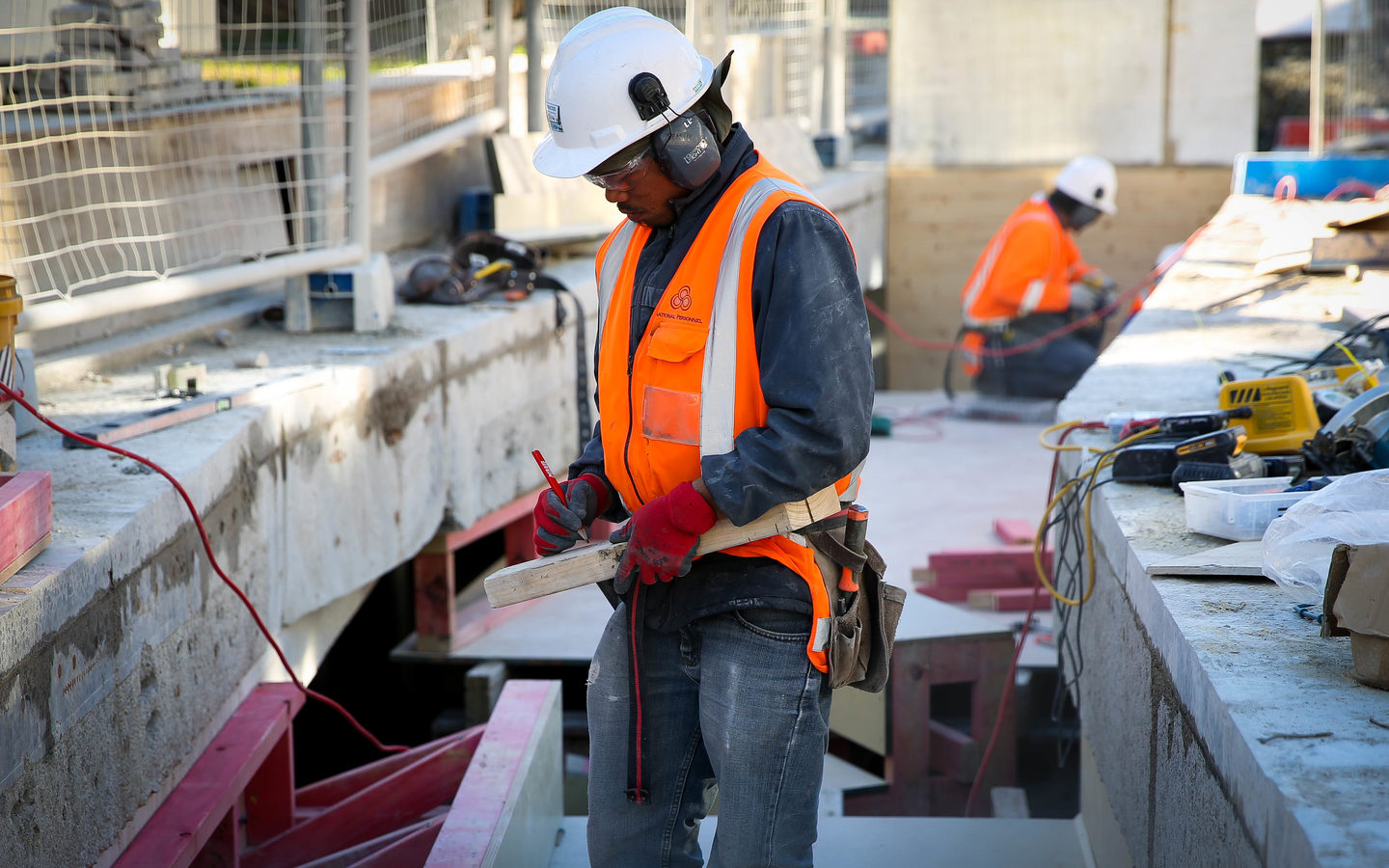 In debt and out of a job

While the government is now forecasting substantial surpluses in the coming years, the level of government debt has risen.

The government inherited debt of $10.2bn, but borrowed heavily in subsequent years to cope with the global financial crisis and the Canterbury earthquake rebuild. Debt is now $61.8bn - six times what it was.

With net debt around 22 percent of GDP and close to the government’s initial goal of 20 percent, the newly-minted Finance Minister Steven Joyce has reset the target to get debt down to 15 percent of GDP or less by 2025.

However, the government also stopped contributions to the New Zealand Superannuation Fund, and pared back significantly on increases to public spending that had been signaled by the outgoing Labour government.

National has flagged much higher levels of public service and infrastructure investment, but will not resume Super Fund payments until 2021.

More worryingly, household debt has soared to a record high. The debt to income ratio stands at 167 percent, up from its previous peak of 159 percent in 2009, leaving people vulnerable if the economy takes a turn for the worse.

In 2008 the unemployment rate stood at 4.2 percent, but as the global financial crisis intensified, that rose to 6.1 percent the following year and peaked at 6.9 percent in 2012.

The unemployment rate has been falling for several years Photo: Source: Treasury

Since then the number have gradually improved. The rate now sits at about 5 percent, and is predicted to plateau out at 4 percent.

However, below the headline unemployment figures is a different story – one about the number of people existing on part-time or casual work.

One in ten people employed in New Zealand was in a temporary job, according to a 2016 Statistics NZ report. That included part-time, casual or seasonal employment.

Unsurprisingly, unions in New Zealand have been very focused on what they see as a rise in 'insecure work' and the financial and social effects of that.

A 2013 Council of Trade Unions report acknowledged that as workplaces and technology evolve, temporary or flexible employment works very well for some, but leaves many feeling they are “not wanted, not valued” and without the security of a regular pay packet.

Despite the stronger economy, wage growth remains modest by past standards. Average hourly earnings were $23 in December 2008, rising to $27.80 by December last year.

Similar slow growth is predicted for the future, averaging about 2 percent each year in the next five years.

As the election draws closer there are also potential risks to the economy, as identified by the Treasury: a lower tax take depending on economic conditions, and pressure on the government to spend more on health and education as a result of a growing population.

While the government did usher New Zealand through the financial crisis, it came at the cost of Super Fund contributions and a certain level of public sector investment. It also copped criticism for delivering a tax cut package, accompanied by a GST increase, in 2010, from opponents who argue they were unaffordable.

Similar arguments will play out in the 2017 election, with National and Labour already staking out their economic positions.

Both parties are promising packages to boost family incomes through extra targeted entitlements.