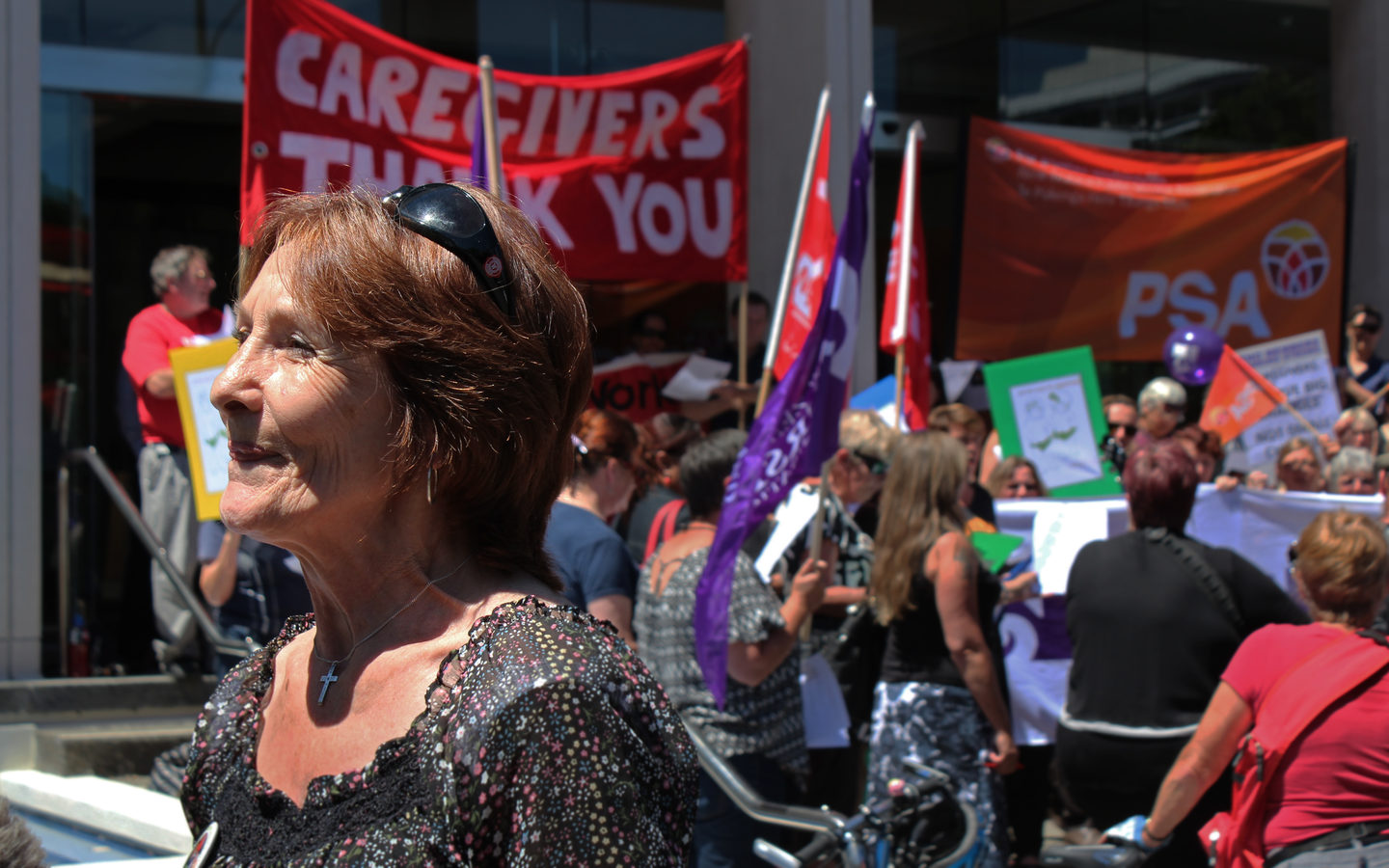 It’s going to be a good pay-day for Maryanne Bishop this month.

She’s worked in the aged care sector for most of her life, and at the same rest home in Wellington for more than 20 years.

“I think I’m going to get five dollars an hour, which is a big pay rise. When you add that up over a forty hour week, that’s $200 gross.” 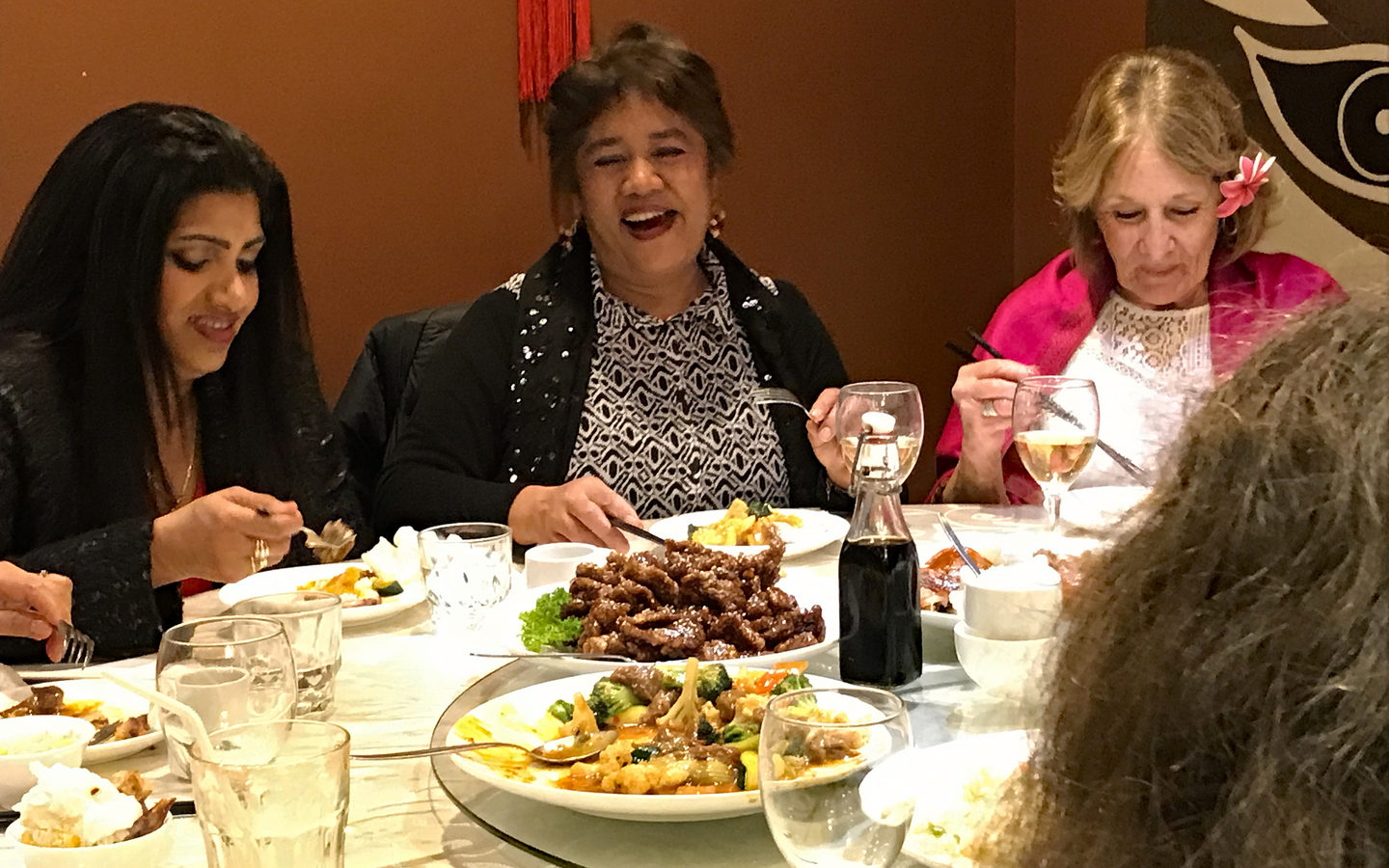 At the moment she just manages to pay her mortgage.

“It doesn’t allow me to do any work on the house. I have to save for a long time to do anything like that.”

Her big extravagance? New glasses, to replace a 10-year-old pair.

This month 55,000 care and support workers get their first pay packets with their hard-won pay rises.

The mainly female workforce argued through three courts and a year of tough negotiations to get pay increases ranging from 15 to 49 percent.

A few weeks ago, over a meal of orange beef and roast duck at a Petone restaurant, some of those workers celebrated what a difference those increases will make to their lives.

Ms Bishop is thankful to the government for stepping up.

“But I don’t think the government would have done it without the [court] case … because we’ve gone to government plenty of times, and said that we need the funding increased and it hasn’t got it anywhere.”

For Sa Naidu, who has worked at a home in Karori for seven years, the celebration was about the government valuing and respecting they work she and her colleagues do.

“If [our patients] need us, if that bell rings, we are there for them. We value them, but the government doesn’t value us.

“But now, it’s been recognised. And I put my hat off to the government.”

Simone O’Connor is a senior healthcare assistant in Masterton. She’s been in the industry for seven years, but has colleagues who have been on minimum wage for decades.

“This is creating a new career path, that’s how I see it ... We finally get valued for the work we are doing.”

She and her fellow workers will go to work with a much more positive feeling now, she says. 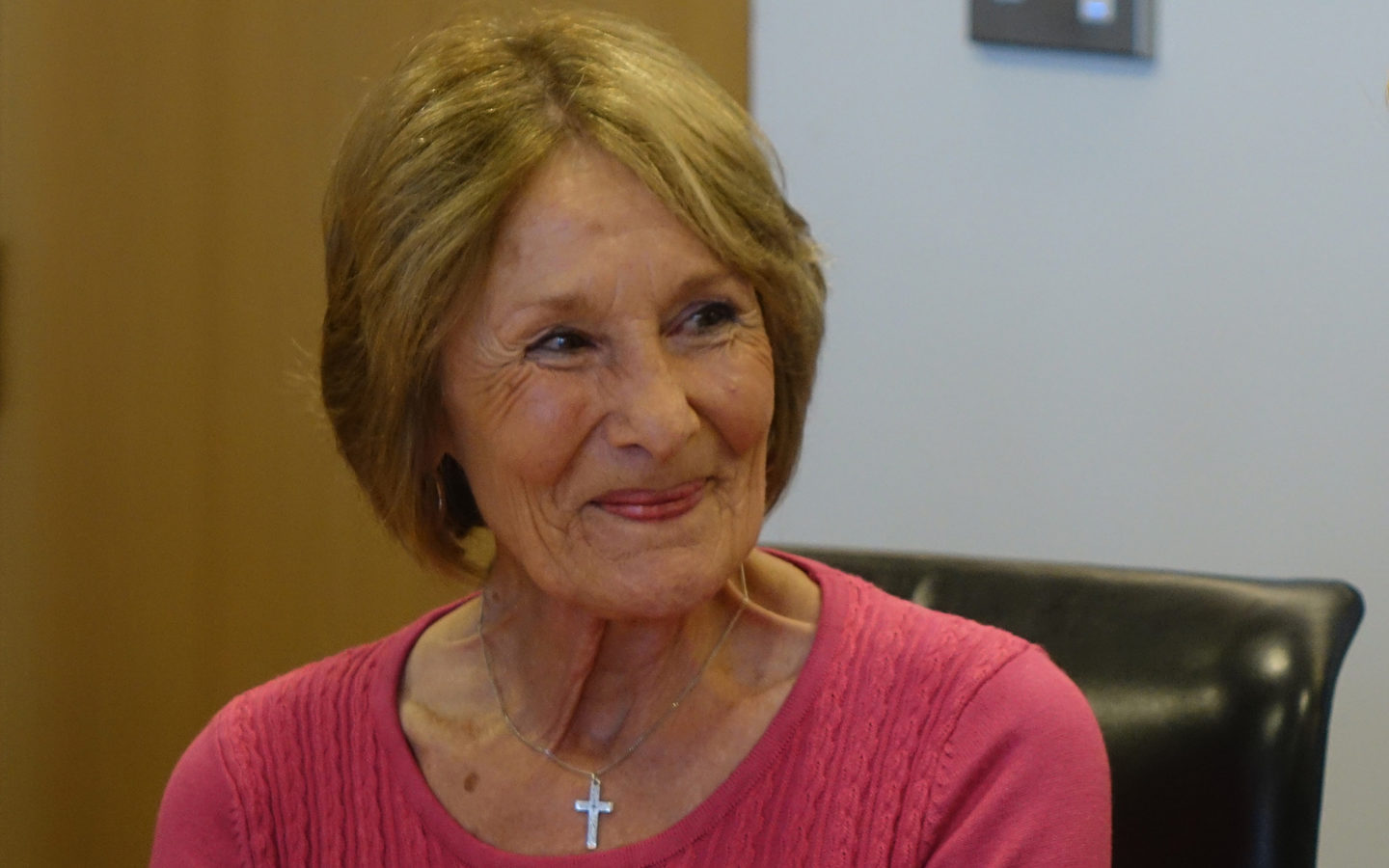 The women at the table look to one person - Kristine Bartlett, who took the case on behalf of all care workers, and fought for five years.

She talks about one of her first jobs, in the public bar of a hotel. “When I walked in the man said, ‘You can’t do what I am doing.”

“That’s what’s more important to me. The recognition. We’re not stupid. Women can do anything ... If I have to dig up concrete, I’ll dig it up. And we need to be recognised for that sort of thing.”

The $2 billion pay equity settlement, signed in April this year, is arguably one of the biggest achievements in gender equality since the National-led government came to power.

But the government's record on the issue has been otherwise patchy.

One of the first things it did after it was first elected in 2008 was to scrap the Labour Department's pay and employment equity unit. It has since established a joint working group on pay equity principles.

The gains that had been made in the gender pay gap have stalled.

The figure is worse for Pasifika and Māori women - the gap between Pākehā men and Pasifika women is nearly 30 percent.

For Equal Opportunities Commissioner Jackie Blue, who was one of National's MPs for six of the years the party's been in power, that's not really good enough.

“Women’s work has been systematically undervalued - It’s the type of work they are going into, it’s the fact they pay a high price for being parents and taking time off work.”

Little progress has been made on closing the gap between men and women's wages in the last few years Photo: FigureNZ

The Ministry for Women this year did a large study to try to figure out what is behind the gender pay gap.

The study found 80 percent of the gap is down to unconscious and conscious bias, and differences in behaviours and choices between women and men.

At the current rate, it will take New Zealand 30 to 40 years to get to a zero wage gap, Dr Blue says.

One of her recommendations is that businesses should have to publish their statistics.

“Basically for a CEO to say, ‘Let’s measure the gender pay gap,’ and be alarmed by what they see, hopefully; for them to reduce it means they have to have to do a deep dive into why it happens.”

'There are women there'

From next year, companies in the UK with more than 250 employees will have to publish their gender pay gap and bonus gaps. Australia has had similar rules since 2012.

But some companies aren't waiting for the government to take the lead.

ANZ Bank has a zero percent pay gap and 40 percent of the company's managers are women.

Human resources general manager Felicity Evans is aiming for a 50-50 split and has put in place some tough rules to make that happen.

Each interviewing panel at ANZ must include men and women, and both genders must also feature on the shortlist for every job.

"You’ve got to make sure your pipeline of candidates is right and that’s why we’re forcing people to go out and find them," Ms Evans says.

“Because there are women there. They’re fifty percent of the population. They are there.” 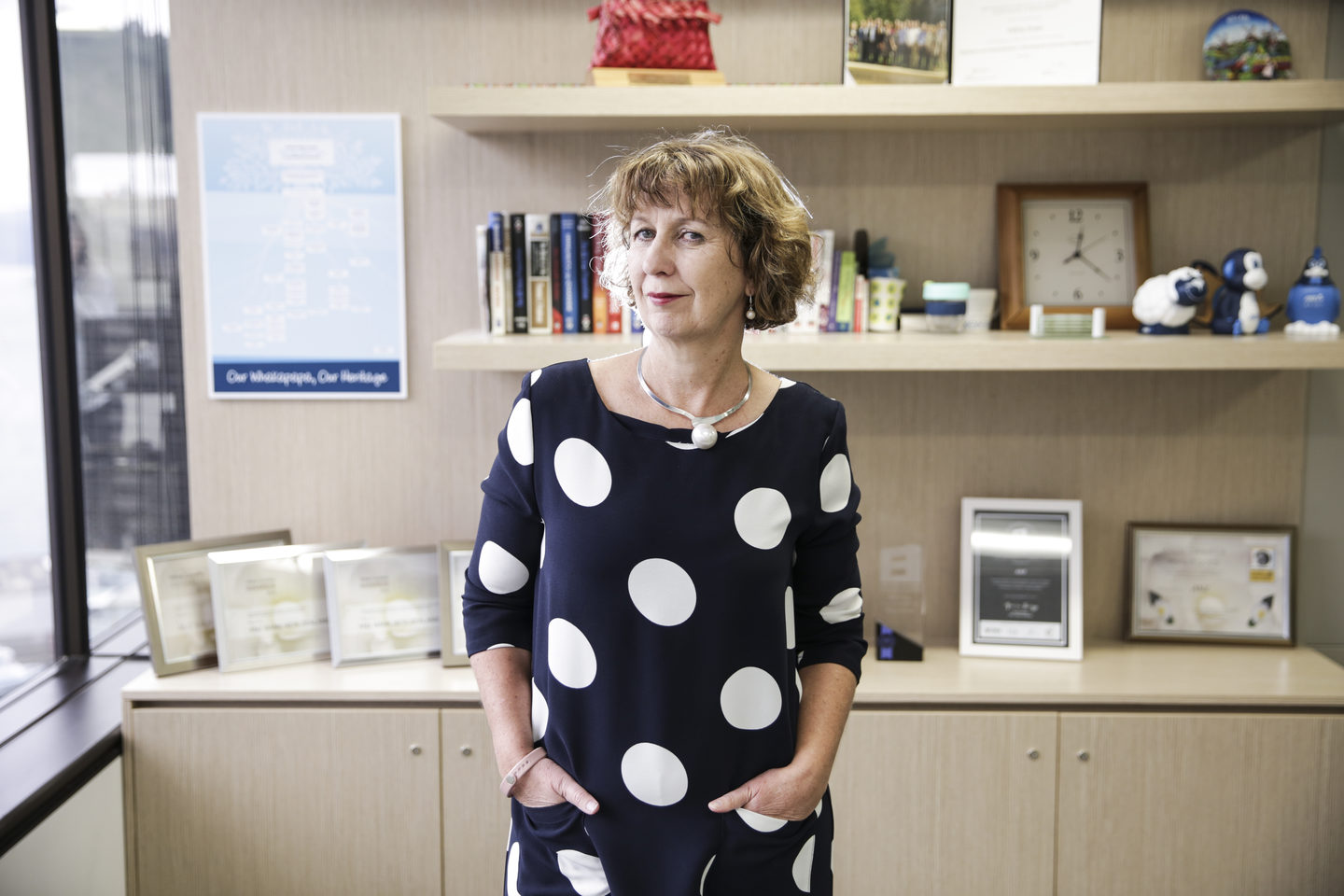 The bank also allows every job to be flexible, offers 18 weeks paid parental leave and two weeks' family leave to both mothers and fathers, and also pays the employer contribution on superannuation during parental leave.

She is wary about publishing wage data publicly.

“There are so many nuances that I get a bit nervous about the way people measure and the way people compare ... It’s easy to be cute and show that you’ve got no gender pay gap, or that you’ve got a really bad one.”Publishing the numbers of women in management could however help to attract more - and better - candidates for jobs, she says. 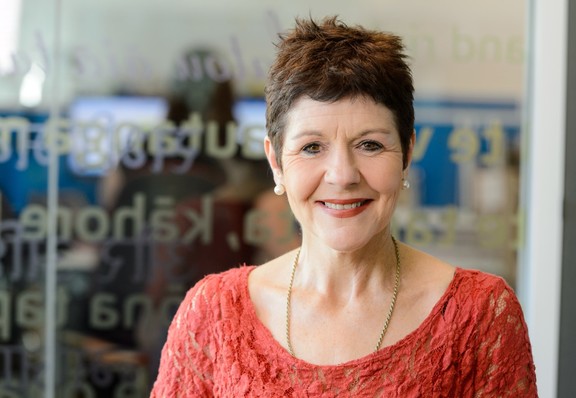 Jackie Blue says the care workers’ settlement will lead to pay increases for other low-paid women too.

“Ultimately, paying people better wages pays off in greater productivity, better retention of staff and so forth.”

But are women better off than they were in 2008?

Possibly not, though there have been some improvements, Dr Blue says.

“As far as the labour market metrics go, there have been slight improvements. There are some areas that are of concern, like Māori women’s under-employment, which is going up, not going down.”

Kristine Bartlett is adamant the fight was worth it.

“I never ever wavered. I knew that it was the right thing to do. To stand up.

“You’ve got to be positive, and believe in yourself and put it out there. And we’ve done it.”