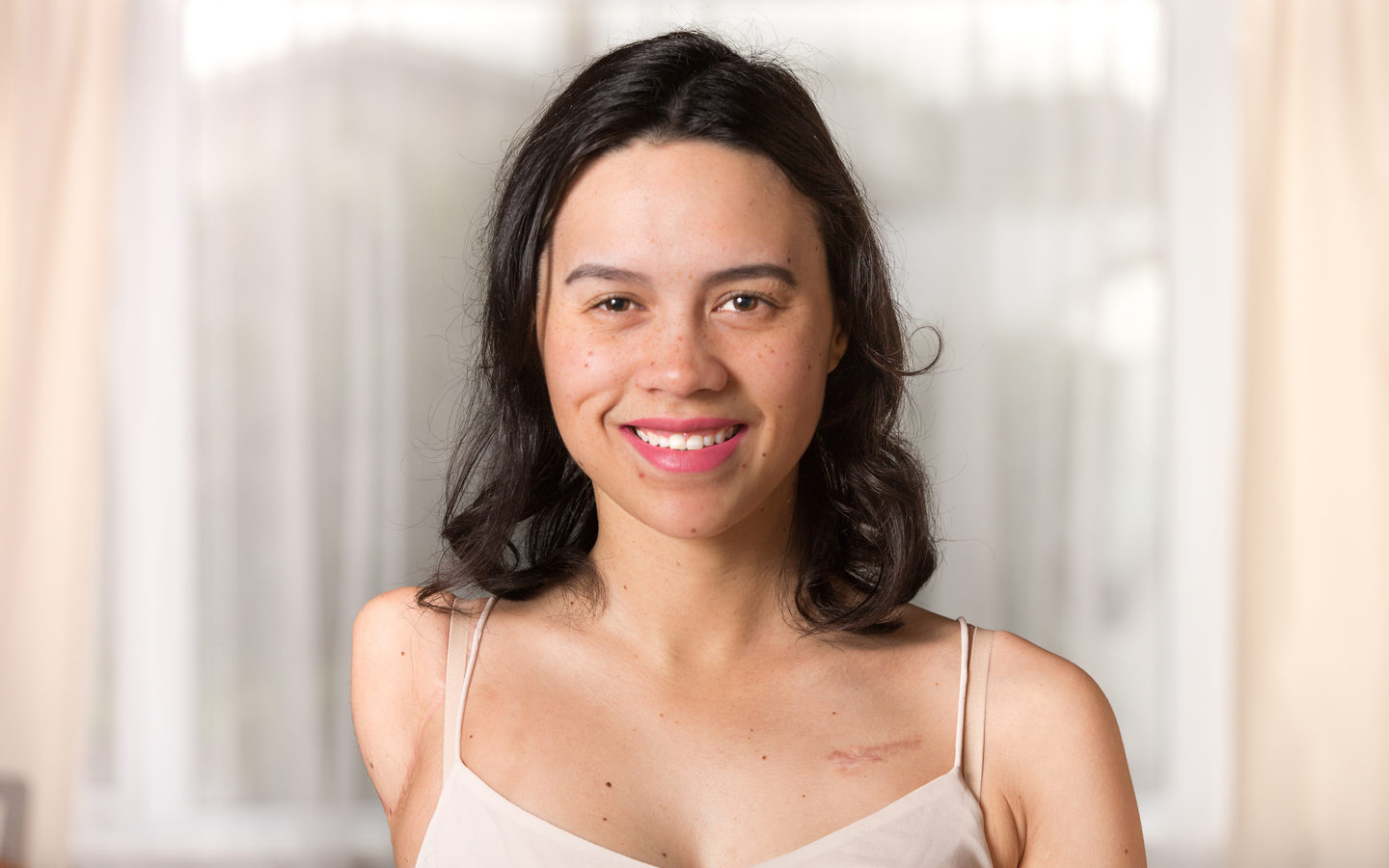 Bryall McPherson was aged 19 and a rising tennis star when she went to serve during a game in 2008.

With no warning that anything was amiss, she threw the ball into the air and - without any other contact occurring - broke her right arm.

"Really tough" chemo knocked Bryall's weight down from 65kg to 43kg over the next five brutal days.

When things couldn't get much harder she was told she had a fifty-fifty chance of surviving if she kept her arm, but a 95 percent chance if it was amputated.

"I just thought to myself, this is a life or death situation, I'm not going to play Russian Roulette here. Take the arm off."

Both the rate of diagnosis and the rate of death form cancer have actually dropped since 2009 - a continuation of a trend that began in the late 1990s. 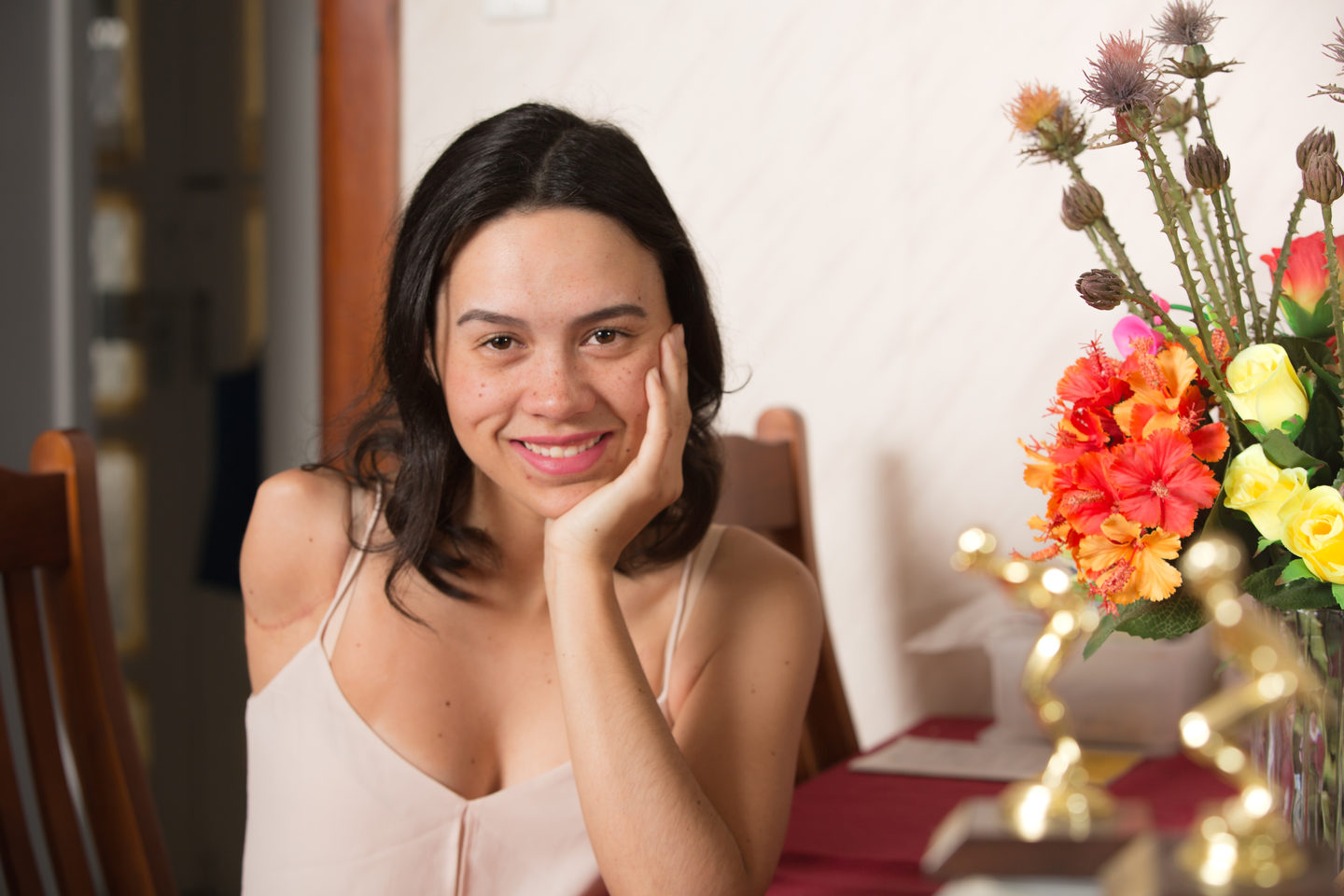 Bryall McPherson's arm was amputated when she was 19 after she was diagnosed with bone cancer. Photo: RNZ / Claire Eastham-Farrelly

But the overall number of people with cancer has continued to grow, as the population increases and ages.

Three thousand more people were diagnosed in 2014 than in 2009 - an extra 3000 families grappling with the consequences; an extra 3000 patients needing treatment through an already-stretched health system.

And the answer to whether someone has a better chance of surviving now, compared to when National first came to power, is a complicated mix of what type of cancer it is, when it was diagnosed, and what access there is to drugs and other treatment.

Bryall considers herself "one of the lucky ones".

It was a no-brainer to lose her arm, she says.

An only child, she wanted to protect her parents from the anguish of losing a child.

"In that instant when I saw them crying, bawling their eyes out, I just thought to myself, 'I have to fight this.'"

These days Bryall is a member of the New Zealand Paralympic swimming team, dances hip-hop, umpires tennis and is studying.

She's also an advocate for faster access to drugs, saying if she'd been diagnosed in the US, she'd have had a 17 percent better chance of survival because of the treatments available there.

In the meantime, she's using her experience to help other young people, urging them to get any persistent "growing pains" checked out and, if diagnosed with cancer, to accept all the help and support offered.

'This is a major emergency'

Bryall's bone cancer is relatively uncommon - lung cancer is still the country's deadliest cancer. It killed 1656 people in 2013; one in six of all cancer deaths.

But close behind is bowel cancer, which was the cause of death for 1252 people that same year.

Unlike many other cancers, the number of bowel cancer cases has risen dramatically between 2008 and 2016, increasing by 15 percent among men and 19 percent among women.

After many years of pressure from doctors and patients, a nationwide bowel cancer screening programme will start rolling out in July after the government committed $39m of funding.

It will come too late for Hamilton man Chris Woodcock, 51, who is receiving hospice care for bowel cancer.

Mr Woodcock's cancer was discovered late, when it had already advanced to stage four.

"We were pretty busy at work so I'd lost a little bit of weight but I just put that down to working long hours," he says. He'd also passed blood, but believed that was due to piles. 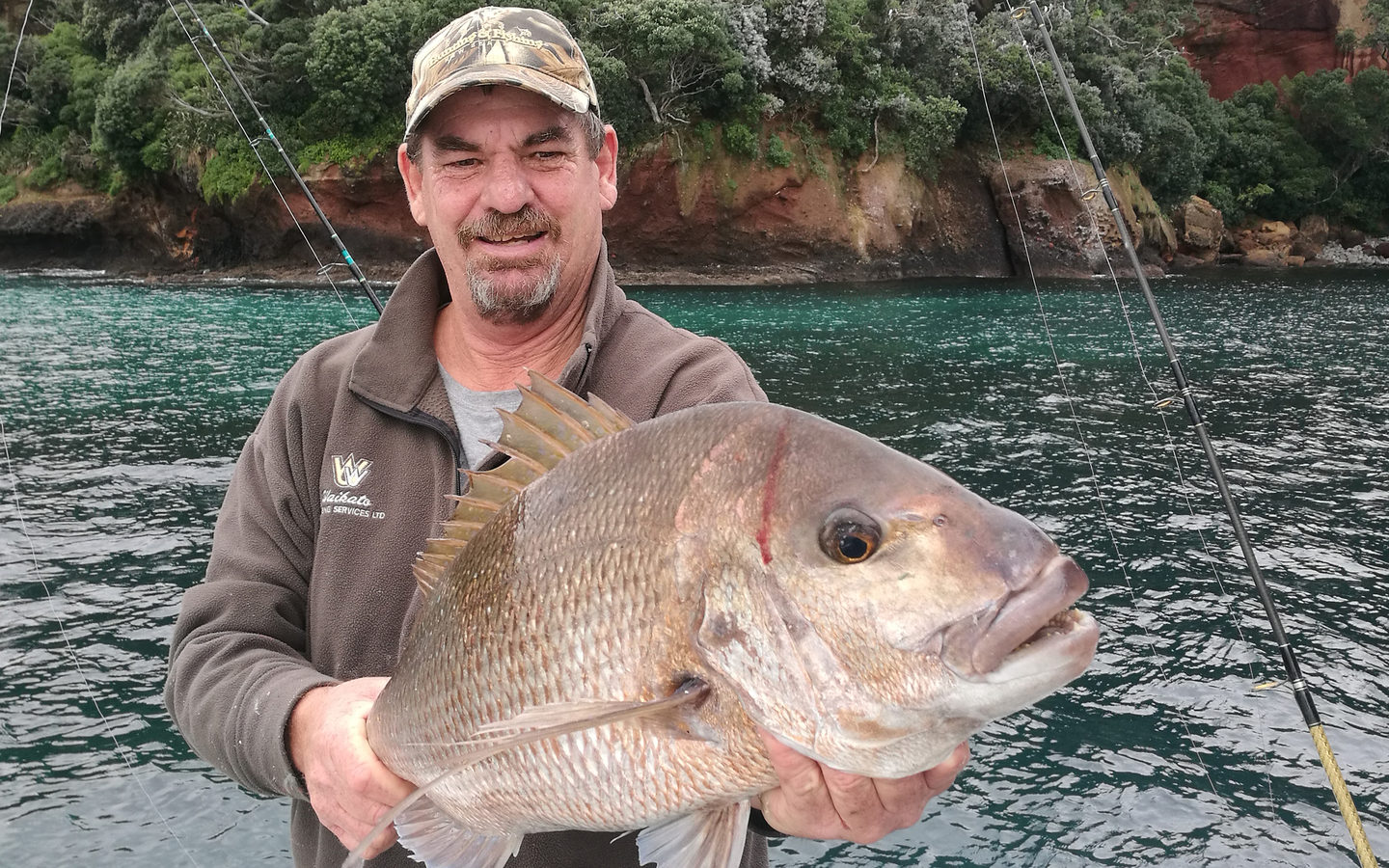 Before long, the cancer had spread to his liver, requiring chemotherapy, radiotherapy and surgery throughout 2015 - a year he recalls as "a blur".

He is receiving chemotherapy again after the cancer spread further, to the base of his spine.

His father died of bowel cancer, something Mr Woodcock didn't find out until later.

"There is a big lack of awareness...Every couple of years [I] would have a prostate test and a medical, and you give blood and just presume that you're being tested for everything, but you're not."

He's pleased national screening is beginning but disappointed it'll be restricted to those 60 to 74 - unlike the pilot programme at Waitematā District Health Board, which offered screening from age 50.

Southern DHB oncologist Chris Jackson says people he treats are "extraordinarily frustrated" it has taken this long to fund a national programme.

"I meet people every week who could have had their cancer detected at an earlier point by bowel cancer screening, so people are pretty upset about this."

New Zealand now has one of the highest bowel cancer rates in the world, and the female rate is higher than any other country, Dr Jackson says.

"This is a major emergency."

As well as the bowel cancer screening programme, immunotherapy drugs Keytruda and Opdivo are among other new treatments and initiatives funded in the last few years - both providing a much-needed effective treatment for advanced melanoma. 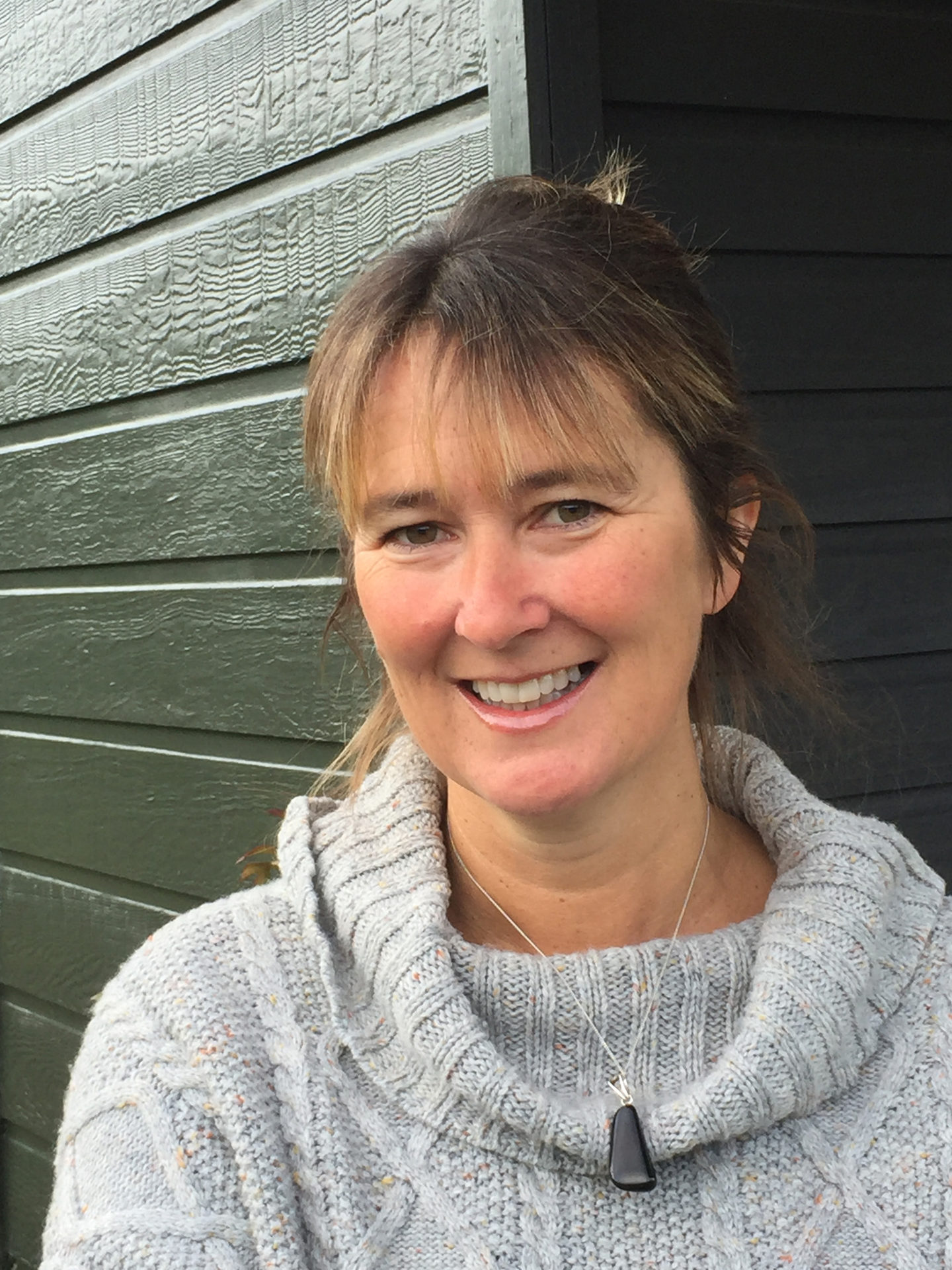 Kate Hodges has been granted compassionate access to a life-prolonging drug, Tagrisso, that is not funded in New Zealand Photo: Supplied / Kate Hodges

In the absence of a fail-proof cure for cancer, though, increased survival - measured in years - is the focus.

Kate Hodges was otherwise well when she went to the doctor about a lump in her neck in 2016.

Within a fortnight, though, the Hanmer mother-of-two was diagnosed with an advanced, aggressive lung cancer - and was granted compassionate access to the drug Tagrisso, which isn't currently funded in New Zealand.

Within a week of starting the tablets, the lump began going down and that progress has continued.

"If you passed me in the street, spent the day with me, you wouldn't think there was anything wrong with me."

The trajectory has been surreal, she says: being diagnosed, expecting to live a year, and to feel "quite good" a year later.

She has children aged 10 and 12 and is using the extra time her treatment has given her to prepare them for what's to come.

"I'm not naive. These tablets are not going to cure my cancer. They are just prolonging my life and luckily with a very good quality of life," she says.

"But eventually these tablets will cease to work because the cancer will get round them, and that is when the unknown happens."

She and her father, a retired doctor in Britain, are both amazed by the high standard of care she's had in New Zealand.

"Certainly the access I had to my initial drug and then the second drug that I'm on now has been incredibly fast."

* Figures are the most recent published by the Health Ministry