Brighter Future? Beyond 9 to 5 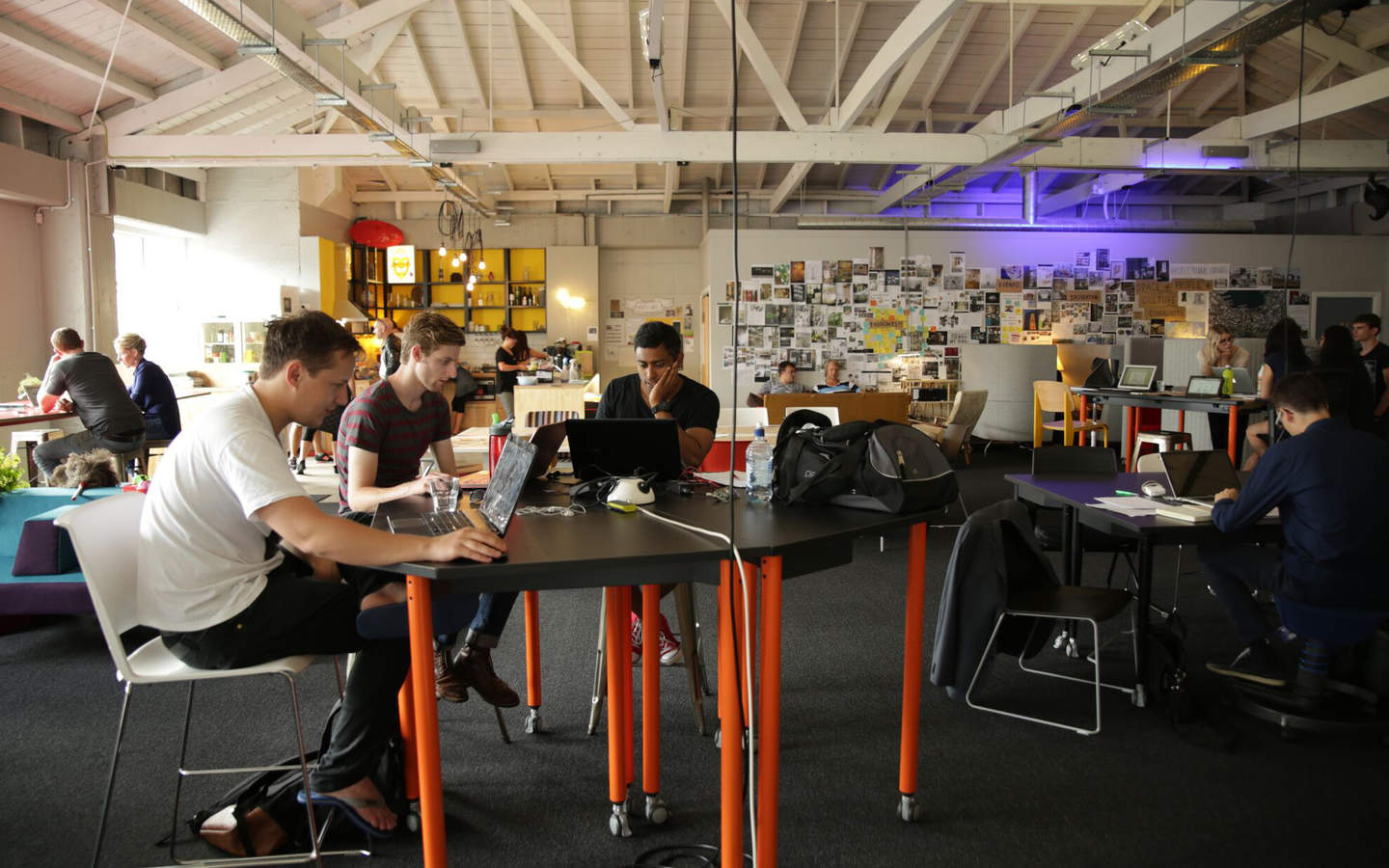 Clatter up a set of stairs in a low-rise, boxy building on the corner of Tory Street in Wellington, and you'll find BizDojo.

None of the people bending over laptops or meeting in small groups are employed by BizDojo - instead, it offers space for freelancers, self-employed workers and anyone else who needs a spot to work in. 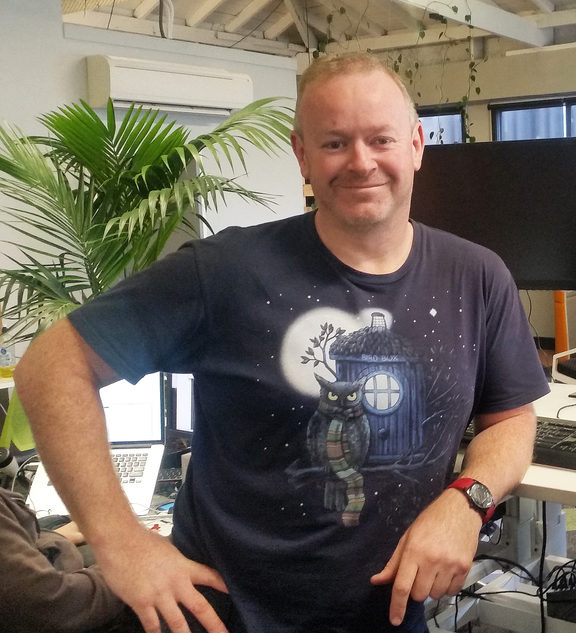 Dave Guerin has been self-employed for about 20 years. Photo: RNZ / Jacob McSweeny

Among them are Dave Guerin and his partner, Pauline La Rooy, who run a tertiary education news service.

"We just hire a desk. We've got a desk each, that gives us essentially what we need, which is power, a workspace, wifi, heating, and free coffee - which is important," Mr Guerin says.

The couple are just two of more than 300,000 people who are now self-employed (without employees of their own) in New Zealand.

Even without that latest jump, the total had risen by 19 percent by the end of last year, compared to a 14 percent increase in the overall workforce.

Dave Guerin says because he and Ms La Rooy don't need a lot, they can work almost anywhere.

With their son in tow, they put that to the test on a 10-month overseas trip last year, which made for some interesting office locations.

"One of my favourite times was getting some work done in the morning, heading off around lunchtime to a reef in the Bahamas and snorkelling round the reef, then coming back and sitting down for half an hour to finish it off on the beach and send it off to clients," Mr Guerin says.

Census figures show more people are working from home, too, and the latest labour figures show the number of people in part-time employment has also been increasing. 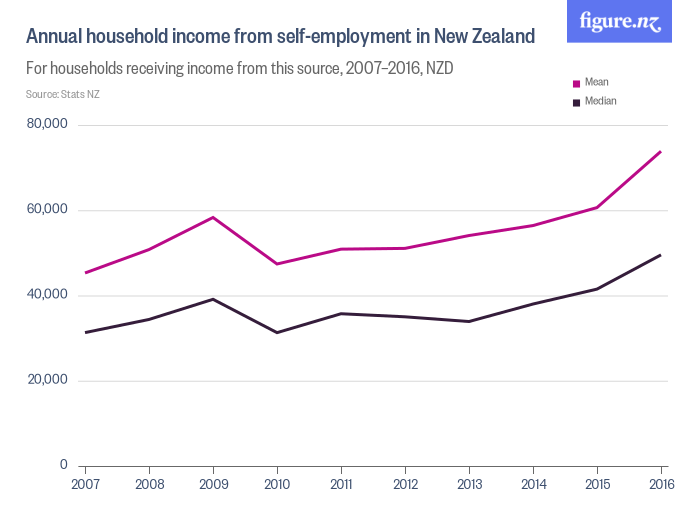 While an increasing number of people have been able to take advantage of flexible working hours and conditions, the last three political terms have not been easy ones for many workers.

The year National was elected, 2008, was also the year the global financial crisis hit.

That blunted the economy in the ensuing years, with flow-on effects to government spending, debt, economic growth - and employment. 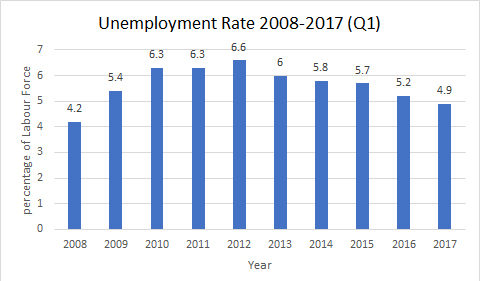 The unemployment has dropped from a peak of 6.6 percent in 2012, but remains higher than it was prior to National's election. Photo: RNZ / Statistics NZ

One of the first major changes to employment law made under National was the introduction of the 90-day work trial in 2009 for companies with fewer than 20 employees.

Despite union opposition, the government argued the change would encourage companies to take on employees they would otherwise view as too risky.

However, a 2016 Treasury report found no evidence the policy had encouraged firms to hire more people or more disadvantaged job seekers - but nor did it find evidence that firms were exploiting the law to fire people after 90 days.

There was also a significant employment law change in 2014, which made changes to provisions relating to flexible working hours, meal breaks, the transfer of employee entitlements and information to new employers, good faith and collective bargaining.

While Dave Guerin has been self-employed for about 20 years, Auckland publicist Josie Campbell only decided about a year-and-a-half ago to start working for herself.

Ms Campbell has her own business but keeps a part-time job as a bit of extra security.

"[It means] I'm not looking for constant income and I'm able to work with a few clients and then a few interesting things that come up.

"I haven't had to spend time freaking out about finding clients."

She has set up her spare room in her two-bedroom unit in west Auckland as an office. She works from home a couple of days a week and goes into the city to meet with clients and media, scoping out the best cafes with free wifi.

The transition has been challenging, Ms Campbell says.

"It's quite stressful going from being an employee for 20 years to becoming someone who has to manage both workflow and cashflow ... when you don't know when people are going to pay you sometimes." 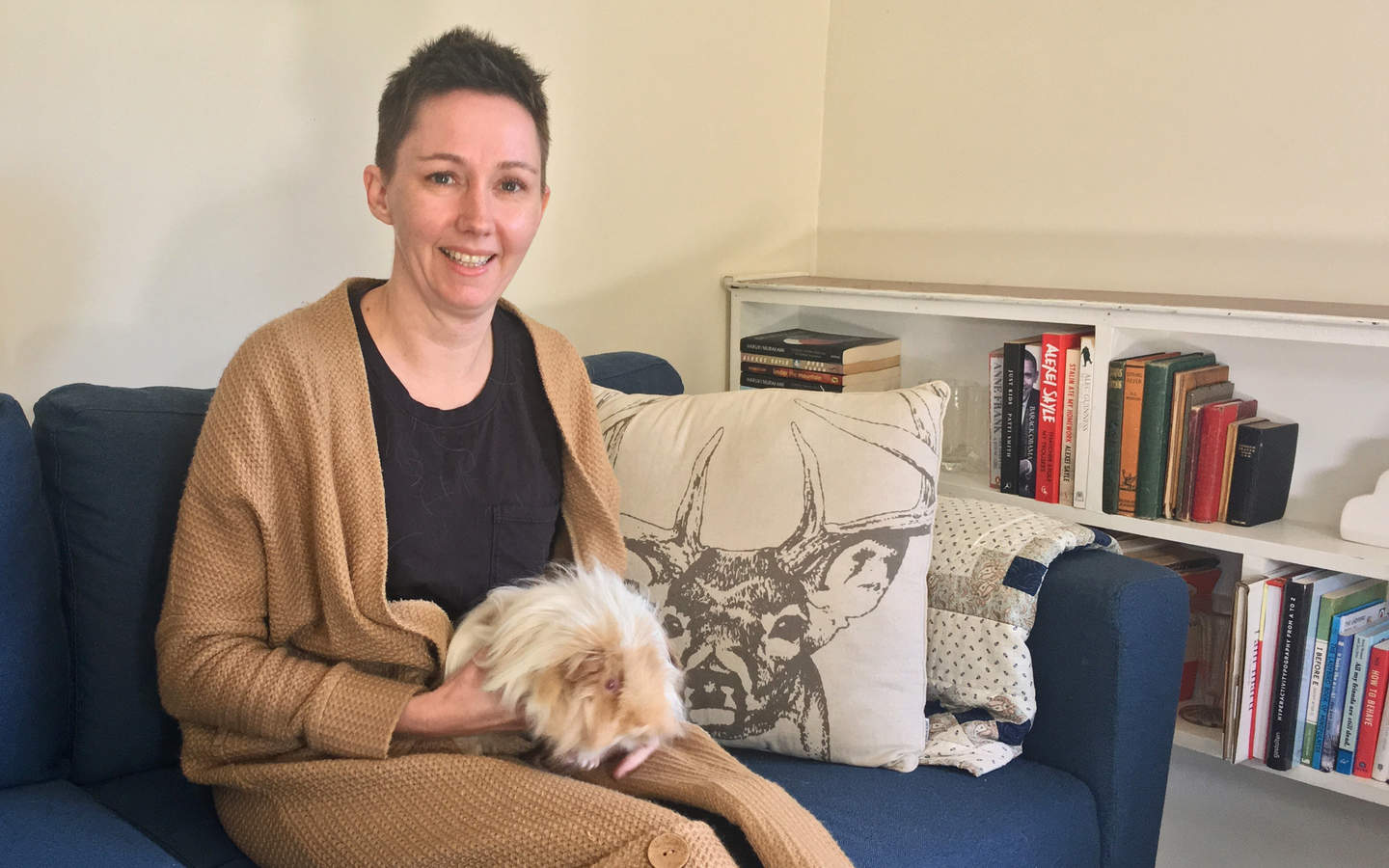 Working from home isn't just an option for people who are self-employed.

Nicole Yee lives in Carterton, in the Wairarapa, with her husband and young children.

For the last seven years she's been working part-time from home for accounting software company Xero.

It's a "great lifestyle", she says.

"You can hear the cows mooing down the road and we've got a big section - we've got chickens - the front lawn's huge so the kids are always out there playing rugby."

She works 20 hours a week, mostly in the evenings, as part of the customer support technical team.

"Everything we do is online so I just log in in the evenings, answer customer emails, and then log off at night and that's me done."

Nicole Yee's husband is a joiner and she says their work schedules fit in with their family life.

"It means that we don't have to worry about day care for our kids - I can do the mum jobs all during the day and then my husband gets home from work and I start working in the evenings."

Ms Yee heads over the hill to Xero's Wellington office every so often, and her team has weekly video meetings that she dials into.

With technology allowing workers to log on from almost anywhere, with access to everything they need, a growing number of people could do their jobs like she does, she says.

Self-employed with no employees