NSW has recorded 22 new community cases of Covid-19 since the state government gave its most recent update yesterday. 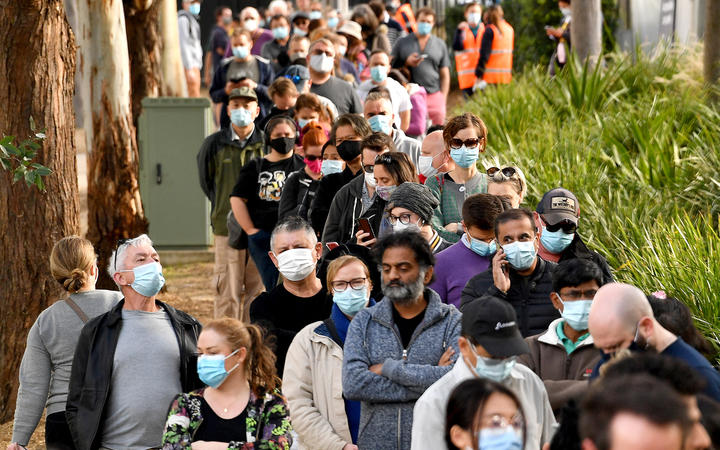 There are now 65 cases linked to the Bondi cluster.

NSW Premier Gladys Berejiklian has announced people who live in, or have worked in four Sydney local government areas in the past two weeks, will be locked down from 11.59pm (NSW time) on Friday.

"In the four local government council areas of Woollahra, Waverley, Randwick and the City of Sydney - if you live or work in those local government areas, you need to stay at home unless absolutely necessary," she said.

"The advice from Health is we don't want to see this situation linger for weeks.

"We would like to see this situation end sooner rather than later.

"Please know that this is in order for us to ensure that this doesn't take a hold for weeks and weeks and we believe this is a proportionate response to the risk."

The Premier said contact tracers had overnight been able to link all but one infection to a known case or cluster.

Last night, New Zealand announced the suspension to the quarantine-free travel bubble with NSW would be extended because of the state's outbreak.

Health officials will review the decision late next week.

As NSW public health officials continue to add new locations of interest, travellers from the state to New Zealand and who have been at a location of interest at the specified time, should call Healthline on 0800 358 5453, get tested and self-isolate until they return a negative result.

Queensland has recorded two new cases of community transmission of Covid-19 linked to a cluster stemming from a leak from hotel quarantine last weekend.

Both of today's infections were close contacts related to the Portuguese Family Centre in Ellen Grove in Brisbane's south-west.

Chief Health Officer Jeannette Young said they were in quarantine during their infectious period, so not a risk to the public.

Dr Young said anyone who was at the DFO near Brisbane Airport between 4pm and 4.30pm on Saturday (Queensland time) who has not been tested should do so as a precaution.

"Even if you do not have any symptoms so that we can make sure and be very confident that we have not had any ongoing transmission," she said.

The cluster, all with the alpha variant of the coronavirus, began with a woman from Portugal who tested positive in the community hours after completing 14 days of mandatory hotel quarantine.

It since spread to two more of her close contacts, as well as two others from the Portuguese Family Centre.

Dr Young said she understands one of today's cases might be the partner of the manager of the Portuguese Family Centre who tested positive yesterday, while the other person spent the day travelling to a number of places with the woman while she was infectious.

Deputy Premier Steven Miles said the state government was continuing to monitor the situation in Sydney with its growing outbreak of the highly contagious Delta variant.

He said police yesterday turned about 186 people who attempted to enter Queensland on a plane from an interstate hotspot, in breach of current travel restrictions.

A total of 130 people were put into hotel quarantine.

Miles said there was concern about people from Sydney holidaying alongside Queenslanders in northern NSW over the school holiday period, so local border passes will be reintroduced for all travellers from 1am on Monday.

The government had previously announced an exemption for residents on the NSW-Queensland border.

A number of Queensland's restrictions eased from 1am (Queensland time), but the requirement to use the Check-In App has been expanded to more places.

Meanwhile Victoria has recorded no new local Covid-19 cases beyond the two positive results announced yesterday that were linked to the Sydney outbreak.

Public transport services used by one of the cases from Melbourne Airport to Oakleigh have also been added to the list of exposure sites, along with Flinders Street, Broadmeadows and Oakleigh train stations.