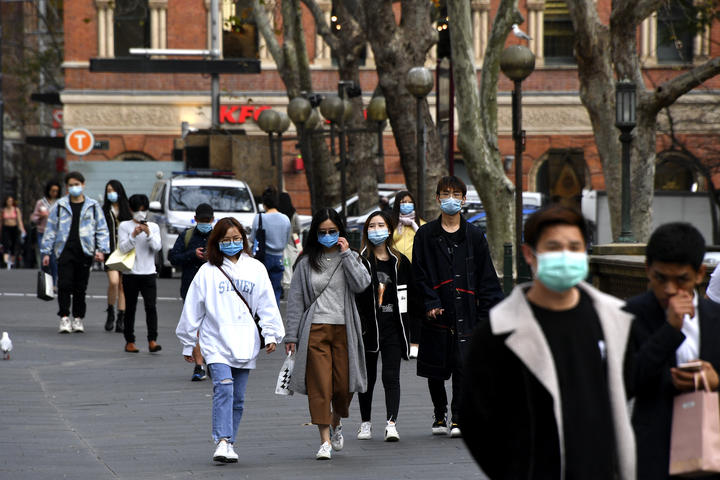 The border was closed to the state for 72 hours as more cases of Covid-19 emerge there and an Australian traveller to Wellington has led tolevel 2 restrictions there.

Queensland has also had a new case, but health officials deem the risk to New Zealand to be low.

Travellers from other parts of Australia must continue to meet eligibility requirements, including having not been in a location of interest prior to travel. There are no new cases in managed isolation in New Zealand today.

One of the new Sydney infections announced on Thursday morning was a man in his 40s who was not linked to a known case or cluster.

Another unlinked infection was revealed yesterday - a western Sydney hairdresser who worked in Double Bay, in Sydney's east.

NSW Health said three of the hairdresser's close contacts had tested positive and were all in isolation whilst infectious.

Contact tracers were urgently investigating the source of both cases.

Another case was linked to the West Hoxton birthday party in Sydney's southwest, which was described by chief health officer Kerry Chant yesterday as a "super spreader" event.

Of the 30 people who attended the party, 11 have now tested positive.

NSW Agriculture Minister Adam Marshall also tested positive for the virus after attending a dinner with colleagues in Paddington on Monday night.

Parliament House on Macquarie Street today shut its doors and several MPs - including Health Minister Brad Hazzard - and their staff are now isolating.

There were 22,812 test results received yesterday, and 17,803 doses of vaccine were administered at state-run sites.

New restriction levels will come in effect at midnight, effectively bringing metropolitan Melbourne in line with regional Victoria on all restrictions except for density caps in venues.

Across Victoria, public gatherings will be allowed with up to 50 people, and up to 15 people will be able to visit a home per day.

The number of people allowed in offices will increase to 75 percent of capacity, or 30 people, whichever is greater.

Queensland has recorded three new locally acquired cases of Covid-19, including the manager of the Brisbane Portuguese Family Centre that was visited by a woman at the weekend while she was infectious.

The 62-year-old man, a manager at the Ellen Grove restaurant in Brisbane's south-west on Saturday, told the ABC this morning he returned a positive test result on Wednesday night.

He was identified as a close contact of a woman who flew into Australia from Portugal and visited the restaurant while unknowingly infectious.

Queensland Deputy Premier Steven Miles later confirmed two other locally acquired cases in the state, both close contacts of the flight attendant who flew into Queensland from Portugal earlier this month.

The close contacts were travelling with the woman when she was out and about in Brisbane on Saturday.

All cases had contracted the Alpha variant.