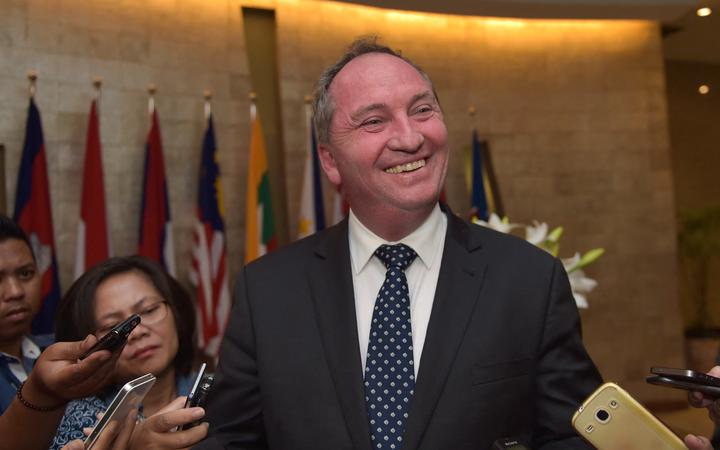 Barnaby Joyce has been trying to regain the party leadership for years. (file pic) Photo: AFP

Sources have told the ABC Joyce defeated former leader Michael McCormack in a very close contest this morning after years of seeking a return to his party's leadership.

Queensland Senator Matt Canavan moved a spill motion to bring on the leadership vote at a partyroom meeting this morning.

Joyce launched a similar challenge in February last year, where he was unsuccessful.

He resigned as leader and deputy prime minister in 2018 after facing sustained pressure.

Joyce was accused of sexual harassment - a claim he strenuously denied.

It had also emerged that he had an affair with a former staffer. That affair led to then prime minister Malcolm Turnbull introducing the so-called "bonk ban", which made it against the ministerial code of conduct to have sex with staff.

A National Party investigation into the sexual harassment allegation was unable to make a finding into the matter.

The position of National's deputy leader was not contested today and David Littleproud will continue in that role.

"Barnaby Joyce has been elected leader of the National Party at a federal level and will therefore be going through the various situations that he has to go through," he said.

There had been disquiet in the party about Prime Minister Scott Morrison's increasing support of a net zero by 2050 emissions target.

Critics of McCormack had said he lacked cut-through and had not established enough of a brand differentiation to the Liberal Party.

When asked if his colleagues had betrayed him, McCormack said, "That's democracy".

Morrison this morning said he was happy with McCormack's leadership and said the pair had a "wonderful partnership" and had provided stable leadership for Australia. 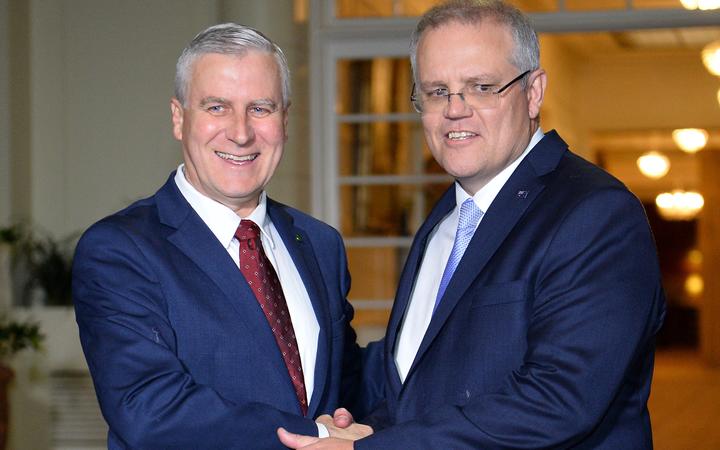 Michael McCormack, left, and Scott Morrison shake hands after the latter was sworn in as prime minister in August 2018. Photo: AFP

There are 21 people in the National Party room, with 16 members in the House of Representatives, and five senators.

Joyce secured at least 11 votes, but it was not clear who those votes came from.

The last leadership challenge was on the first sitting day of 2020, which was criticised for distracting from parliamentary tributes to the devastation left in the wake of the 2019/20 bushfires.

Opposition Leader Anthony Albanese took aim at the latest spill, criticising the Nationals for distracting from the vaccine rollout.

"Now instead of rolling out the vaccine to the Australian people, they just concentrated on rolling each other," he said.

"The rolling of Michael McCormack, a decent human being, by Barnaby Joyce, represents the sixth combination of prime minister and deputy prime Minister under the eight long years of this government."