Nationals leader and Deputy Prime Minister Michael McCormack has seen off a challenge for his job from his predecessor, Barnaby Joyce. 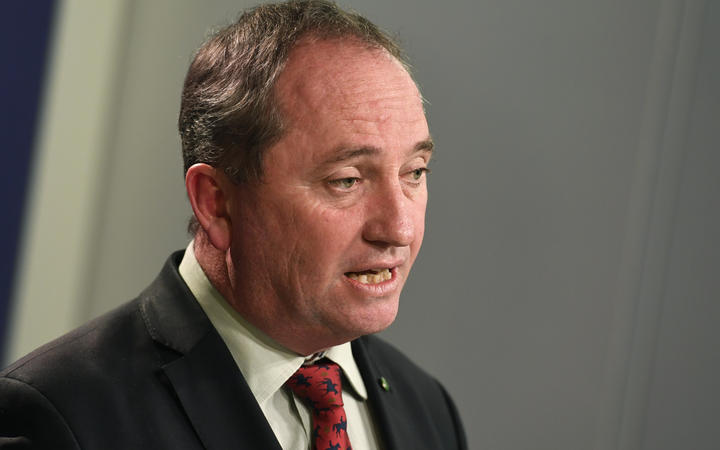 Joyce called for a challenge to McCormack's tenure as Nationals leader yesterday.

Jostling for the leadership began when Bridget McKenzie resigned as deputy leader on Sunday, amid the sports grants saga.

"I look forward to working and continuing to work with Barnaby Joyce, who put his hand up for the leadership," McCormack said when he emerged from the partyroom meeting.

"I also continue to look forward to working with Keith Pitt and David Gillespie, who put their hands up for the deputy leader's role."

McCormack has led the Nationals since Joyce lost the job surrounded by scandals two years ago.

McCormack has faced internal criticism about his leadership and had to contend with backbench destabilisation since assuming the role.

"I commend David Littleproud as the newly elected deputy leader for the role he played this very worrying and troubling summer in drought, in bushfires and everything else that has beset regional Australia," McCormack said.

"We will continue as a united team, to put the people of regional Australia first and foremost."

Littleproud, who was elected to Parliament in 2016, held the water and agriculture portfolios until last May's election, after which Senator McKenzie became the agriculture minister.

He now holds the water, drought and emergency management portfolios.

"This is a proud day for me. I joined this great party 22 years ago, in my electorate, [in] the little town of Stanthorpe," Littleproud said.

"I believe very much in the values of the National Party. This is about hope, this is about vision for our people in regional and rural Australia.

"This is about now back to business. The shenanigans are over, it's time to get back to looking after those people that are facing drought, that have faced up to the fires. It's time for us to focus on them, not us."

Minister loses seat on the frontbench

The leadership ballot has also cost Resources Minister Matt Canavan his seat on the frontbench.

He yesterday called McCormack to offer his resignation in order to back Joyce's bid to return to the leadership.

Senator Canavan offered a scathing assessment of McCormack's leadership in announcing his decision on Monday night.

"Matt Canavan has resigned as Resources Minister, I wish him the best," McCormack said on Tuesday.

That departure, along with Senator McKenzie's resignation, means McCormack will have to promote two Nationals to the frontbench, which will earn them seats in the Cabinet.