Australian deputy prime minister Barnaby Joyce has stepped down, after a formal complaint of sexual harrassment was laid. 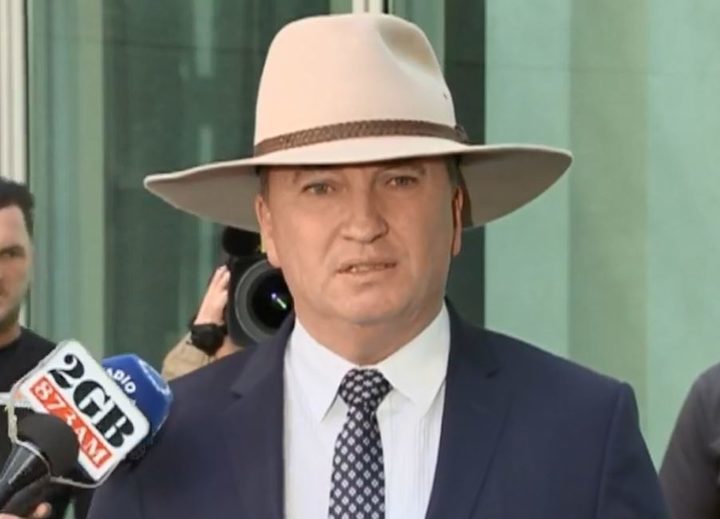 Mr Joyce is also giving up his role as the leader of the National Party, the junior partner in the ruling centre-right coalition, he confirmed at a press conference this afternoon.

He has been on leave, after revelations that he is expecting a child with his former media adviser.

He said he would offer his resignation on Monday.

Mr Joyce described his work proudly as that of a "circuit-breaker".

Mr Joyce also took a swipe at "leakers" who shared stories about him and his affair and said the treatment of his family during the ordeal was "completely and utterly unwarranted".

The National Party yesterday confirmed it had received a formal complaint against Mr Joyce, which the ABC reported was in relation to an allegation of sexual harassment involving a West Australian woman.

Mr Joyce earlier said he had been "made indirectly aware" of the allegation and described the claim as "spurious and defamatory".

He said allegations of wrongdoing would be referred to police.

"All complaints are taken seriously and treated with the strict confidentiality and given due process," National Party federal director Ben Hindmarsh said in a statement.

WA Police said they had not received a complaint about Mr Joyce.

Senator Cormann is acting Prime Minister while Malcolm Turnbull is on a trip to the US.

When asked about the complaint against Mr Joyce, Senator Cormann said it was "appropriate for allegations of this nature" to be properly investigated.

"Any allegation of sexual harassment is a very serious allegation. Barnaby Joyce has denied the allegation, but it's being investigated," he said.

"It's obviously important and appropriate that those allegations are being investigated, and further steps obviously will depend on the outcomes of that investigation."

Mr Turnbull did not address the formal complaint against Mr Joyce at a press conference in Washington DC early this morning.

Asked about whether he still supported Mr Joyce as Nationals leader, he told reporters it was not up to him.

Senator Cormann repeated that exact statement when asked whether Mr Joyce was fit to remain as Deputy Prime Minister, and added:

"Obviously, there are issues that are being considered at the moment. The National Party has received a formal complaint in relation to certain matters."