Australian Prime Minister Malcolm Turnbull has announced deputy PM Barnaby Joyce will take leave next week, so will not take up the role of acting prime minister. 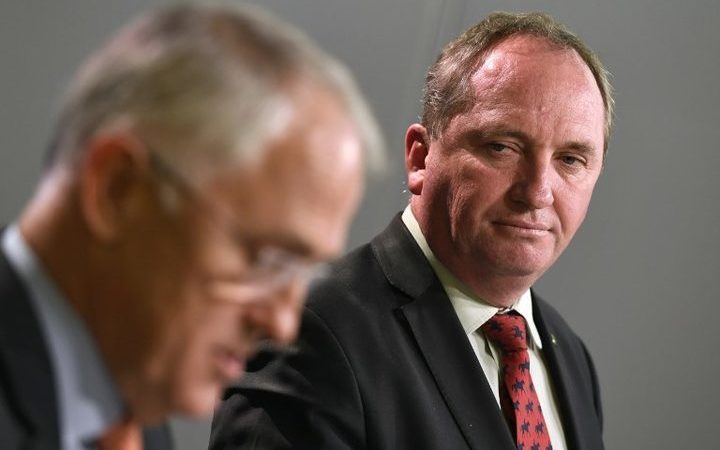 Finance Minister Mathias Cormann will instead be acting PM when Mr Turnbull leaves the country.

Mr Joyce has been under immense pressure because of his affair with a former staff member and questions about whether the code of ministerial conduct was followed.

His future is precarious, with some of his colleagues considering asking him to quit as leader because of the damage the revelations about his relationship have done to the party.

The prospect of Mr Joyce being acting prime minister when Mr Turnbull travelled overseas next week had been worrying many Nationals, who feared that putting Mr Joyce in the spotlight would have added to the crisis.

Mr Turnbull has now defused that by announcing Mr Joyce will be on leave instead of being acting PM.

Labor has already questioned if that decision means Mr Joyce cannot do his job.

"Are we simply meant to believe it is all a big coincidence?" Labor leader Bill Shorten asked.

Deputy Liberal leader Julie Bishop would normally be the acting Prime Minister if the Nationals leader is unavailable.

But Ms Bishop is also travelling overseas next week, which is why Senator Cormann will take the job.

He is next in line because of his role as Government Senate leader.

Mr Joyce remains under intense pressure, with Federal Labor demanding to know if he misled Parliament earlier today over the rent-free use of an apartment.

The Opposition accused Mr Joyce of breaching ministerial standards by asking for a place to live and receiving the gift of six months' free rent, which is worth about $A12,000.

Labor argued the code means ministers "must not seek or encourage any form of gift in their personal capacity".

Mr Joyce insisted he had not breached the code because he said he did not ask his friend, businessman Greg Maguire, for the apartment, arguing that Mr Maguire offered it to him.

But Labor has now questioned whether or not Mr Joyce misled Parliament, because two journalists who previously interviewed Mr Maguire quoted him as saying Mr Joyce did ask for the use of the premises.

In January, Mr Joyce updated his parliamentary register to show that he had been given free use of an apartment in Armidale, but did not reveal that it was donated by Mr Maguire.

It pointed out that Mr Joyce hosted a function organised by his department at Mr Maguire's Powerhouse Hotel in Tamworth.