MPs from Australia's conservative National Party have expressed concern about the marriage breakdown and affair of the Deputy Prime Minister Barnaby Joyce at a party room meeting. 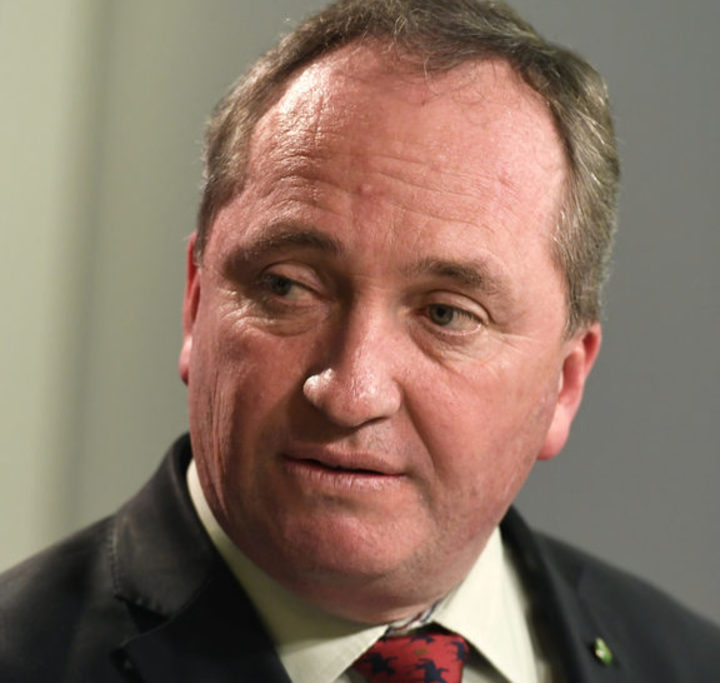 Barnaby Joyce is under pressure over his affair with a staff member who is now pregnant with his child. Photo: AFP

Pressure is mounting on Mr Joyce over his affair with staffer Vikki Campion who is now pregnant with his child.

Ms Campion was given positions in the offices of other National MPs - raising questions about whether ministerial standards governing the employment of family members or partners was breached.

The code says prime ministerial approval must be given if family members or partners are employed.

But a spokesman for the Prime Minister said that aspect of the ministerial code of conduct was not invoked because Ms Campion was not regarded as Mr Joyce's partner at the time, as he was still married.

That meant the staffing issue was only a matter for the Nationals.

The spokesman said Malcolm Turnbull was not aware of the relationship between Mr Joyce and Ms Campion.

The ABC understands Mr Joyce's affair could prompt the Federal Government to consider tightening the ministerial standards to clarify the rules surrounding relationships.

The marriage breakdown and the revelation of the affair are worrying some Nationals.

Mr Joyce's wife has said she feels betrayed by his actions.

One parliamentary member of the Nationals said it was "all people were talking about" over the weekend and some some voters were "horrified".

Another said women in particular were "filthy about it", suggesting they were never strong fans of Mr Joyce, but that this episode had hardened their views.

A third said calls had been received from Nationals members saying they would not be handing out how-to-vote cards at the next election if Mr Joyce remained leader.

"Toxic" was another term used by Nationals to describe Mr Joyce's situation.

"Let me tell you the people who keep Barnaby here and in his position are National Party people and he has 100 percent support from all of us," he said.

"I had a good chat to Barnaby yesterday - he's going OK but to be frank he is under a lot of pressure, no doubt," Senator Williams said.

He said the publicity surrounding Mr Joyce was unwelcome.

"There are headlines I would rather not see, but I don't control the headlines," he said.

Senator Williams would not say whether he was confident Mr Joyce would lead the Nationals to the next election.

"Let's see how all the travel things come out and so on, I just don't know," he said.

Senator Williams said he accepted Mr Joyce's assurances that no public money was misspent, but he also noted that he could not be sure what claims had been lodged.

"I don't know if he has done anything wrong by the law of the Parliament, by the taxpayers, I can't judge on that. So how can I make an opinion when I simply don't know?" he said.

He noted Mr Joyce had said that freedom of information requests had not uncovered any breaches.

"I hope that is the situation and let's see what pans out," Senator Williams said.

"Hopefully he hasn't breached any regulations when it comes to travel allowances or the spending of the public purse.

"I am confident that everything is alright but I am not sitting in his office looking over his travel claims, so I can't justify what's what."

He said he felt sorry for Mr Joyce and "very sorry" for his estranged wife Natalie and their four daughters.

Barnaby Joyce rescinded his New Zealand citizenship last year after it was found he had dual citizenship, a status that is barred for politicians under Australia's constitution to prevent split allegiances.