Australian Deputy Prime Minister Barnaby Joyce has publicly confirmed his former staffer Vikki Campion is his partner, but maintains they were not together when she worked in his office. 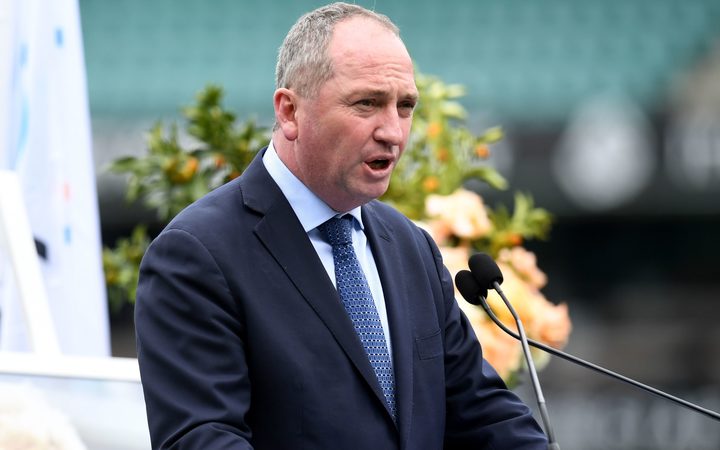 Mr Joyce made a short statement outside Parliament this morning, apologising to his family and to voters in his electorate.

He has followed that with a written statement which goes into more detail about his deep regret at the failure of his 24-year marriage.

Mr Joyce's statement sets out that he and his former media adviser Ms Campion are having a child together in mid-April.

He asks for privacy, saying: "This has been a searing personal experience for Natalie, our daughters and for Vikki.

"Criticise me if you wish but please have some regard for them."

It comes as Federal Labor questions how tenable it is for the Deputy Prime Minister to continue his position in Cabinet.

Malcolm Turnbull is travelling to the United States next week and he confirmed yesterday Mr Joyce would be Acting Prime Minister.

But Mr Joyce is in a mess about his personal behaviour and his relationship with Ms Campion.

"Acting Prime Minister is an extraordinarily important position and it is hard to believe Mr Joyce could do justice to that position given the distractions he is now enduring," shadow attorney-general Mark Dreyfus said.

And LNP backbencher Ian Macdonald has added to the pressure on Mr Joyce, saying that being acting Prime Minister next week would "take the focus away from where the country is heading".

Mr Macdonald said Mr Joyce was the only person who could resolve the private issue.

When pressed on whether the Deputy PM and National leader should step aside, Senator Macdonald said it was "a matter for Barnaby to determine".

"I am sure he is considering all the options," he said.

"I know he, like me, would not want to detract from the Government's commitment to govern Australia properly," he said.

Mr Macdonald said the focus on Mr Joyce was a distraction from the Government's ability to promote itself.

'Mr Turnbull has to explain what he knew'

Federal Labor is now piling the political pressure on and moving to stop Mr Turnbull from distancing himself from Mr Joyce.

"Mr Turnbull has to explain what he knew and when he knew it about the circumstances of Mr Joyce's conduct," Mr Dreyfus said.

"It goes directly to the matter of ministerial standards," he said.

Labor has questioned if Ms Campion's employment in other Nationals offices breached the ministerial code of conduct.

Those rules say employing a minister's partner or family member must be approved by the prime minister.

In Mr Joyce's written statement, he said he did not discuss the matters with the PM or his office because, "Vikki was not my partner".

That reasoning has been widely criticised because Centrelink is much more stringent in the way it defines relationships when it calculates benefits.

Labor frontbencher Chris Bowen said Centrelink would regard it as laughable.

Greens senator Rachel Siewert said she had received emails from people aghast at the excuse that Ms Campion was not Mr Joyce's partner.

There is intense focus on Mr Joyce in newspapers across the nation today, touching on his personal behaviour towards women and his travel arrangements.

"I can only imagine how distressing the reporting of recent days is to his wife and kids and his new partner for that matter," Senator Cormann said.

But he also again attempted to distance the Liberal Party from the Nationals, saying the leadership of the National Party is a matter for the Nationals.

Mr Joyce rescinded his New Zealand citizenship last year after it was found he had dual citizenship, a status that is barred for politicians under Australia's constitution to prevent split allegiances.