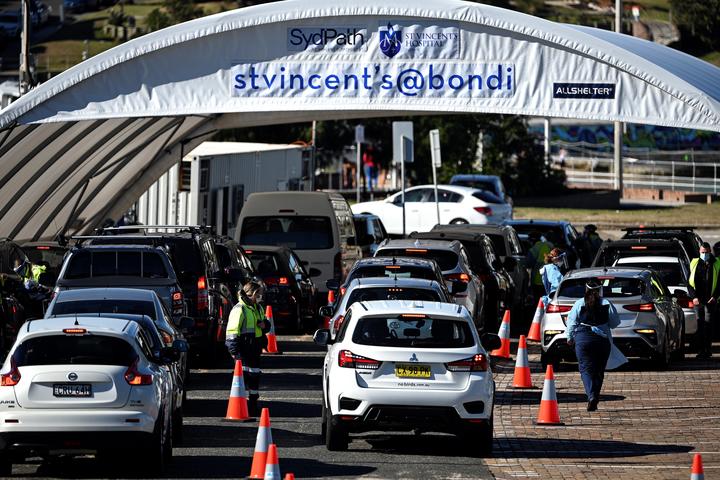 Two new locally acquired cases were recorded in the 24 hours to 8pm last night, one being the man in his 50s who was announced yesterday morning.

The second case is a woman in her 40s from the eastern suburbs who attended several venues in Westfield Bondi Junction.

A new case reported overnight is a man in his 30s who lives in Sydney and attended Westfield Bondi Junction.

This case will be included in tomorrow's numbers.

It's understood the man also visited the Broken Drum Cafe in Fairy Meadow, in the Illawarra, on Friday between 10.20am-10.40am.

A raft of new exposure sites have been added to the NSW Health website including a shopping centre in Drummoyne.

Birkenhead Point Outlet Centre said it had received confirmation from health officials that a Covid-19 case had visited a number of stores at the centre on Tuesday, 15 June.

The centre has advised that anyone who visited between 10am and 2pm on 15 June is a casual contact, and must immediately get tested and self-isolate until they receive a negative result.

NSW Health Minister Brad Hazzard said it had become apparent in past few days the Delta virus strain was a "near and present danger".

"It is a virus that is very capable of transmitting even when we have very fleeting proximity between the individual who is infectious, and any of us who might be passing by," Hazzard said.

CCTV footage showed the case detected yesterday, a man in his 50s, caught the virus from the limousine driver - the original case from the eastern suburbs cluster - after they were briefly standing near each other in the Myer store at Bondi Junction Westfield.

"It would appear he was somewhere in the range of between 10 and possibly 50-60 centimetres away in a passing situation," Hazzard said.

"Each had stood not far away from each other for a very short period of time and then it would appear that one of them possibly moved through the airspace that the other one had occupied."

Authorities are urging anyone who visited any contacted venues to follow advice and come forward for testing at the first sign of symptoms, and to take precautions.

"That means wearing a mask if you are out, working from home if you can," said NSW Health Dr Jeremy McAnulty.

"Don't go to gatherings, don't go to places where there are crowds, like a ski field. We want to take a very cautious approach to this evolving situation," McAnulty said.