An aged care worker at a facility in Melbourne's west has been diagnosed with Covid-19, sending the home into lockdown. 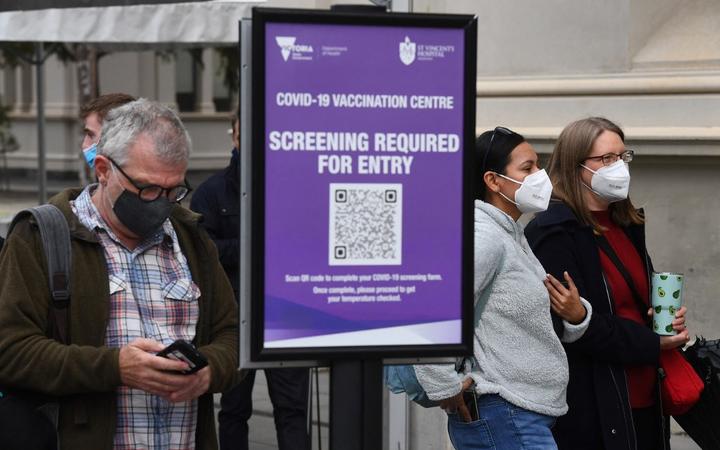 People arrive at a vaccination centre in Melbourne as the city undergoes its fourth lockdown. Photo: AFP

The worker at Arcare Maidstone was one of five locally acquired Covid-19 cases across Victoria reported yesterday.

The healthcare worker was not showing symptoms when she last worked at the home on 27 May, but later tested positive, Arcare said.

She had received a first, but not a second, dose of a coronavirus vaccine.

Two of the other five new confirmed infections were identified as close contacts of existing cases and were already in quarantine. A third is linked to one of the more than 170 exposure sites connected to the cluster.

Acting Premier James Merlino said investigations were underway to "confirm the nature" of the Arcare worker's infection and the fifth confirmed case.

Covid-19 response commander Jeroen Weimar said the aged care worker case was of "significant concern" for authorities, particularly because it could be a "mystery case" without a link.

"This is the biggest priority for us to understand," he said.

Genomic sequencing is currently underway to trace the source of her infection.

The outbreak, which has led to a lockdown, started with a Wollert man who contracted the virus in a South Australian quarantine hotel.

However, health teams are still yet to directly link him to the other cases in the cluster, leading to concern the virus may have been spreading undetected in the community.

The five local infections and an overseas-acquired case in hotel quarantine were detected from 45,301 test results processed on Saturday. 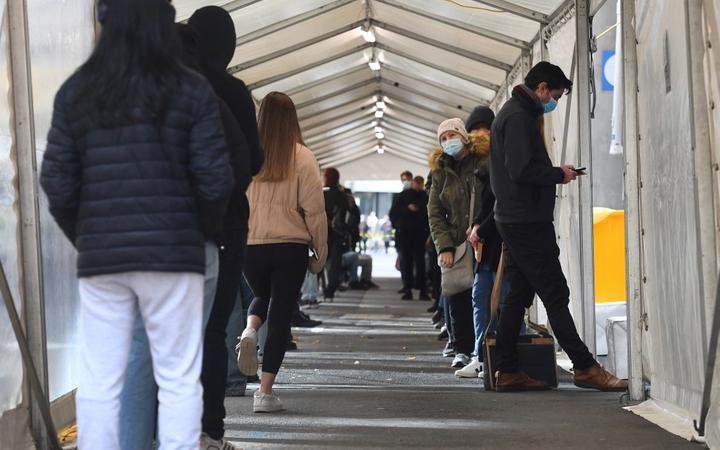 People wait to be tested in Melbourne. Photo: AFP

There are now 49 active infections in the state, including those in hotel quarantine.

There were 17,702 vaccine doses delivered in state-run centres on Saturday.

Some vaccinations done for residents, staff

Weimar said the Arcare Maidstone worker presented for testing as soon as she had symptoms.

"We're so so grateful to her for doing the right thing," he said.

Weimar said the aged care home was on the Commonwealth programme for vaccination and "over half" of the residents had been vaccinated.

"We believe about one-third of the staff have been vaccinated," Weimar said.

It is not clear how many of the staff or residents have received both doses.

On Thursday, it was revealed that of the 598 facilities in Victoria, 569 had received a first dose, leaving people in 29 facilities completely unvaccinated.

The federal government said all remaining aged care homes under the Commonwealth's rollout would receive their first dose by the end of the weekend.

No other cases have been linked to the facility and contact tracing work is underway.

As the outbreak has grown, more than 170 exposure sites have been listed on the health department's website.

Overnight, the busy Chadstone Shopping Centre and St Kilda restaurants were added to the list, which also includes five pubs and bars of "significant" concern and a dozen venues visited by an infected delivery driver over the space of a week.

The growing outbreak and large list of high-risk exposure sites prompted the snap lockdown, which was announced for the whole state on Thursday.

The lockdown is due to end at 11:59pm on Thursday, but the Acting Premier said it was still "too early" to discuss the easing of restrictions.