Victoria has entered a seven-day lockdown over concerns about a "highly infectious" variant of Covid-19. 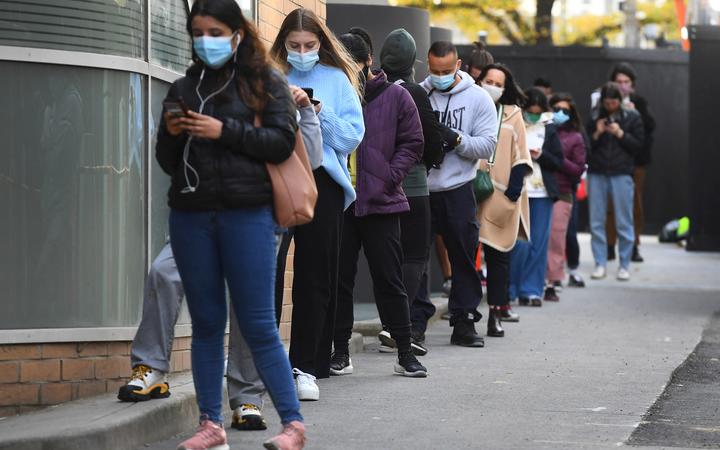 The variant in Victoria is a version of what is often called the "Indian variant", and it's spreading quickly in other countries as well.

"We've seen overseas how difficult that movement can be to control."

While there's still a lot to learn about how this virus behaves, here is what we know so far.

It was first detected in India last October and has since spread to more than 40 other countries, including Australia.

Each sublineage is slightly different, but all have spike protein mutations that have been associated with increased transmissibility.

The spike protein is what coronaviruses use to gain entry into human cells.

Cases in Victoria's latest cluster are infected with the first sublineage, B.1.617.1.

Experts believe the "Indian variant" could be more infectious than previous variants, based on how rapidly it is spreading in other countries.

We don't know whether this variant is more deadly or causes worse disease than other versions of the virus.

But Professor MacIntyre said there was some data that indicated B.1.617 could cause different symptoms.

"Based on reports from India, this variant may have atypical clinical presentations, such as abdominal pain, nausea, vomiting, diarrhoea and hearing impairments, as well as an absence of fever," she said.

"If this is the case, people should be on the alert for any of these symptoms as well as more typical Covid symptoms such as cough and fever."

But it's still early days when it comes to this particular variant, and experts are still learning about it.

More data and peer-reviewed research are needed to determine exactly how this virus behaves.

What else do we know about it?

Experts are keeping a close eye on B.1.617.1, but because it hasn't been around too long, there's still a lot to learn.

"We know more about [B.1.617.2], because that one is really beginning to take off and spread in the UK … that second variant also is spreading really well in India as well," University of Sydney virologist Megan Steain said.

"We know a bit less about the [variant] that's in Victoria just because there's been less cases with this particular [B.1.617.1] sub-variant.

"We know what mutations it has, and some of those mutations have been associated with increased transmissibility and some evasion of some antibody responses."

The World Health Organization (WHO) classified B.1.617 as a "variant of concern" on 11 May, based on evidence that suggested those viruses had higher rates of transmission compared to other variants.

The European Centre for Disease Prevention and Control (ECDC) has labelled B.1.617.1 specifically a "variant of interest", which essentially means experts are monitoring it closely.

The ECDC upgraded the second sublineage of the "Indian" variant, B.1.617.2, to a "variant of concern" a few days ago.

While experts believe the "Indian variant" could be more infectious than other variants, there is some good news.

The same protocols that have been effective at controlling outbreaks previously - lockdowns, masks, and hygiene measures - will also be effective at bringing the latest variant under control.

"If they're all put into place early … there's a really good chance that we'll be able to bring this outbreak under control really quickly," Dr Steain said.

Rob Grenfell from the CSIRO said it was "only a matter of time before an outbreak like this occurred".

"We've been lucky in Australia; we have kept the virus at bay, but we have also become complacent," Dr Grenfell said.

"This latest virus incursion in Melbourne is a sober reminder that anyone who is eligible for vaccination should go out and get their shot."

Why is Victoria worried?

When announcing the lockdown yesterday, Victorian officials said they were concerned about how quickly the virus was spreading.

Merlino said the time between people catching the virus and passing it on was "tighter than ever".

"To put that in some perspective, the usual transmission [of the virus] is about five to six days," he said yesterday.

"In some of these cases, within a day it's been transmitted. And in just 24 hours the number of cases has doubled."

"When we're seeing a member in a household become infected, almost everyone in that household is infected," he said.

That level of transmission is faster than what has been seen in previous outbreaks in Australia.

During last year's outbreaks, it was not unusual for some household members to remain COVID-free while others were infected.

"So it speaks to the infectiousness of this B.1.617 variant, but also the cycles that it's going through," Professor Sutton said.

"It really is rapid and that's led to the exponential increase."

How effective is the vaccine?

More studies are needed, but early data from the United Kingdom is promising.

A recent study showed two doses of the Pfizer and AstraZeneca vaccines provided a similar level of protection against the B.1.617.2 variant, as they did against the B.1.1.7 UK variant.

"This study provides reassurance that two doses of either vaccine offer high levels of protection against symptomatic disease from the B.1.617.2 variant," Public Health England's head of immunisation Mary Ramsay said in a statement.

"We expect the vaccines to be even more effective at preventing hospitalisation and death, so it is vital to get both doses to gain maximum protection against all existing and emerging variants."

There still isn't much information on how effective vaccines are against B.1.617.1 specifically.

But Dr Steain says it's likely vaccines will be effective against that version too.

"Importantly, they are still going to protect people from getting really severe infections, ending up in hospital and dying," she said.

How did it happen?

It is normal for viruses to change and mutate over time, because of how the infection process works.

When a cell gets infected, it generates more copies of the virus.

"Every time a virus replicates, there's a good chance that when it copies its genome it will just make a mistake, like a typo," Dr Steain said.

Sometimes those "typos" don't do much at all. But occasionally they can change how the virus behaves.

In most Covid-19 variants of concern, the "mistakes" are spike protein mutations that could make them more transmissible.

"Every time a cell gets infected, it's pumping out hundreds of thousands of copies of new viruses," Dr Steain said.

"So the chances a mistake will happen is quite high. It's just whether or not that can then give the virus an advantage, and whether it's able to spread and keep going."