The skies above Israel and the Palestinian Territories are again alight with explosions. The death toll is climbing and there is no end to the fighting in sight. 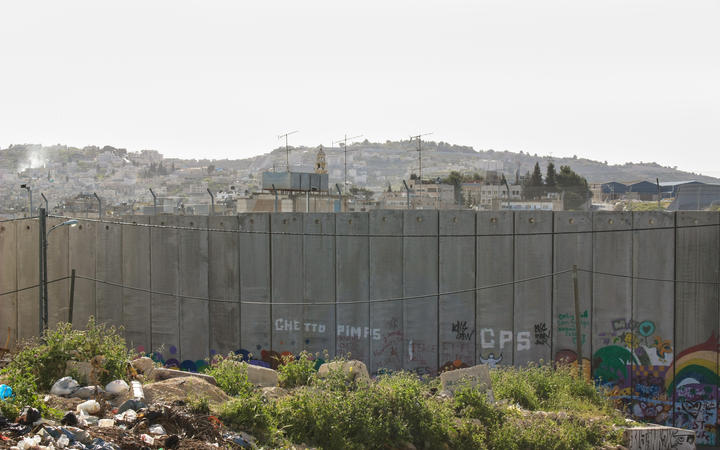 The West Bank Wall between Israel and Palestine. Photo: 123rf

This is the latest eruption of long-running tensions that date back to conflict over the establishment of Israel and the displacement of Palestinians. It is the worst violence since 2014, and there are warnings it could escalate into "full scale war".

There is a long history of occupation, oppression and violence in the region and it's impossible to explain it all in one concise article. But we can provide some background to explain what's happening at the moment and to contextualise the position of the relevant sides.

An abbreviated history of the region

The region we're talking about is between the Mediterranean Sea and the Jordan River, below Lebanon and north of Egypt.

Like many places on Earth, the history of the region is complex and bloodied. It has been ruled by many different powers over centuries, but Arab people have lived there throughout.

Most recently - and we're talking the past few hundred years - the area now known as Israel and the occupied Palestinian territories was ruled by the Ottoman Empire, and after World War I, the United Kingdom.

There's no straight line that can be drawn between religious groups in the area. It's home to a mix of religions, nationalisms, ethnicities and geopolitics. 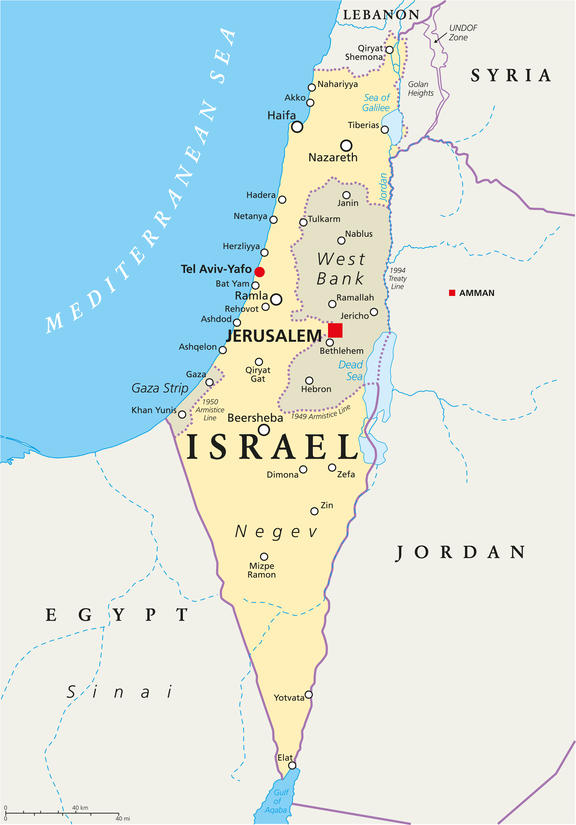 A map shows the location of Gaza, the West Bank and the land now known as Israel. Photo: 123rf

Both Arab people of different faiths and Israeli Jewish people date their claims to the land back thousands of years, but it was in the early 20th century that the brutal displacement of the Palestinians began.

In the late 1800s, a Jewish movement began with the goal of establishing a homeland in what was then Ottoman-ruled Palestine. It gathered pace after the defeat and collapse of the Ottoman Empire.

After World War I, the British ruled the area under a mandate from the League of Nations. They committed to the establishment of two separate states - one Jewish and one Arab.

After the Nazi genocide of the Jewish people in World War II, the newly formed United Nations voted to establish Israel alongside a Palestinian state.

Many Jews believe this was a homecoming, the return to their Holy Land and their rightful place.

In 1948, the state of Israel was founded. The Arab nations of the region, including Jordan and Egypt, refused to recognise it and war followed.

The new Israeli armed forces conquered more territory than envisaged by the UN vote - including the western half of Jerusalem.

The partition and subsequent war resulted in the displacement of hundreds of thousands of Palestinians.

Many were forced from their homes and their property was seized by Israelis. A much smaller number of Jews were displaced, mostly from East Jerusalem. 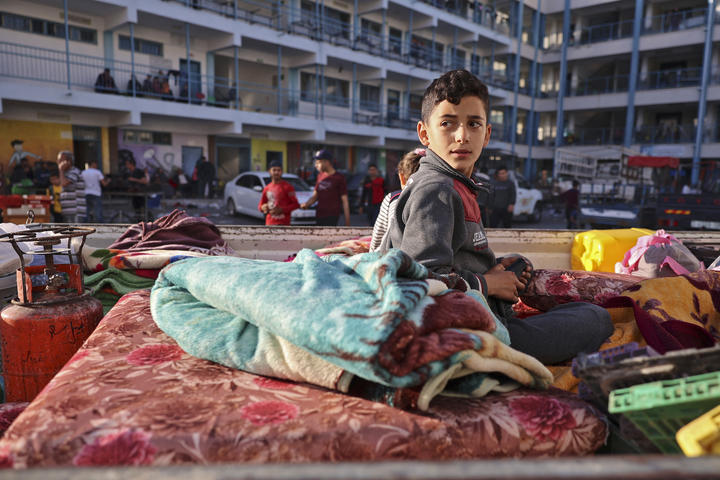 A Palestinian boy who fled his home due to Israeli air and artillery strikes sits on a mattress at a school hosting refugees in Gaza city yesterday. Photo: AFP

In the next war, in 1967, Israel extended its control further, pushing Jordan, Syria and Egypt back to take over the rest of Jerusalem and the surrounding West Bank, as well as the Gaza Strip and Golan Heights on the Syrian border.

Israel established long-running military occupation of these areas, and despite UN Security Council resolutions against it, Israel built new settlements for its people.

As well as civilian protesters, armed Palestinian groups have opposed the Israelis and several terrorist groups, including militant group Hamas, have launched waves of attacks, including suicide bombers.

Recently, the International Criminal Court launched an investigation into alleged war crimes by both Israel and Palestinians, and on Thursday its head prosecutor said she was watching current events "with great concern".

So, Israel is an independent state, but the Palestinians do not have an equivalent.

For decades, the international community has worked towards establishing a Palestinian state, but that hasn't happened.

The Palestinian National Authority, established in the 1990s, runs police and services in the major cities and towns of the West Bank, and has slowly brought the terrorist groups there under control.

While Israel still controls the air and sea space around Gaza, it pulled its troops out in 2005, but Hamas, not the Palestinian Authority, now controls it.

That's where the rockets fired at Israel are coming from.

And of course - Jerusalem. You might have heard news about Jerusalem being a disputed capital.

The fate of Jerusalem and its holy sites is one of the most explosive issues in the ongoing Israeli-Palestinian conflict.

Israel controls the whole city and has declared it the capital, but there are UN Security Council resolutions against that too because international law bans acquiring territory by force.

The Palestinians haven't given up on establishing their own capital in the eastern part of the city.

That's why most nations have their embassies in Tel Aviv, a city on Israel's Mediterranean coast, and why it was such a big deal when Donald Trump moved the US embassy to Jerusalem in 2018 - it's seen as recognition of Israel's claim.

So, the battle for Jerusalem has been going for decades.

Inside East Jerusalem is the al-Aqsa Mosque - the third holiest site in Islam.

The site is also sacred to Jews, who believe it's where the Jewish Second Temple stood until the first century, and is considered a "chronic flashpoint" in the regional conflict.

Over the weekend, violence erupted at the al-Aqsa Mosque when Israeli riot police fired rubber bullets and stun grenades at Palestinians.

Israel says they stormed the mosque's compound in response to Palestinians stockpiling rocks and throwing them at police. 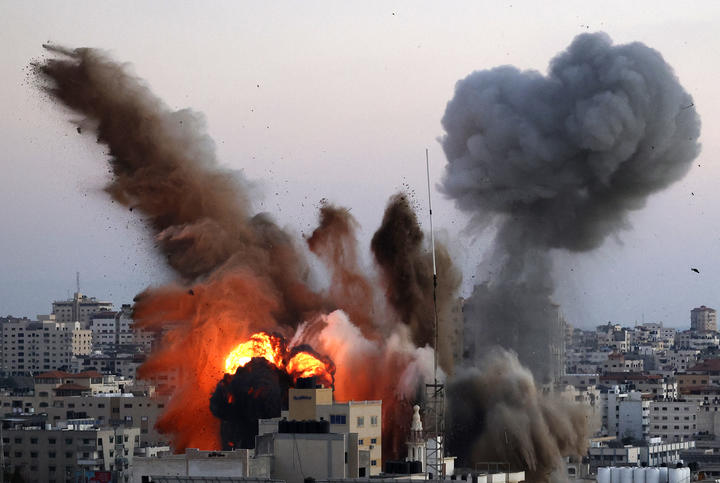 More than 300 Palestinians were injured, according to the Red Crescent, the Red Cross affiliate in the Muslim world.

At least 21 police officers were injured, according to Israeli police.

Hamas gave Israeli forces a deadline to be out of the area and when that lapsed, the militant group fired rockets into Israel from Gaza.

This ignition of the cross-border fight came after weeks of skirmishes on the streets, protests by Palestinians and demands Israeli forces leave parts of East Jerusalem.

Israel has now carried out hundreds of air strikes in Gaza, and Hamas militants have fired heavy rocket barrages at Tel Aviv, towards Jerusalem and at several southern Israeli cities.

The Israel Defense Forces are also attacking Gaza from the ground, but on the Israeli side of the border.

The hostilities are the most intense the region has seen since 2014, with the death toll climbing. 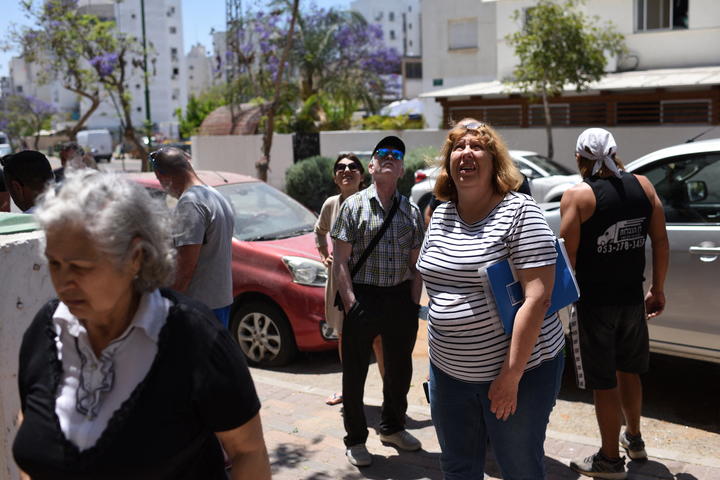 Israelis inspect the damage caused to a building hit by shrapnel from a rocket fired from the Gaza Strip in the Southern city Ashkelon yesterday. Photo: AFP

Commentators say several pressure points in the volatile Israeli-Palestinian relationship have recently converged and the violence that has broken out has escalated very quickly.

An ongoing trigger for violence is the Israeli settlement of the land they occupied in 1967.

Since his last election campaign, Israeli PM Benjamin Netanyahu has threatened to officially annex large swathes of the West Bank.

This week, an Israeli court was deliberating a case involving the East Jerusalem neighbourhood of Sheikh Jarrah.

The court was due to rule on whether authorities could evict dozens of Palestinians from their homes in the neighbourhood, but the ruling was delayed.

Sheikh Jarrah is an area of significance. It was captured by Israel in the 1967 war, and the evictions of Palestinian families by Jewish settlers are seen by the Palestinians as another bid to drive them from Jerusalem.

The settlers claim the area was occupied by Jews prior to the war and the Palestinians are squatters.

It's a very sensitive situation and has been met with protests from Palestinians. 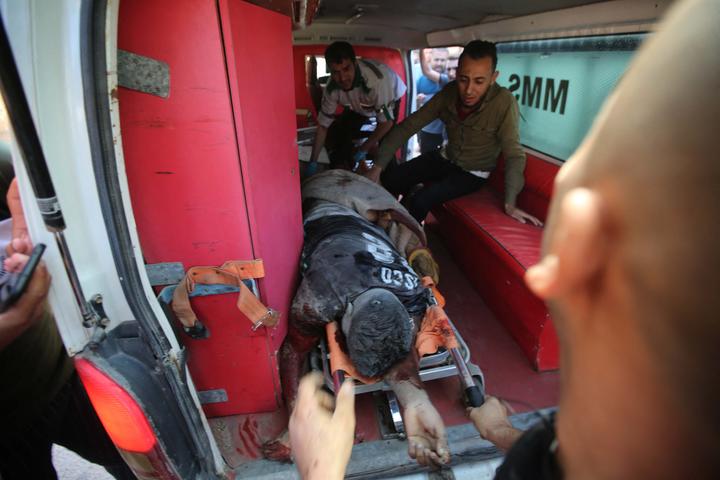 Health team members and civilians carry a wounded man to an ambulance after Israeli fighter jets carried out airstrikes on a building in Al-Bureyc refugee camp, Gaza Strip, on Thursday. Photo: 2021 Anadolu Agency

Also, Muslim Palestinians have been observing the holy month of Ramadan.

Anger flared last week when Israel decided to barricade a plaza outside of Jerusalem's Old City where Palestinians traditionally gather after evening prayers.

Then there was the "death to the Arabs" march on 22 April.

It was organised by a far-right group of Jewish extremists, which has recently seen several of its members elected to the Israeli Parliament.

That march went through occupied East Jerusalem and was seen as extremely provocative.

Violence followed and more than 100 Palestinians were injured as well as 20 Israeli police.

Adding to the uncertainty in the region, Israel has had four elections over two years, none with clear results, and the Palestinians in the West Bank have not been to the polls since 2006.

What are Israelis saying?

Israelis believe the aerial bombardments of Gaza are justified responses to rocket attacks on Israel launched by Hamas, a group many countries recognise as a terrorist organisation.

Israeli Prime Minister Benjamin Netanyahu has been very clear, insisting Israel will not back down and saying "this is just the beginning".

"We'll hit them like they've never dreamed possible," he said.

Prime Minister Benjamin Netanyahu:
"We are in the midst of a major campaign – Operation Guardian of the Walls. Yesterday and today, the IDF attacked hundreds of Hamas and Islamic Jihad terrorist targets in the Gaza Strip. pic.twitter.com/ET7KzCGOFs

Overnight on Wednesday, Netanyahu also had a warning for Israelis.

"Citizens of Israel, what is happening in the towns of Israel in recent days is intolerable. We've seen Arab rioters torching synagogues, torching cars, storming policemen, hurting peaceful and innocent citizens. This is something we cannot accept. This is anarchy. Nothing can justify it," he said.

"We will not accept it. This is not us, not this violence, not this savagery. We will bring back governance to Israel's cities everywhere, in all cities."

What are Palestinians saying?

Palestinians argue they are not the instigator of the violence, and their rockets are in reaction to Israeli oppression and are part of the ongoing resistance to occupation.

Hamas chief Ismail Haniyeh said: "The confrontation with the enemy is open-ended."

The head of the Palestinian Mission to the UK, Husam Zomlot, gave an interview to BBC in which he said "this isn't about Hamas".

"This is about Israel. Israel provokes. Israel commits every crime you can imagine. Israel injures more than 300 worshippers, peaceful worshippers," he said.

"Israel evicts people from their homes, continues with its sheer violations of the very basic rights of people and then they try to blame the react, rather than the act. This must stop."

“People were going on the holiest night of Ramadan, Laylat al-Qadr, to pray… look at the hundreds who have been injured.”

Head of Palestinian Mission to the UK @hzomlot talks to #Newsnight about the spiralling violence which has triggered airstrikes and rocket attacks pic.twitter.com/dMgChzgUKH