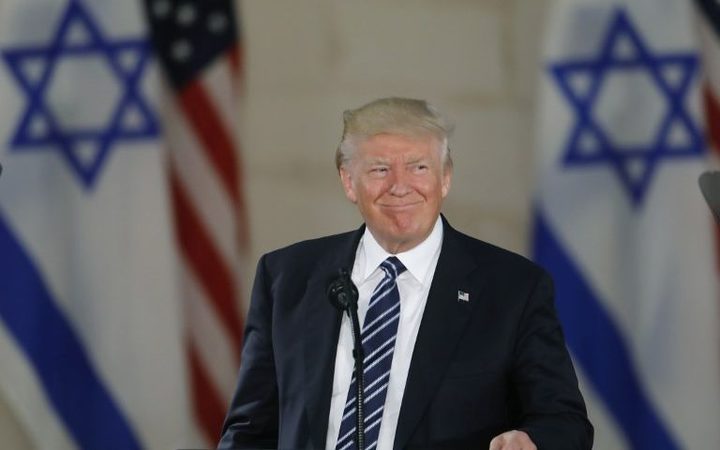 US President Donald Trump speaking during a visit to the Israel Museum in Jerusalem Photo: AFP or licensors

But the officials said Mr Trump would not immediately move the US embassy from Tel Aviv to Jerusalem.

The news comes ahead of an expected speech by Mr Trump on Wednesday.

Arab leaders earlier warned against moving the US embassy in Israel to Jerusalem, with one saying this would be "a flagrant provocation to Muslims".

The status of Jerusalem - a holy site for Israelis and Palestinians - is extremely contentious.

In recognising Jerusalem as Israel's capital, the US becomes the first country to do so since the foundation of the state in 1948.

What has the US just announced?

The Trump administration officials said recognising Jerusalem as Israel's capital was seen "a recognition of reality" by the president.

However, specific boundaries of the city would remain subject to a final status agreement, the official said. The status of holy sites will not be affected.

Mr Trump also would direct the state department to begin the process of moving the US embassy to Jerusalem - but this could take several years.

He promised the move to pro-Israel voters during his campaign for the presidency.

The US officials added that the president would be signing a regular waiver blocking the embassy's move from Tel Aviv to Jerusalem until the new building was completed.

Ahead of his formal announcement, Mr Trump phoned several regional leaders to tell them he intended to move the US embassy from Tel Aviv to Jerusalem.

What's been the world reaction?

Before the confirmation of the US move, Saudi Arabia's King Salman bin Abdulaziz al-Saud told Mr Trump that the relocation of the embassy or recognition of Jerusalem as Israel's capital "would constitute a flagrant provocation of Muslims, all over the world".

Among the reaction from those leaders:

Palestinian leader Mahmoud Abbas warned "of the dangerous consequences such a decision would have to the peace process and to the peace, security and stability of the region and of the world"

Jordan's King Abdullah said the decision would "undermine efforts to resume the peace process" and provoke Muslims. Jordan acts as custodian of the Islamic sites in Jerusalem

Egypt's President Abdul Fattah al-Sisi urged Mr Trump "not to complicate the situation in the region".

Turkish President Recep Tayyip Erdogan warned his country could sever ties with Israel if the US recognised Jerusalem as its capital.

And Ismail Haniya, the chief of the Islamist Hamas group that runs Gaza, said a shift of the embassy and recognition of Jerusalem as the Israeli capital would cross "every red line".

France, the European Union and the Arab League have also expressed concern.

Israel's intelligence minister Israel Katz told Army Radio that Israel was "preparing for every option", including an outbreak of violence.