Clashes have erupted between Palestinian protesters and Israeli police in a second night of protests, as tens of thousands of worshippers prayed on Islam's holy night of Laylat al-Qadr. 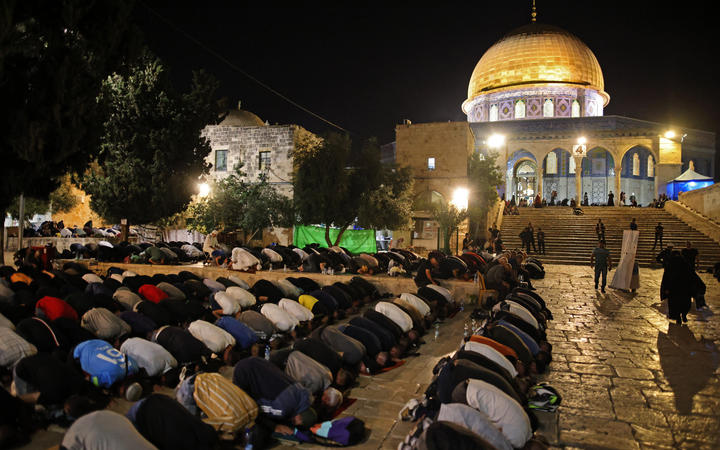 As part of Ramadan celebrations Muslim worshippers gathered at the Al-Aqsa Mosque in the Old City of Jerusalem for the holy Night of Destiny, Laylat al-Qadr.

However skirmishes erupted nearby between Israeli police and Palestinian protesters in the streets leading to the walled Old City gates. Palestinian youth threw stones, lit fires and tore down police barricades as officers on horseback and in riot gear used stun grenades and water cannons against them.

At least 80 people were injured, including minors and a one-year-old and 14 year old were among those taken to hospital, the Palestine Red Crescent said. Israeli police said at least one officer was hurt. 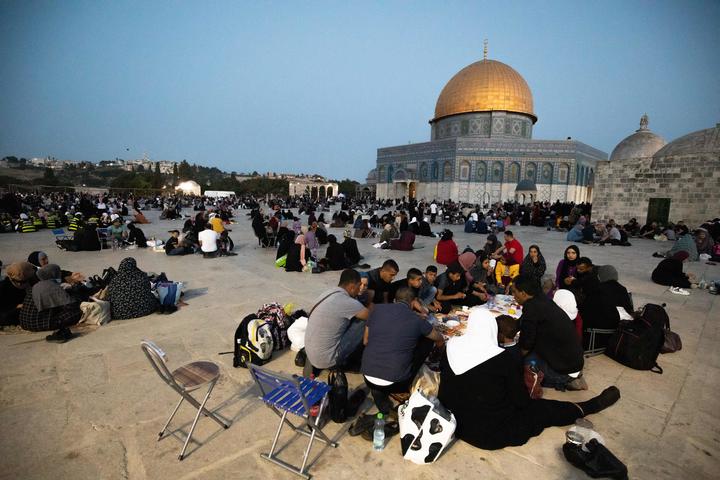 Palestinians break their fast at Al-Aqsa Mosque during Laylat al-Qadr, one of their holiest nights, on 9 May. Photo: AFP

"They do not want us to pray. There is a fight every day, every day there are clashes. Every day there are troubles," said Mahmoud al-Marbua, 27, speaking near the Old City's Damascus Gate as police chased youths and fired thunder-flashes at them.

Tensions have mounted in the city throughout the Muslim holy month of Ramadan, amid growing anger over the potential eviction of Palestinians from homes in Jerusalem on land claimed by Jewish settlers.

At the Palestinian Gaza Strip, hundreds of protesters gathered along the border with Israel. The Israeli military said the crowds threw burning tyres and firecrackers toward the troops.

Gaza militants fired at least one rocket into Israel which landed in an open area, the military said.

"We salute the people of Al-Aqsa who oppose the arrogance of the Zionists and we call on our people in Palestine to support their brothers by all means," tweeted Moussa Abu Marzouk, a leader of the armed Islamist group Hamas that rules Gaza. 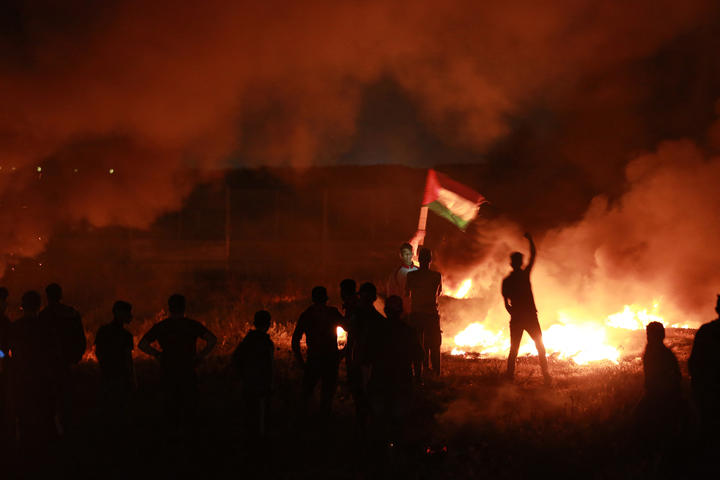 Demonstrators burn tires at the Israeli border east of the Gaza Strip on 9 May, after clashes between Israeli forces and palestinians in Jerusalem. Photo: AFP

Israel said it was beefing up security forces on Saturday in anticipation of further confrontations in Jerusalem, the occupied West Bank and Gaza, after fierce clashes erupted the previous night at Al-Aqsa Mosque.

A Palestinian official said Egypt was mediating between the sides to prevent further escalation, and Saturday's violence appeared less pronounced than Friday's events.

On Friday, police fired rubber bullets and stun grenades towards rock-hurling Palestinian youths at Al-Aqsa Mosque, which is at a place that is holy for both Muslims and Jews.

At least 205 Palestinians and 18 Israeli officers were injured in Friday's confrontations, which drew international condemnations and calls for calm.

Police Commissioner Yaakov Shabtai said extra officers were being deployed in Jerusalem on Saturday to "enable freedom of worship and maintain order and security."

"At the same time, we will not allow violent riots, lawbreaking or the harming of police officers. We ask everyone to calm the spirits and violence, particularly on such an important day for the Muslim religion," Shabtai said in a statement.

The Israeli military said it was boosting troops in the West Bank and near the Gaza Strip, where Palestinians have sent incendiary balloons over the border, igniting brushfires in Israeli territory. A military spokesman said extra forces there would largely be firefighting ones.

The Middle East quartet of mediators - the United States, Russia, the European Union and the United Nations expressed concern over the violence and potential Jerusalem evictions.

"We call upon Israeli authorities to exercise restraint and to avoid measures that would further escalate the situation during this period of Muslim Holy Days," the Quartet said in a statement.

Prime Minister Benjamin Netanyahu said in a statement that law and order would be maintained in Jerusalem as would the right to worship.

Earlier on Saturday Television footage showed buses of Muslim worshippers heading from Israeli Arab cities to Al-Aqsa being stopped by police on the main highway to Jerusalem.

Word of the roadblock spread on social media, drawing hundreds of young men from nearby Arab villages and from Jerusalem.

Dozens drove their cars the wrong way down the now-empty Jerusalem-bound lanes, picking up fellow Muslims who had abandoned their own vehicles to start the uphill trek on foot. Some chanted in Arabic: "With our souls and our blood, we will redeem you, Al-Aqsa!"

Police said it was stopping only those planning to take part in riots before the buses were allowed to proceed. Scuffles broke out and footage showed officers firing stun grenades.

Tension was expected to remain high over the next few days. Israel's Supreme Court will hold a hearing on the Sheikh Jarrah evictions on Monday, the same day that Israel marks Jerusalem Day - its annual celebration of its capture of East Jerusalem during the 1967 Middle East war.

Palestinians want East Jerusalem as the capital of a future state. Israel claims the entire city as its eternal, indivisible capital. Its annexation of the eastern section was not recognised internationally.