Violence in Gaza and Israel shows no sign of abating amid continued rocket fire and air strikes, and civil unrest among Jewish and Israeli Arab mobs. 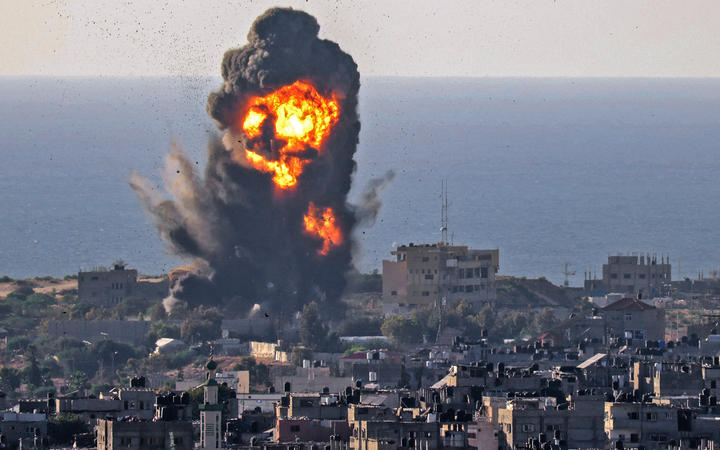 Smoke billows from an explosion following an Israeli air strike in Rafah in the southern Gaza Strip on Thursday. Photo: AFP

Deaths continue to mount, with at least 83 people now killed in Gaza and seven in Israel.

Israel said it had been targeted with 1,600 rockets. It is now mulling a possible ground operation in Gaza and has sent reinforcements to the border.

This is now the worst violence since 2014, fuelled initially by weeks of Israeli-Palestinian tension in East Jerusalem which led to clashes at a holy site revered by both Muslims and Jews. This spiralled into an incessant exchange of Palestinian rocket fire and Israeli airstrikes.

The fear among civilians on both sides is taking its toll.

Najwa Sheikh-Ahmad, a Gaza mother, said of Wednesday night: "You cannot sleep... In any moment your home might be your grave.

"You cannot be secure. As a mother it's very terrifying, it's very exhausting for my feelings, for my humanity," she told the BBC's Today programme.

In Israel, an apartment block was destroyed in the city of Petah Tikva shortly after residents had gone to their bomb shelters.

"We heard an alarm and suddenly there was a bang. Smoke entered the shelter, and the neighbour next to me who was sitting on a chair flew back," one resident told the news website Ynet.

Mohammed Abu Rayya, a doctor living in Gaza told the BBC: "[There are] a lot of deaths, a lot of wounded - children, old women and old men. We cannot sleep at home, we are not feeling safe. Air strikes all over Gaza. There are not any places safe."

Authorities in Gaza, which is controlled by the Islamist militant group Hamas, say many civilians have died, including 17 children. 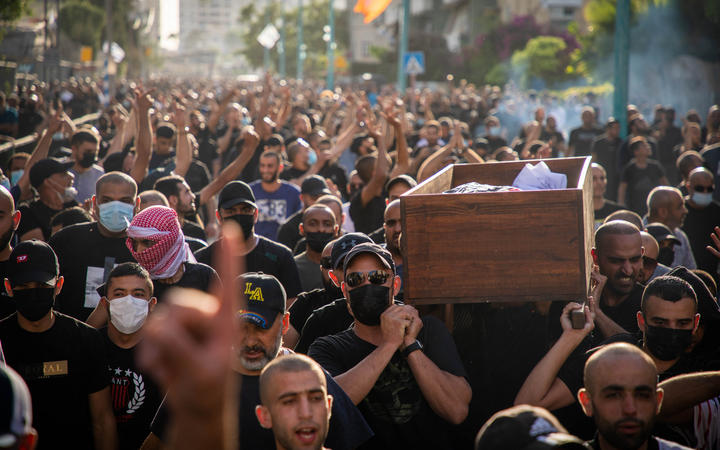 Palestinians carry the coffin of Palestinian Musa Hassune who was killed by an Israeli gunman's fire. Photo: AFP

Israel says dozens of those killed in Gaza were militants, and that some of the deaths are from misfired rockets from Gaza.

The Israel Defense Forces (IDF) said they had struck Hamas targets more than 600 times. They said they had targeted homes and businesses used by militants and a school Hamas was using "to hide a terror tunnel".

In the Israeli city of Sderot, a young boy was killed when rocket fire from Gaza hit his home, and shrapnel penetrated the shelter he was hiding in.

The escalating conflict has prompted international airlines, including KLM, British Airways and Virgin Atlantic, to suspend services to Israel. Earlier on Thursday, incoming flights were diverted south from Tel Aviv's main Ben Gurion airport to Ramon airport amid a flurry of rocket launches. 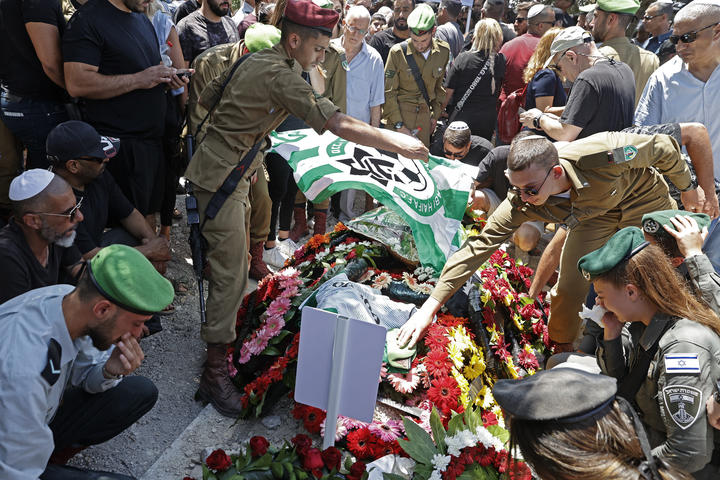 Mourners attend the funeral of an Israeli soldier, who the army said was killed when Palestinian militants fired an anti-tank missile near the border. Photo: AFP

On Thursday, the Israeli army will put forward plans for a possible ground offensive in Gaza, which needs to be approved by army chiefs and various levels of government before any operation begins.

Israel has also called up 10 reserve border patrol companies to help tackle the worst unrest between Arab and Jewish communities for many years.

Israeli political leaders have appealed for calm, following the wave of street violence. President Reuven Rivlin described the outbreaks of rioting in several towns and cities as "senseless civil war".

More than 400 people have been arrested, with some as young as 13 years old, Israeli police said.

A senior Hamas official said the group was ready for a "reciprocal" ceasefire if the international community pressures Israel to "suppress military actions" at the disputed Al-Aqsa Mosque in Jerusalem.

Large crowds gathered again at the mosque on Thursday, to mark the first day of the Eid al-Fitr Muslim festival, which signifies the end of the Islamic holy month of Ramadan.

However, Israeli military spokesman Hilda Zilberman said Israel was not seeking a ceasefire at the current time, the Times of Israel reports.