A man has been ordered to pay $US12 million for his role setting a Minneapolis police station on fire during protests last May.

A man has been ordered to pay $US12 million ($NZ16.5m) for his role setting a Minneapolis police station on fire during protests last May. 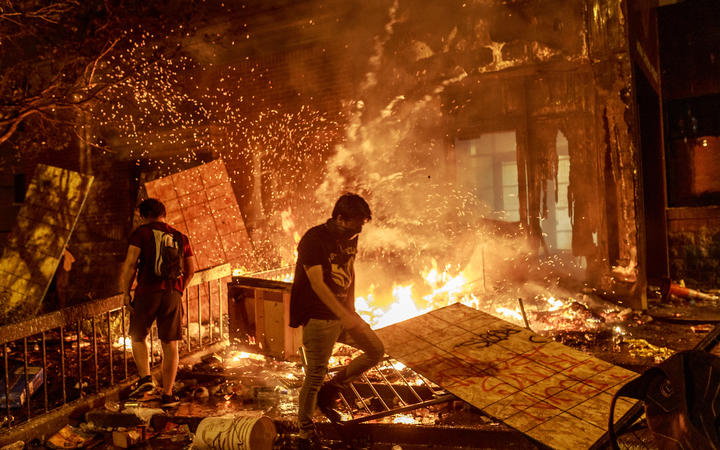 Protesters walk past burning debris outside the Third Police Precinct on 28 May 2020 in Minneapolis, Minnesota, during a protest over the death of George Floyd. Photo: AFP

The fine for Dylan Shakespeare Robinson, 23, who pleaded guilty to an arson charge in December, will follow a four year prison sentence.

Robinson's lawyer has said "there is no realistic chance" his client will be able to afford the fine.

Three other men who also pleaded guilty will be sentenced at a later date.

What happened to the police station?

In May of last year, thousands of people took to the streets of Minneapolis to protest the death of George Floyd that occurred while in police custody.

Minneapolis police officer Derek Chauvin, who was later fired and found guilty of murder, was filmed kneeling on Floyd's neck for more than nine minutes during his arrest.

Floyd's death and the subsequent protests triggered weeks of unrest, and the city saw looting, arson and violence.

Among the demonstrators was Dylan Robinson of Brainerd, Minnesota, a town about 120 miles north of Minneapolis.

According to prosecutors, Robinson lit a Molotov cocktail which another person then threw at the Minneapolis Third Precinct headquarters - setting the building ablaze.

Surveillance video at the precinct shows Robinson lighting an "incendiary device" held by another person and later setting a fire inside the station near a first floor stairwell, officials said.

"Mr Robinson chose to depart from lawful protest and instead engaged in violence and destruction," said acting US Attorney Anders Folk in a statement. The arson "put lives at risk and contributed to widespread lawlessness in Minneapolis".

Robinson pleaded guilty to one count of conspiracy to commit arson.

Three other men - Bryce Michael Williams, 27, Davon De-Andre Turner, 25, and Branden Michael Wolfe, 23 - pled guilty to the same charge as part of a plea agreement. They have yet to be sentenced.

Robinson's lawyer, who is representing all four men, said that the 23-year-old has been unfairly singled out among thousands of others involved in the riots last year.

"He is bearing the sentence for the other thousand people who participated," attorney William Mauzy told the New York Times on Wednesday. "Many others, far more culpable than Mr Robinson, were not identified."

How will the fine be paid?

In addition to his four-year jail term, Robinson has been fined $US12m in damages.

According to the US Attorney's office, which prosecuted the case, the restitution will be collected in a variety of ways, including wages, bank accounts, retirement garnishments and a monthly pay plan typically set by a judge.

Robinson will only be able to pay a "miniscule amount toward that", his lawyer Mr Mauzy said, adding that he expected the three other defendants to be ordered to pay a portion of the damages fee.

"None of the defendants have an ability to pay a significant sum," he said.

The US Attorney's office did not respond to an immediate request for comment on how Robinson may be able to afford the fine.

Michael Paul, of the FBI's Minneapolis field office in a statement, insists the high fine is fair.

"The danger posed by the defendant in this case was very real," he said.

The sentencing "sends a clear message" that when someone conducts a violent act that breaks federal law, they will be held accountable, Paul said.

It is not the first time a US court has imposed such a large sum. In 2018, a judge in Oregon ordered a 15-year-old to pay more than $36m (£27m) after he admitted to starting a forest fire that raged for months.

A lawyer for the 15-year-old called the amount "absurd" and "absolutely silly".

In his ruling, the judge said the figure was "clearly proportionate to the offence", because it did not exceed the financial damages caused by the fire.

But the judge also acknowledged that the Oregon teen would not be able to pay the full amount, citing "safety valves" in state law that allows juvenile offenders to stop payments after 10 years if they finish probation and do not commit any other crimes.

It is not clear if Robinson, who is not a juvenile offender, will be treated with similar leniency.