A US federal investigation has been launched into policing practices in the city of Minneapolis, a day after one of its former officers was convicted of the murder of George Floyd. 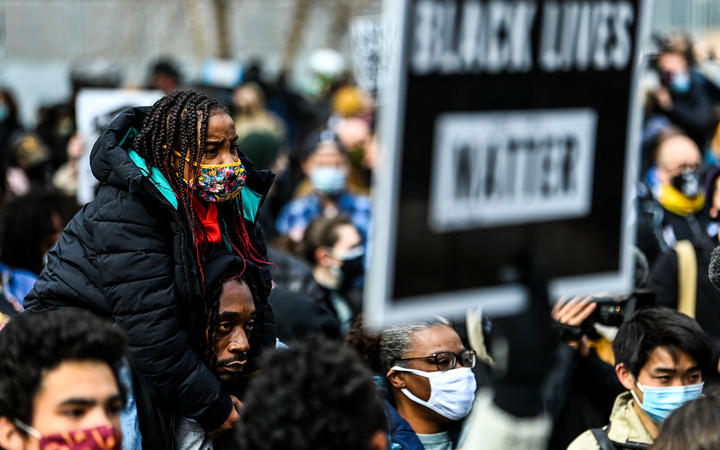 People react as the verdict is announced in the trial of former police officer Derek Chauvin outside the Hennepin County Government Center in Minneapolis, Minnesota, on 20 April. Photo: AFP

The Department of Justice will look at whether there has been a pattern "of unconstitutional or unlawful policing", Attorney General Merrick Garland said.

It follows national outrage over the killing of Floyd by Derek Chauvin.

The former officer was convicted of all charges against him on Tuesday.

Chauvin was filmed kneeling on Mr Floyd's neck for more than nine minutes during an arrest in May 2020. Floyd, an unarmed African American, was pronounced dead an hour later.

His death sparked protests across the US and worldwide, and calls for police reform.

Tuesday's verdict has been widely welcomed in a country where police are rarely been convicted - if they are charged at all - for deaths which occur in custody.

But Garland told reporters that he knew the verdict would not "address potentially systemic policing issues in Minneapolis".

What will the investigation look at?

The attorney general said the investigation would "include a comprehensive review of the Minneapolis Police Department's policies, training, supervision and use-of-force investigations".

It will also examine "whether its treatment of those with behavioural health disabilities is unlawful", while looking at the "effectiveness of current systems of accountability and whether other mechanisms are needed to ensure constitutional and lawful policing".

Garland said both the community and law enforcement would have to take part if the investigation were to be a success, and he had already started reaching out to both.

If unlawful patterns or practices were found, he promised to issue a public report and bring a civil lawsuit.

What happened to George Floyd?

Police were called after a shop assistant believed 46-year-old Floyd had used a counterfeit note to buy cigarettes.

Floyd then refused to get into the police car, resulting in him being pinned to the ground with Chauvin pressing his knee to the back of Mr Floyd's neck for more than nine minutes.

Floyd repeatedly told the officer he could not breathe during this time.

How have people reacted?

The conviction has been hailed as a watershed moment, and welcomed by thousands who took to the streets.

"Being able to know there is justice for African American people, just people of colour, period, in this world," Philonise Floyd, Floyd's brother, said. "This is monumental. This is historic. This is a pivotal moment in history."

But many point to the fact that this is just one case. The fatal shooting of Duante Wright - another unarmed African American man - during a traffic stop on 11 April has once again highlighted the fact that black people are more likely to be shot dead by police in the US than people of other races.

The video of Floyd's killing last May prompted outrage around the world, setting off days of demonstrations which spread across the entire US, with reformation of police departments at the heart of protesters' demands.

His successor Joe Biden has struck a different tone, welcoming the conviction of Chauvin on Tuesday, saying it "can be a giant step forward in the march toward justice in America".

Former long-serving Minnesota attorney general Lori Swanson said it was a very significant step which may result in recommendations for broad reforms to prevent abuses.

"The city typically would follow them but if it didn't then the US Department of Justice even has authority to file a lawsuit against the city of Minneapolis."

Swanson said the investigation that ultimately led to the charges against Derek Chauvin and other officers, and the prosecution itself, was conducted by the state of Minnesota, not the police department.

"I think in the case of George Floyd what made a big difference was that bystander videotape.

"In this case it took a 17-year-old girl having the presence of mind to make a video. Her video showed something far different that what that initial statement the Minneapolis police department put out which … completely minimised and ignored what really happened."

She said reforms had been passed by the state legislature.

"For example in the wake of the killing of George Floyd in Minnesota [the Minnesota] legislature looked at changes. One of them that was passed last year required police officers to intervene if they see another police officer engaged in misconduct which is certainly one positive step forward."