The United Nations food agency, the World Food Programme (WFP), won the Nobel Peace Prize for its efforts to combat hunger and improve conditions for peace in conflict-affected areas. 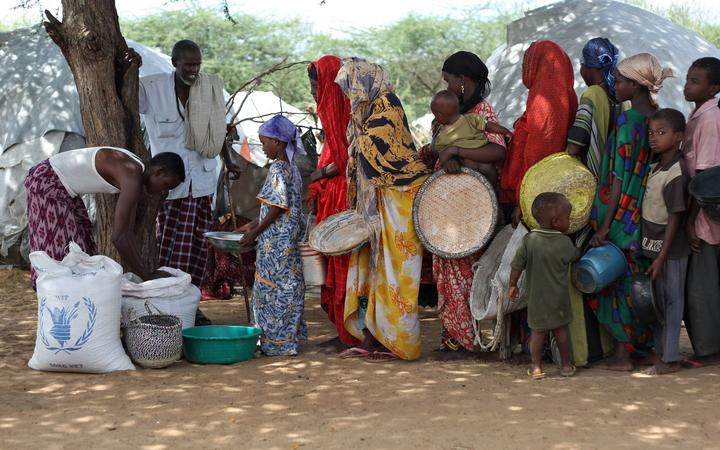 People line up to receive food aid distributed by the World Food Programme at one of the camps in Mogadishu in 2009. (File photo). Photo: AFP

The Rome-based organisation says it helps some 97 million people in about 88 countries each year and that one in nine people worldwide still does not have enough to eat.

"The need for international solidarity and multilateral cooperation is more conspicuous than ever," Chairwoman Berit Reiss-Andersen of the Norwegian Nobel Committee told a news conference.

The prize is worth 10 million Swedish crowns (approx $NZ1.7m) and will be presented in Oslo on 10 December.

This year, there were 318 contenders - 211 individuals and 107 organisations.

Among them were Greta Thunberg, Jacinda Ardern, WHO, the European Court of Human Rights, Julian Assange, Edward Snowden and Chelsea Manning, the "people of Hong Kong" and jailed Saudi activist Loujain al-Hathloul.

Ardern was also nominated last year for the work she did to unite the country following the 15 March mosque attacks in Christchurch.

In the past, three New Zealanders have won the Nobel Prize for Science. They include Ernest Rutherford chemistry, 1908; Maurice Wilkins, physiology or medicine, 1962; and Alan MacDiarmid, chemistry, 2000.

The 2019 Nobel Peace Prize was presented to Ethiopian Prime Minister Abiy Ahmed who made peace with bitter foe Eritrea.

A Norwegian lawmaker has nominated Donald Trump for the Nobel Peace Prize for 2021 for helping broker a deal between Israel and the United Arab Emirates, the second time he has put forward the US president for the honour.

How the winner is decided

The prize should go to the person "who has done the most or best to advance fellowship among nations, the abolition or reduction of standing armies, and the establishment and promotion of peace congresses", according to the will of Swedish industrialist Alfred Nobel, the inventor of dynamite, who founded the awards.

Thousands of people can propose names: members of governments and parliaments; current heads of state; university professors of history, social sciences, law and philosophy; and former Nobel Peace Prize laureates, among others.

The Norwegian Nobel Committee, which consists of five individuals appointed by the Norwegian Parliament. They are often retired politicians, but not always. The current committee is led by a lawyer and includes two academics.

They are all put forward by Norwegian political parties and their appointments reflect the balance of power in parliament.