US President Donald Trump has completed his course of treatment for Covid-19 and can return to public engagements this weekend, his physician has said. 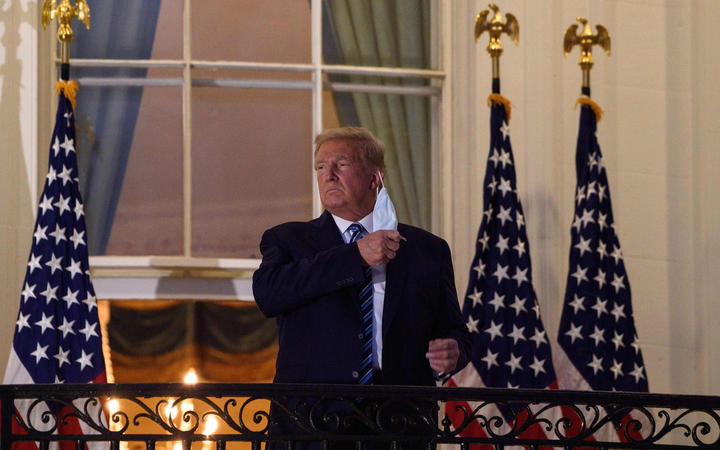 Dr Sean Conley said the president had responded "extremely well" to medication and had "remained stable".

Trump earlier pulled out of next Thursday's TV debate with Democratic rival Joe Biden after organisers said it would have to be a virtual event.

The move sparked a row about how and when further debates would take place.

In a memo released by the White House on Thursday evening, Dr Conley said Trump was displaying no signs "to suggest progression of illness".

"Saturday will be day 10 since [last] Thursday's diagnosis, and based on the trajectory of advanced diagnostics the team has been conducting, I fully anticipate the president's safe return to public engagements at that time," the memo added.

Earlier, Conley said that if the president's condition remained the same or improved throughout the weekend and into Monday, "we will all take that final, deep sigh of relief".

What about the presidential debates?

On Thursday, the commission organising the second presidential debate in Miami on 15 October said it would have to take place remotely because Trump had tested positive for coronavirus.

In response, Trump said he was "not going to waste my time on a virtual debate".

At the moment, it appears a debate could take place on 22 October, although in what form remains to be seen.

The first presidential debate on 29 September had descended into insults and interruptions. The vice-presidential debate, held on Wednesday night between Mike Pence and Kamala Harris, was a far more measured affair.

The US election will be held on 3 November. Latest opinion polls suggest Biden has a high single digit lead nationally, but the outcome is often decided in battleground states where the races can be much closer.

Six million ballots have already been cast in early voting.

How did the debate row unfold?

It began with the Commission on Presidential Debates announcing candidates would take part in the Miami debate "from separate remote locations... to protect the health and safety of all involved".

This infuriated the president who, in a phone-in interview with Fox Business Channel, said he was not prepared to "sit behind a computer, ridiculous".

Joe Biden said the president "changed his mind every second" and his campaign team added that Trump "clearly does not want to face questions from the voters".

The Trump campaign answered back, with manager Bill Stepien saying the commission's decision to "rush to Joe Biden's defence" was "pathetic," adding that Mr Trump would hold a rally instead on the same date.

The Biden team then proposed the town-hall style debate, set for Miami, should go ahead on 22 October instead.

This brought a brief moment of agreement, on the date at least.

However, the Trump team said there should be a third face-to-face debate - on 29 October, just five days before polling.

But the Biden team said that debates could only be scheduled on the three dates already agreed: 29 September, 15 October and 22 October.

On 15 October, Biden will now take part in his own primetime event on ABC answering questions from voters.

Quite what format any Biden-Trump debate takes now is hard to pin down.

What else did Trump say on Fox?

Addressing the issue of his health, Trump said: "I'm back because I'm a perfect physical specimen."

He said he had stopped taking most "therapeutics" but was still taking steroids and would be tested for Covid again "soon".

But although his doctor has said he now has no symptoms, questions still remain about when the president first became infected and whether he could still be contagious.

And although the names of many people who have interacted with the president and tested positive are now known, it remains unclear just how many were exposed at the White House. New Covid safety measures are in place there.

One of the top Republicans, Senate majority leader Mitch McConnell, said on Thursday that he had not been to the White House since 6 August because its approach to handling Covid with social distancing and masks was "different from mine and what I suggested we do in the Senate".

Trump said on Thursday that "somebody got in and people got infected" but gave no more details.

A gathering on 26 September announcing Trump's Supreme Court pick has been seen as a possible "super-spreader" event, with several attendees known to have tested positive.