Thousands of people took to the streets of the Belarusian capital, Minsk, in protest at the abrupt inauguration of veteran President Alexander Lukashenko earlier in the day. 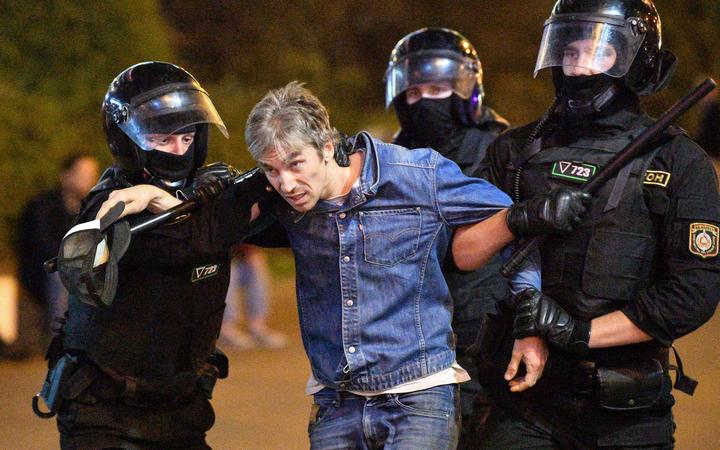 A protester is detained by police during street protest in Minsk after the swearing in of President Alexander Lukashenko for a sixth term. Photo: AFP

There were reports of beatings and detentions by police, and video footage showed water cannon being used.

The country's electoral commission said Lukashenko won more than 80 percent of the vote, triggering weeks of mass protests across the country.

Several EU countries and the United States say they do not recognise Lukashenko as the legitimate president of Belarus. 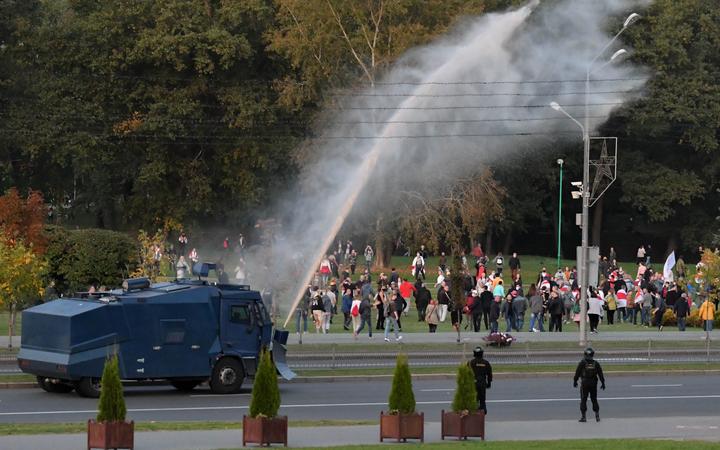 Water cannon is used against some of the protesters in Minsk. Photo: AFP

Instead, state news agency Belta reported today: "Alexander Lukashenko has taken office as President of Belarus. The inauguration ceremony is taking place in these minutes in the Palace of Independence."

Lukashenko, who has ruled the former Soviet republic for 26 years, said Belarus needed security and consensus "on the brink of a global crisis", an apparent reference to the coronavirus pandemic, Belta reported.

"I cannot, I have no right to abandon the Belarusians," he added. 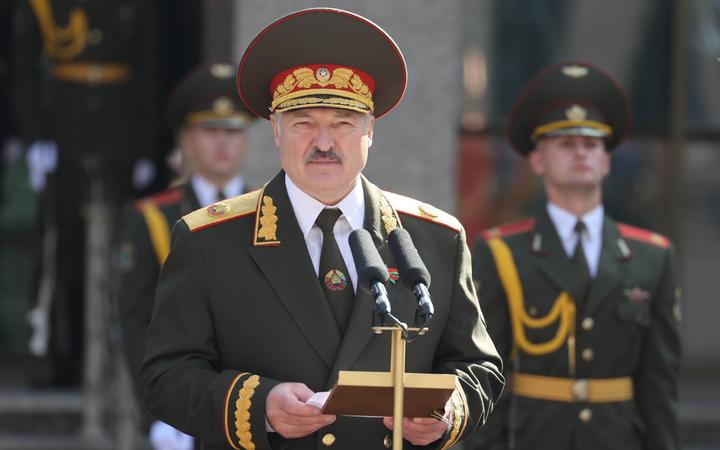 President called 'a bandit and fraudster' 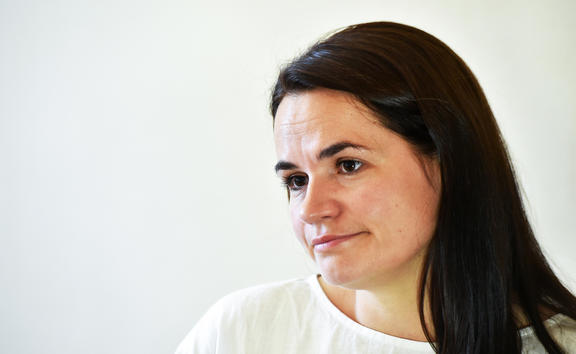 "Starting from this very day, he [Lukashenko] officially becomes a bandit and fraudster who is not recognised anywhere in the civilised world," the channel said.

Protesters marched to the centre of Minsk, some wearing fake crowns to mock the inauguration. One placard read: "The king has no clothes!"

But there is a heavy police presence and a number of people have been detained.

Lukashenko's main political rival, Svetlana Tikhanovskaya, who fled to neighbouring Lithuania amid mass arrests, said "after today [he] is neither a legal nor a legitimate head of Belarus".

Fellow opposition politician Pavel Latushko posted on social media: "Where are the jubilant citizens? Where is the diplomatic corps?"

"It is obvious that Alexander Lukashenko is exclusively the president of the Omon (riot police) and a handful of lying officials."

He called for "an indefinite action of civil disobedience".

Meanwhile, Lithuanian Foreign Minister Linas Linkevicius described the inauguration as a "farce" and "illegitimate" on Twitter.

Lukashenko, 66, claimed a sixth term as president in the widely disputed election of 9 August. He insisted that he had won fairly with 80 percent of the vote and depicted the protests against him as a Western-backed plot. Earlier this month, he secured a $US1.5 billion ($NZ2.3b) loan from Russia.

Tikhanovskaya claims to have won 60-70 percent in places where votes were properly counted.

Many opposition figures are now in self-imposed exile in neighbouring countries amid a wave of arrests.

Despite the crackdown, anti-government protests show no signs of diminishing. On Sunday, a crowd of about 100,000 people staged another rally in the capital, demanding that Lukashenko step down.