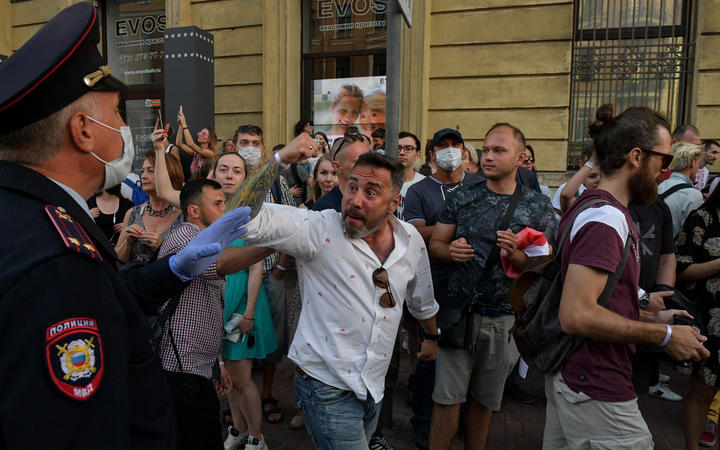 People react outside the Belarusian embassy after a polling station was closed during Belarus' presidential election. Photo: AFP

In Minsk, police used stun grenades to disperse crowds in the city centre. There have been reports of injuries.

Main opposition candidate Svetlana Tikhanovskaya said she did not trust the figures which gave her 7 percent.

"I believe my eyes, and I see that the majority is with us," she said at a news conference on Sunday evening.

The opposition had said it expected the vote to be rigged, saying it would keep an alternative count of the votes.

Tikhanovskaya, 37, entered the election in place of her jailed husband and went on to lead large opposition rallies.

Lukashenko, in power since 1994, has vowed that the situation in the country will remain "under control".

The lead-up to Sunday's poll saw a crackdown on activists and journalists amid the country's biggest opposition demonstrations in years.

In Minsk, clashes were reported near the Minsk-Hero City monument in the city centre late on Sunday. 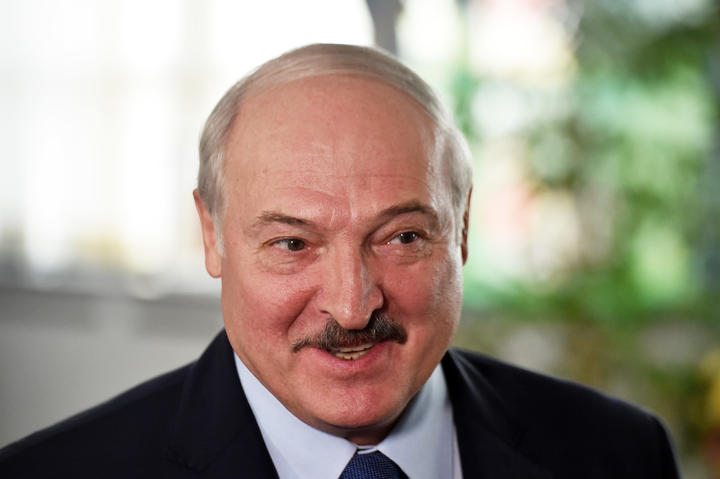 Several ambulances were seen rushing to the scene.

Footage has emerged of protesters fighting riot police in the capital, and media reports say a number of people have been arrested.

Referring to Lukashenko, crowds on the streets have been chanting "Go away!"

Similar protests are being staged overnight in Brest and Zhodino.

Internet monitoring group NetBlocks earlier said connectivity had been "significantly disrupted" across Belarus, with the situation worsening throughout the day and creating an "information vacuum".

Sometimes referred to as Europe's last dictator, President Lukashenko, 65, was first elected in 1994.

In the last vote in 2015, he was declared winner with 83.5 percent of the vote. There were no serious challengers and election observers reported problems in the counting and tabulation of votes.

This year's election is being held amid growing signs of frustration at his leadership. 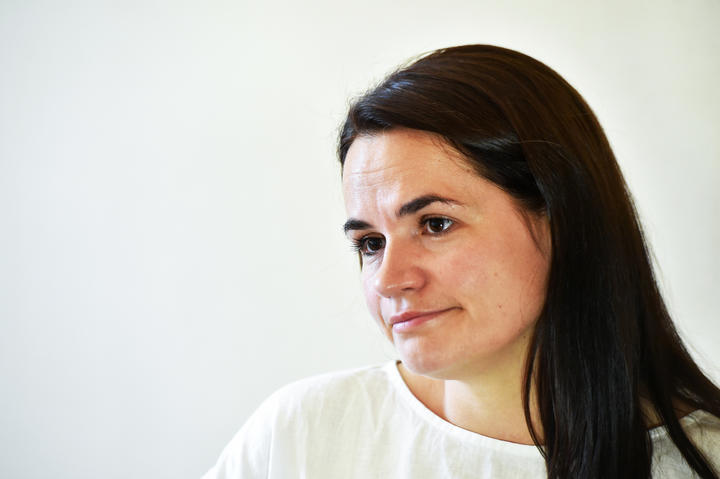 The campaign saw the rise of Tikhanovskaya, a former teacher who became a stay-at-home mother until she was thrust into the political spotlight.

After her husband was arrested and blocked from registering for the vote, she stepped in to take his place.

In the lead-up to the election she told the BBC that people in Belarus did not believe the election would be run fairly.

"But I still believe that our president will understand that his time is over. People don't want him anymore," she said.

Tens of thousands defied an escalating crackdown on the opposition last month to attend a protest in the capital Minsk, the largest such demonstration in a decade.

Since the start of the election campaign in May, more than 2000 people have been detained, according to Human Rights Centre Viasna.

On the eve of the vote, Tikhanovskaya's team said her campaign manager had been arrested and would not be released until Monday.

On Sunday, as people voted, internet service was "significantly disrupted" according to online monitor NetBlocks. Opposition supporters say this makes it harder for evidence of election fraud to be collected and shared.

There were already concerns over a lack of scrutiny because observers were not invited to monitor the election and more than 40 percent of votes were cast ahead of election day.