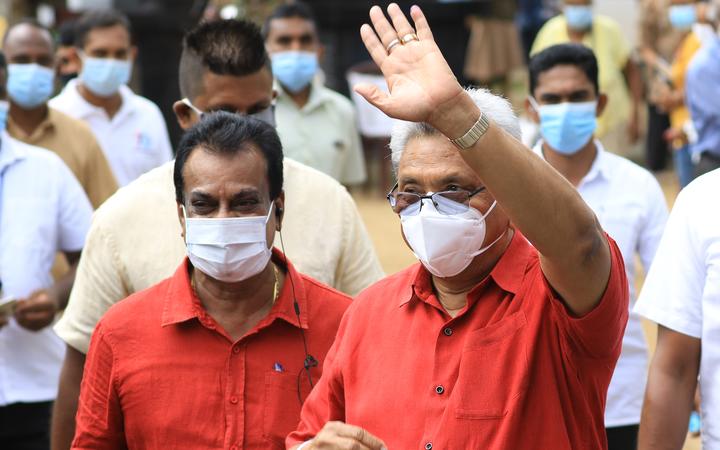 Sri Lankan president Gotabaya Rajapaksa wearing a face mask gestures as he leaves after casting his vote for the parliamentary election at a polling station in Colombo. Photo: AFP / Tharaka Basnayaka / NurPhoto

His brother Mahinda Rajapaksa is expected to be installed as prime minister, having held the role as caretaker since November.

The brothers' party, Sri Lanka People's Front, has secured a two-thirds "super majority" of seats needed to carry out its promised constitutional changes.

Thank you PM @narendramodi for your congratulatory phone call. With the strong support of the people of #SriLanka, I look forward to working with you closely to further enhance the long-standing cooperation between our two countries. Sri Lanka & India are friends & relations. pic.twitter.com/9YPLAQuVlE

The controversial Rajapaksa family has dominated Sri Lankan politics for two decades. Mahinda Rajapaksa was previously president, from 2005 to 2015.

The opposition of former prime minister Ranil Wickremesinghe has been trounced, having lost all but one of the 106 seats it held in the outgoing parliament.

The main opposition party is now a new group established by the son of Ranasinghe Premadasa, a former president who was assassinated in 1993.

Gotabaya is hugely popular among the Sinhala majority for crushing the Tamil Tiger separatist rebels in 2009 when he was defence secretary. Many in the country also credit his administration for bringing stability and successfully containing the coronavirus outbreak.

Sri Lanka has been one of the few nations to hold an election despite the coronavirus pandemic. The vote had already been postponed twice because of the virus.

The country has had relatively few confirmed infections and deaths of coronavirus - with a total of 2839 cases and 11 deaths.

A surge in Sinhala nationalism in the run-up to the election also worried Sri Lanka's minority communities.

Muslim leaders said their community was still reeling from the vilification that followed the devastating Easter Sunday suicide attacks by Islamist militants last year which killed more than 260 people.

With their dominant majority, the Rajapaksas could attempt to change the constitution and increase the powers of the president, reversing the work of the previous government to introduce more checks and balances.

Activists, already alarmed by the diminishing space for dissent and criticism, fear such an eventuality could lead to ever greater authoritarianism.