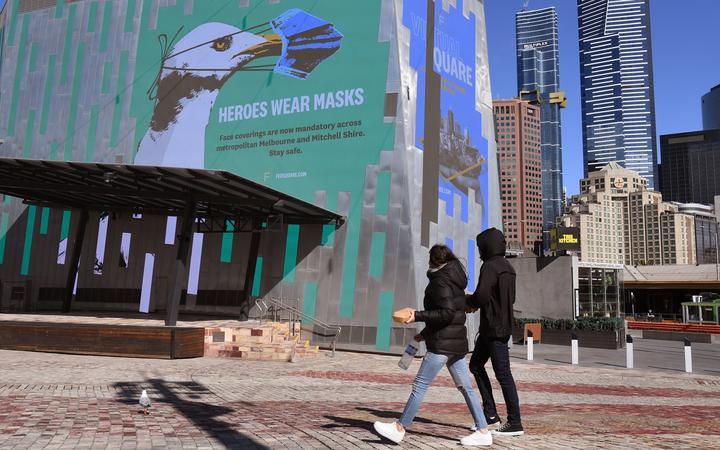 A sign in Federation Square urges people to wear a mask in Melbourne's CBD on 6 August. Photo: William West / AFP

Some 139 of the new cases were healthcare workers, and they brought the overall cumulative confirmed cases in Victoria to 13,867.

There were 11 further deaths, seven of which were connected to aged care, bringing the state's total to 181.

"We of course send our best wishes and our sympathies to the families of those Victorians," Premier Andrews said.

"Our nurses, doctors, ambulance, paramedics, cooks, cleaners, orderlies, ward clerks, everybody in our hospital system, they are not the front-line. They are the last line of defence. 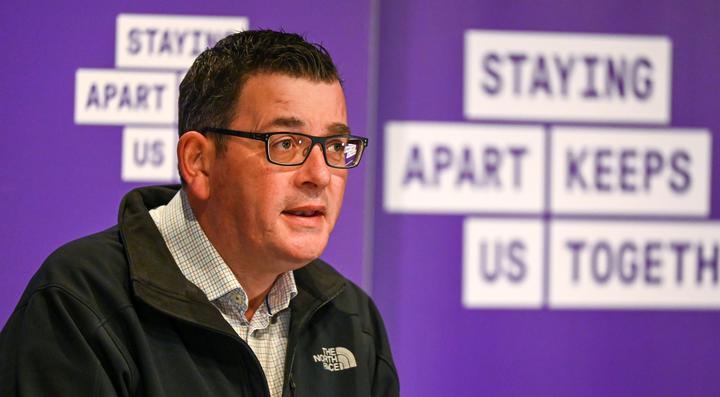 "I would just ask all Victorians to follow the rules to protect themselves but also to protect our dedicated healthcare team."

Andrews said the combined ADF and Department of Health door-knocking efforts - visits to confirm Victorians who should be isolating at home are doing so - reached 1150 homes yesterday. Of those, roughly 1000 people were at home.

"I'm very grateful to those Victorians who are doing the right thing and are where they should be, and that is away from other people, isolated at home, doing everything they possibly can to look after themselves, of course, but to look after everybody else by not spreading this virus, by not coming into contact with others."

More than 500 thousand more Victorians will be eligible for Australia's "JobKeeper" wage subsidy, under changes worth an extra $15 billion.

Businesses will only need to show their GST turnover has fallen over one quarter, instead of multiple, to be eligible for the scheme's extension.

Elsewhere in Australia, Queensland will close its borders to NSW and the ACT from 1am Saturday. NSW reported 11 new cases as of 8pm yesterday.

The Australian National Cabinet also met today to discuss the response to outbreaks in aged care homes and the broader crisis in Victoria.