Human rights activists and monitors say there is growing evidence of police brutality against people who have been detained in Belarus as protests over the disputed election continue. 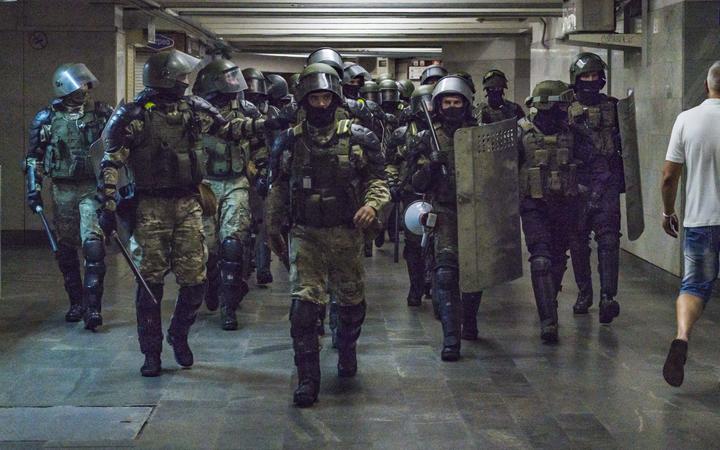 Some of the 6700 people detained since Sunday have been released and allege mistreatment, including beatings.

Belarus has seen five days of protests amid widespread allegations of vote rigging.

After Sunday's vote, President Alexander Lukashenko was declared the victor by election authorities, although supporters of the main opposition figure, Svetlana Tikhanovskaya, insist she won.

In a statement on state television, Senate Speaker Natalya Kochanova said the president had ordered an investigation into the mass detention of protesters, and that more than 1000 had been freed.

All the remaining detainees are to be released on Friday morning, Deputy Interior Minister Alexander Barsukov said, while denying that prisoners had been abused.

Some of the released prisoners shared pictures on messaging app Nexta showing their bruised and swollen bodies, including injuries to backs and buttocks, that were allegedly caused by police.

"They beat people ferociously, with impunity, and they arrest anyone. We were forced to stand in the yard all night. We could hear women being beaten. I don't understand such cruelty," one man said as he showed the BBC his bruising. 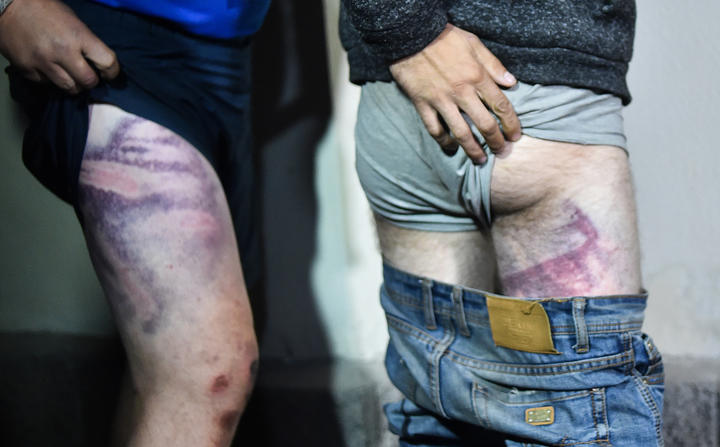 Amnesty International said people who had been arrested described being stripped naked, beaten and threatened with rape.

"Former detainees told us that detention centres have become torture chambers, where protesters are forced to lie in the dirt while police kick and beat them with truncheons," said Marie Struthers, Amnesty International's Director for Eastern Europe and Central Asia.

In audio shared by a BBC journalist, screams could be heard from inside the Okrestina detention centre in the capital Minsk.

Separately, a group of five UN human rights experts said the response of the security forces to peaceful protests had been harsh, with frequent use of excessive, unnecessary and indiscriminate force.

"Authorities only seem interested in quickly dispersing the protests and arresting as many people as possible," they said in a joint statement.

EU foreign ministers are to meet on Friday to consider possible sanctions on Belarus because of the crackdown.

Czech Prime Minister Andrej Babis, quoted by Reuters news agency, said the election "must be repeated, must be transparent and with the presence of foreign observers".

Earlier, Belarus Interior Minister Yuri Karayev said he took responsibility for people being injured during the protests, and that he wanted to apologise to those who got caught up in the violence.

Observers said the official statements and the release of the prisoners suggested a more conciliatory approach following public outrage and international condemnation at the police response.

Officials have confirmed two deaths during the unrest. One demonstrator died during a protest in Minsk on Monday while a man died after being arrested in the south-eastern city of Gomel on Wednesday.

Footage broadcast by messaging app Nexta on Thursday night appeared to show protests continuing in the streets with demonstrators chanting "get out".

Tearful relatives gathered outside a jail north of the capital Minsk, hoping to be reunited with their loved ones or obtain information on their whereabouts.

Several strikes have been reported at state-owned factories, where workers object to the violent treatment of protesters. Hundreds of employees were seen walking out at truck-maker Belaz in Zhodino to the north-east of the capital.

Workers in Minsk and Grodno in the west also organised strikes and walkouts. Women in their thousands carrying flowers formed "solidarity chains" in Minsk and other cities to protest police brutality.

Video footage shared on social media showed opposition figure Maria Kolesnikova joining the female protesters in Minsk, holding a bunch of flowers. She was one of three women who pooled their resources to spearhead the opposition. The other two have left the country.

Veronika Tsepkalo fled Belarus on the day of the vote while the main opposition candidate in the election, Svetlana Tikhanovskaya, was briefly detained on Monday before being forced to leave for Lithuania.

Tikhanovskaya, 37, released a video saying she made the "very difficult decision" to leave because of her children.

The opposition candidate was a stay-at-home mother until she entered the race after her husband was arrested and blocked from registering for the vote.

She became Lukashenko's toughest opposition challenge in years, leading large rallies in the lead up to the vote.

But Lukashenko dismissed her bid, saying a woman could not lead Belarus. Aged 65, he has ruled the former Soviet country since 1994 and has described opposition supporters as "sheep" controlled from abroad.

Medics walked out of hospitals for a second day to join the demonstrations and performers from the Belarusian State Philharmonic held up a message saying "Philharmonia prays for the people".

Russian internet giant Yandex said armed individuals had entered two of its offices in Minsk and barred employees inside from going out. The intruders left some hours later.