The Belarus government has blocked more than 50 news media websites from reporting on how the country has been shaken by two weeks of protests. 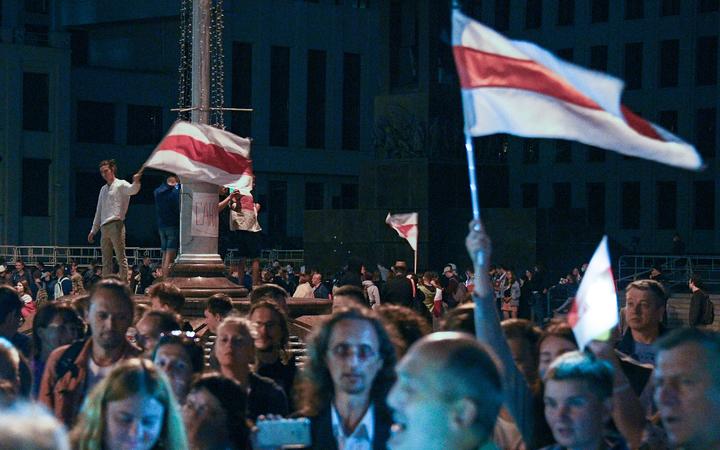 The Belarusian Association of Journalists says the shutdowns include sites for the US-funded Radio Liberty, and Belsat, a Polish-funded satellite TV channel.

Protestors are demanding authoritarian president Aleksandr Lukashenko stands down, after what's widely considered a fraudulent win at the polls.

Claims by Belarusian President Alexander Lukashenko that "foreign powers" are organising a build-up of troops on the country's border are baseless, says Nato.

Dressed in military fatigues, the president said he had placed his armed forces on "high alert".

Protests continued in the streets of Minsk on Saturday following a disputed election two weeks ago.

Demonstrators are demanding that Lukashenko stand down.

The leader, who has ruled Belarus for 26 years, claimed the Nato bloc was trying to split up Belarus and install a new president in Minsk.

He said troops in Poland and Lithuania were readying themselves, and that he was moving his armed forces to the country's western border.

"They are rocking the situation inside our country, trying to topple the authorities," Lukashenko said, adding that he ordered his security chiefs to "take the toughest measures to defend the territorial integrity of our country."

Nato rejected the claim, saying it posed "no threat to Belarus or any other country and has no military build-up in the region. Our posture is strictly defensive".

A Polish presidency official called the suggestion that Poland planned any border destablisation "regime propaganda" by the Belarussians, which was "sad and surprising". "Poland... has no such intention," the official added.

Nato urged Belarus to respect the fundamental human rights of its citizens.

Lukashenko was re-elected president on 9 August but the vote was widely considered to be fraudulent. Protests disputing the result were met with a brutal crackdown that killed at least four people and demonstrators said they have been tortured in prisons and detention centres.

The president has vowed to crush the unrest and has previously blamed the dissent on unnamed "foreign-backed revolutionaries".

On Saturday crowds of protestors waved bright lights from mobile phones and flew Belarusian flags in the streets of Minsk while chanting "freedom".

Police tried to disperse more than 1,000 people gathered in the city's Independence Square, according to Interfax news agency.

A "solidarity" chain of hundreds of people, many wearing white, formed earlier in the day at the busy Komarovka shopping market.

It follows the country's biggest protest in modern history last weekend when hundreds of thousands filled the streets.

Opposition leader Svetlana Tikhanovskaya, who was forced into exile the day after the election, vowed to "stand till the end" in the protests.

She told the BBC that if the movement stopped now, they would be "slaves." "We have no right to step back now," she said.

Tikhanovskaya told the BBC Belarusians had voted for her, not as a future president but as a "symbol of changes".

"They were shouting for their future, for their wish to live in a free country, against violence, for their rights," she said, in her only interview with a Western media outlet.