Fresh strikes are expected in Belarus after a weekend which saw tens of thousands take to the streets to demand the departure of long-term President Alexander Lukashenko. 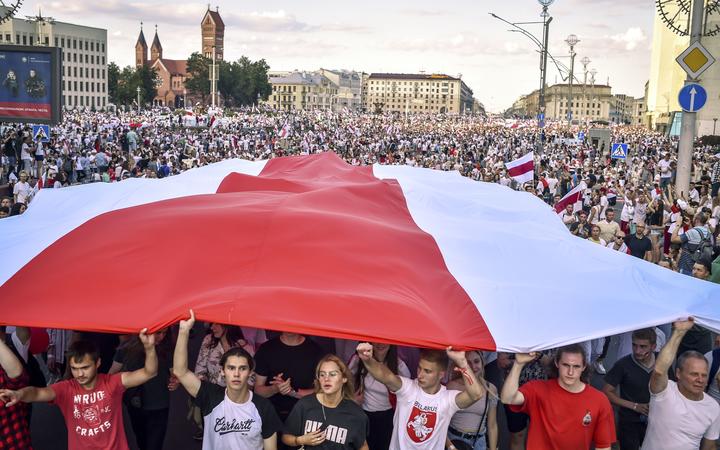 Opposition leaders called for the strikes as anger grew over reports of police violence as well as alleged poll-rigging in the 9 August vote.

Earlier today, the president called on supporters to defend their country and independence.

However, protesters came out in far larger numbers, with local, independent news site Tut.by describing the peaceful demonstration as "the largest in the history of independent Belarus".

After appearing to remain defiant, Reuters is reporting that Lukashenko is tonight saying he's willing to share power and to change the constitution.

He said he's not prepared to make any changes under pressure from protesters, however, work is is already under way on possible changes to the constitution that could redistribute power.

The wave of anger in the country has been rising since the Central Election Commission said Lukashenko, who has been in power since 1994, won 80.1 percent of the vote and the main opposition candidate Svetlana Tikhanovskaya 10.12 percent.

Tikhanovskaya, who left for Lithuania after publicly denouncing the results, insists that where votes were properly counted, she won support ranging from 60 percent to 70 percent.

In a video message released on Monday, she says she is ready to become a "national leader" in order to restore calm and normality, free political prisoners and prepare for new elections.

Meanwhile, some 6700 people have been arrested in the wake of the election, and many have spoken of torture at the hands of the security services.

Among those striking in Belarus are state TV crews. On air this morning? Empty news desks and pop music. pic.twitter.com/1J97OtS2KO

Workers at state-run factories walked out in solidarity with the protesters last week, and more strikes are planned for this week, increasing the pressure on Lukashenko, said the BBC's Kiev correspondent, Jonah Fisher.

Rival rallies were held in the capital, with local media reports suggesting that around 31,000 people took part in the pro-government event. The interior ministry estimated that the number was around 65,000, while a reporter for AFP news agency said the figure was closer to 10,000.

Speaking to supporters, Lukashenko said Belarus would "die as a state" if a re-run of the election were to take place.

"You came here so that for the first time in a quarter-century you could defend your country, your independence, your wives, sisters and children," he said.

He added that the opposition would "crawl like rats out of a hole" if they were not suppressed this time. 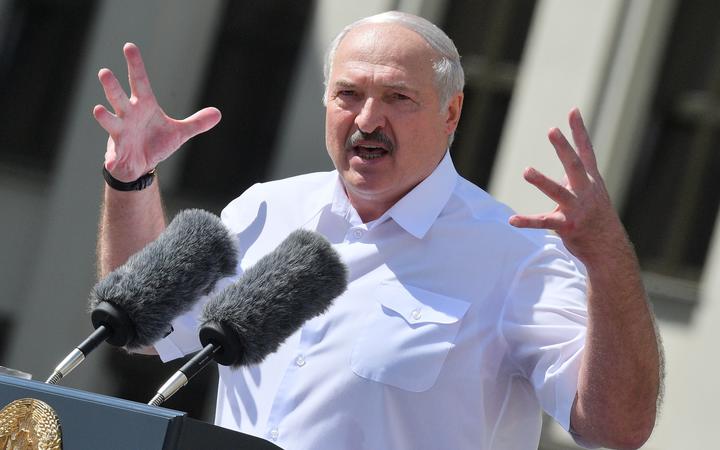 There were reports of state sector workers being forced to attend or face the threat of losing their jobs. For days, workers at state-run factories have staged walkouts and many have joined street marches against the president.

As the president spoke, around 220,000 anti-Lukashenko protesters gathered near the Stela Minsk Hero City World War II memorial in central Minsk, according to Tut.by.

Supporters also turned out in other cities, following a call for weekend rallies from Tikhanovskaya.

A number of officials, as well as current and former police officers, have resigned.

The Belarusian ambassador to Slovakia, Igor Leshchenya, declared his solidarity with the protesters but told the BBC the government did not seem ready to hear them. 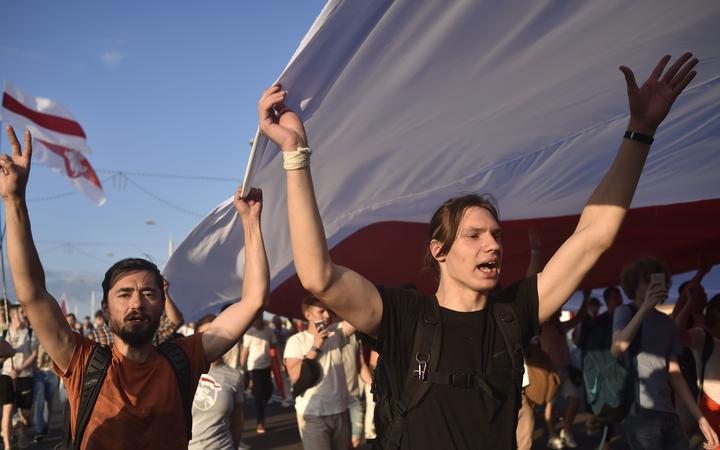 President Lukashenko, who has led Belarus for 26 years, has also faced growing pressure from other European countries.

On Sunday, French President Emmanuel Macron said the EU should "continue to mobilise on the side of the hundreds of thousands of Belarusians who are protesting peacefully for the respect of their rights, liberty and sovereignty".

Germany's Vice-Chancellor Olaf Sholz described Lukashenko as a "bad dictator", telling the Bild newspaper that the Belarusian leader had "lost all legitimacy".

Last week, EU foreign ministers agreed to prepare new sanctions against Belarusian officials responsible for "violence, repression and the falsification of election results". The US condemned the election as "not free and fair". 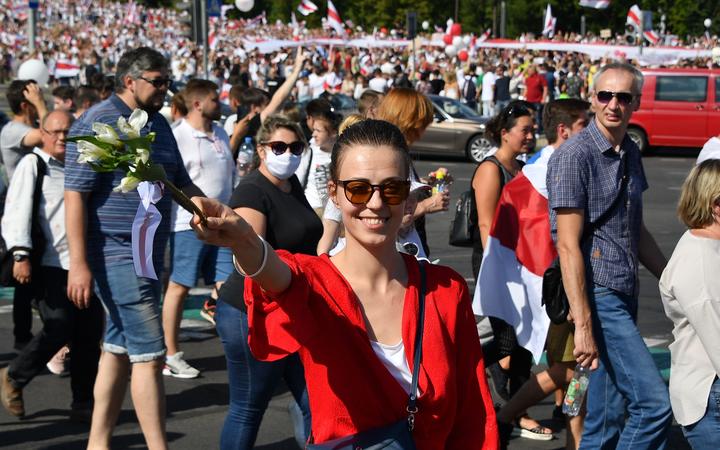 Hundreds of people attended protests in Prague and Warsaw on Sunday.

But Lukashenko has sought Russian help as the unrest continues.

On Saturday, he said President Vladimir Putin had promised to provide what he called comprehensive assistance in the event of external military threats to Belarus.

The two leaders had a second conversation on Sunday, in which the Kremlin said they had discussed "the situation in Belarus, taking into consideration the pressure the republic was being put under from outside".

Putin told Lukashenko Russia was ready to assist Belarus "in accordance with the collective military pact if necessary".

The Belarusian leader also voiced concerns over Nato military exercises taking place in neighbouring Poland and Lithuania, and launched into a tirade against the Western military alliance.